The Parade That is Full of Hot Air

This year, Thanksgiving will be like no other.  But the one thing we can count on is the Macy’s Day Parade. It will be different, that’s for sure. But the parade has proven through the years that it can change with the times.

The first Macy's Day Parade took place on Christmas of 1924.  It was a publicity stunt meant to draw people to the Macy’s store in New York, and the gimmick worked. More than 250,000 people attended that parade and what a parade it was.

Horses pulled the floats along a six-mile route.  Organizers borrowed tigers, elephants, bears, and other wild animals from the zoo and marched them down the street, alongside clowns and people dressed as cowboys. That first parade was so successful, Macy’s decided to make it an annual event.

But already changes  were in the works.  The six-mile route proved to be too much for the animals and their tired roars frightened young children. For that reason, Macy’s decided to do away with the animals, and introduced its first helium balloon in 1926, Felix the Cat.

The balloon was a big hit, and soon other balloons joined Felix.  This solved the problem of frightened children but caused parade planners other headaches.  Having no way to deflate and store the balloons, officials simply let the balloons go and challenged bystanders to capture them.  Anyone doing so would earn a hundred-dollar reward.

The practice almost caused a disaster when the airplane of a student pilot collided with a balloon. The plane plummeted toward the ground, but the instructor was able to save the day.  That was the last year that Macy’s released the balloons.

Wind plays havoc with the balloons and one even caught fire when it hit telephone wires. For that reason, balloons can’t fly if sustained winds reach twenty-three mph.  Rain is another problem.  On two occasions, water collected in the hats of balloon characters and dumped gallons of water on spectators.

The parade was canceled three years during World War II.  Instead of using rubber to create balloons, Macy’s donated 650 pounds of it to the military Today, Balloons are constructed of polyurethane instead of rubber.

Macy’s is second only to the U.S. government in helium usage. During the helium shortage of 1958, parade organizers filled the balloons with regular air and hung them from cranes Balloons require 12,000 cubic feet of helium and it takes 90 minutes to fill each one and 90 handlers to keep it under control.

Handlers can weigh no less than 120 pounds and must be in good health.  Balloon pilots lead the handlers by walking in front.  The job requires them to walk the entire parade route backwards and without falling.  Pilot training is offered three times a year.

The parade was almost canceled following the assassination of John F. Kennedy in 1963, but then organizers decided to go ahead as scheduled.  Macy’s hoped that the parade would raise the national spirit, and it did. We can only hope that our favorite parade will be just as successful in raising spirits this year.

Wishing you and your family a blessed Thanksgiving.

It was just his luck to have a run-in with a trigger-happy damsel. 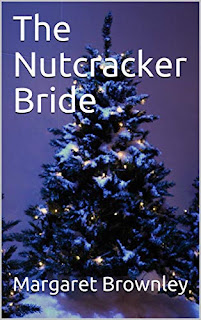 Posted by Margaret Brownley at 3:30 AM