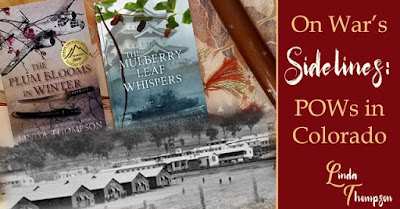 Hi! Some of you might remember me from my roughly year-long stint blogging here on Heroes, Heroines and History a couple of years ago. It is so great to be back to visit with you!

Since both my novels have kicked off with WWII’s dramatic Doolittle Raid, naturally the majority of my posts have centered on that era. I could write any number of posts based on fascinating history I discovered writing my upcoming novel. But today I’ll keep with my WWII trend.

the past, when I thought of prisoners of war, I envisioned them on some distant shore. Scenes from Hogan’s Heroes or The Great Escape or maybe Unbroken or Bridge Over the River Kwai hovered in my mind. But did you know that during World War II, there were hundreds of thousands of Axis P.O.W.s housed in over 700 camps here on the home front?

My two novels are bookends in a sense. The first, The Plum Blooms in Winter, follows a WWII American airman as he makes aviation history in the Doolittle Raid, but then suffers the misfortune to be taken prisoner by Japan. My new release for December, The Mulberry Leaf Whispers, tracks a Japanese naval officer taken prisoner by the U.S., also during the Doolittle Raid. Each of them endures his own form of torment, and in each case, the novels trace how the hand of God lifts him out of despair.

Let me tell you about the merry chase I went on investigating the story of Peggy Covell. I first encountered Peggy in a history book about the Doolittle Raid. And although she only makes a brief appearance in my novel, she served as a key inspiration for it.

Peggy was a “missionary kid” raised in Yokohama, Japan. Tragically, the Japanese army captured and executed her parents in the Philippines. Peggy learned of their wanton execution in the spring of 1944 when she was a senior at Keuka Collage in Keuka Park, New York. As she worked through her grief, she felt the Lord’s leading to do the thing that would stress her forgiveness the most—use her fluent Japanese to serve the people of the very nation that had martyred her parents.

Upon graduation, Peggy moved to Colorado. She encountered a Japanese airman in a P.O.W. camp there, and her example of stunning forgiveness in the face of searing loss made such an impression on the young man that he carried the memory all the way back to Japan with him. He spread the story, and hearing it became a turning point for Fuchido Mitsuo, a famous Japanese war veteran who ultimately became a Christian and a noted evangelist.

Lovely story, right?  If you follow hard after God, you never know what piece of your life He might make use of. The only problem was… when I tried to get to the kind of detail needed to portray Peggy accurately in my novel, whenever I ran across her story the specifics were a little different. About the only fact that seemed to be consistent is that this encounter took place in Colorado. But which camp? And what was Peggy doing there?

I had to get an education on wartime camps in Colorado. Somewhere, I ran across the place name Granada. Granada, Colorado, is the home of “Camp Amache,” which was an internment camp for Japanese Americans.

The consignment of more than 110,000 Japanese Americans—80,000 of them U.S. citizens—to languish in desolate concentration camps thrown together based on an FDR executive order is one of the more sordid chapters in our history. This fact was brought even closer to home for me when I learned that the Gila River Internment Camp, which in its heyday housed 14,000 Japanese Americans—making it the third largest city in Arizona at the time—was located on what is now open desert less than fifteen miles from our home.

A local historical society in Granada has done an excellent job of preserving Camp Amache’s history as a vivid, cautionary reminder. I was able to confirm that yes, Peggy Covell was employed as a social worker there. But they assured me P.O.W.s were never housed at Amache. So how would she have met a Japanese airman?

That’s where a novelist gets to wave her magic wand. But not until I’d learned all I could about P.O.W. camps in Colorado. And after my saddening experience drilling into the unconscionable internment of 110,000 American civilians based solely on their racial heritage, what I learned about our record of kindness in hosting foreign prisoners was heartening.

Japanese P.O.W.s, like my WWII naval officer, were relatively rare in the U.S. The bulk of the prisoners were German—some 371,000 of them, versus 50,000 Italians and fewer than four thousand Japanese.

I visited the site of the former Camp Greeley, which once housed 3600 prisoners. It was truly a small city, with library, hospital, filling station, firehouse, classrooms and theater. Enlisted prisoners were assigned work details as per the Geneva Convention. This system kept them occupied and also helped relieve the extreme wartime labor shortage.

Crews were hired out to local farmers to work the sugar-beet fields. Warm relationships developed between a number of the farm families and the German boys assigned to them. Farm wives treated them to hearty homecooked meals, and a prison orchestra hosted festive concerts open to the people of the town of Greeley. Some prisoners kept in touch with the families for whom they worked for decades after they returned to their home countries!

Sadly, for a Japanese prisoner the relative physical comfort of his situation would have done little to dispel his spiritual distress. They suffered from having it drilled into them that anyone who failed to fight to the death had betrayed their nation, and that capture was the deepest dishonor that could befall a man. Many wished for death. And in at least one case in Cowra, Australia, prisoners staged a banzai suicide charge through the prison perimeter that enabled more than two hundred to find it.

Seldom does a warrior return home unscathed. That’s why I dedicated my upcoming novel “to all the men and women who return from wars forever changed by experiences they will never talk about.” 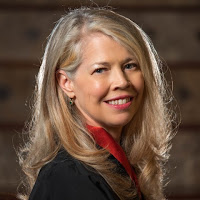 Linda Thompson stepped back from a corporate career that spanned continents to write what she loves—stories of unstoppable faith. Her debut novel, The Plum Blooms in Winter, was a Cascade Award winner and a Christy- and Carol-Award finalist. Linda writes from the sun-drenched Arizona desert, where she lives with her husband, a third-generation airline pilot who is also her Chief Military Research Officer, one mostly-grown-up kid, and a small platoon of housecats. When Linda isn’t writing you’ll find her rollerblading—yes, that makes her a throwback—taking in a dramatic desert moonrise, or enjoying their first grandbaby. 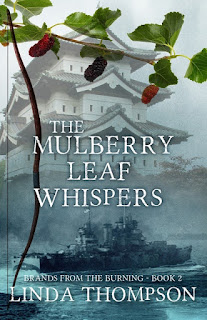 A WWII Japanese naval officer. The teenage daughter of a legendary Christian samurai. Three centuries separate them, but a crucial question binds their destinies together.

Which lives have value?

1587. Bartered off in a peace agreement to the ancient enemies of her illustrious house, is Sono a war prize, a hostage or a bride?

1942. Matsuura Akira’s naval vessel explodes under enemy fire. His honor is eternally decimated. A prisoner’s life is of value to no one—least of all to himself. Can a long-buried truth provide the vital spark that reignites his will to live?

The book is on special $2.99 preorder pricing, only on Amazon Kindle. I’m also offering a suite of pre-order bonuses, details here.