Last month, I shared about the only place in the United States where four states meet at a single point. It's a national monument called Four Corners. If you missed that post, you can read it here: https://www.hhhistory.com/2020/11/four-states-four-tribes-four-corners.html.

Today, since it's December, and we're nearing Christmas, I wanted to share about a historical marker honoring the very first Christmas in Colorado.

So, almost everyone knows about the Louisiana Purchase that occurred in 1803. Well, with that purchase came the need to explore and map out the land. Lewis and Clark were already doing some exploration of the area, but they were primarily traveling to the northwest. President Thomas Jefferson wanted greater detail covered, so he commissioned Army Lieutenant Zebulon Pike to explore the Great Plains and the Rocky Mountains into present-day Colorado. Pike was promoted to Captain during his expedition.
Pike contacted several Native American tribes during his travels and informed them the United States now claimed their territory. Thankfully, he and his men didn't run into too much opposition from the Ute, Cheyenne, Navajo, and Arapahoe, but they were just exploring at the time. 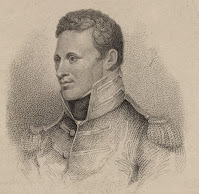 Zebulon Pike's story is frequently told at various museums through Colorado. When you live here, you learn a lot about him, namely his attempt to hike to the top of what is today known as Pike's Peak, named after the Captain. When the Ute Indians settled the area, the peak was called Tava, which is the Ute word for "sun." Throughout its history, Europeans have called the mountain El Capitán, Grand Peak, Great Peak, James Peak, Long Mountain, and Pike's Peak.''
Unfortunately, arriving at the base of the peak in late November resulted in too much snow at the higher elevations of the mountains. Pike and his men saw the peak from the area known as Pueblo, Colorado today. They never made it to the top, as the deep snow and frigid temperatures forced them to turn around. However, they changed course slightly in an attempt to find the headwaters of the Red River (the southern boundary of the Louisiana Purchase), only to end up encountering the Arkansas River at a time when their food supply was perilously low. 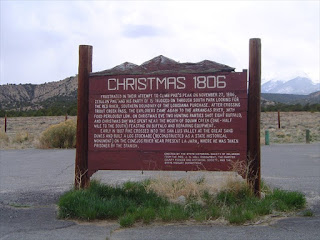 After crossing Trout Creek Pass on Christmas Eve, two hunting parties shot eight buffalo, and Christmas Day was spent near the mouth of Squaw Creek (one-half mile to the south) feasting on Buffalo and repairing equipment. Not exactly a "traditional" Christmas meal, but when you're out on an expedition or traveling in mostly unknown areas, sometimes you have to improvise.
This event became so famous from Pike's journals, they erected a historical marker at the site many years later, and it's still there today.
* * * * * *
NOW, IT'S YOUR TURN
* Have you ever spent Christmas somewhere unexpected? Where was it and why was it unexpected?
* What is the most unusual meal you have eaten on an otherwise traditional day?
* Have you ever been to the top of Pike's Peak?