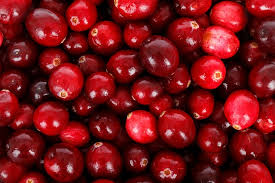 When I start my Christmas baking, one of the first items on my list is Cranberry Orange Bread. It’s been a favorite in our family and one of mine since my grandmother taught me the recipe well over seventy-years ago. When I got out that recipe recently, I began to think about the cranberries and their history. How long have cranberries been around? Were they a part of that first Thanksgiving feast?

What I found out fascinated me, and I decided to share it with our readers. I knew cranberries grew in bogs as I had seen them in Massachusetts when we were there one year. This is what they look like. 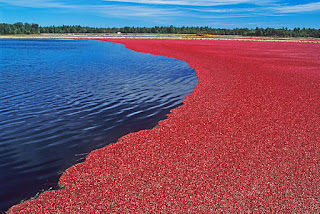 Now, I’ve learned they’ve been around thousands of years of years when glaciers receded and formed cavities in the land.

Wampanoag People of southeastern Massachusetts annually harvested the wild berries, and although they tasted sour, they ate some of them, others they used for dye or dried them to mix with dried meat and animal fat to make a mixture called pemmican that lasted for months. Medicine men even used them in traditional healing rituals.

As early as 1550, James White Norwood wrote about Native Americans using cranberries. It is said that those coming ashore from Europe and England were met by the Native Americans bearing cups full of the berry.

Europeans who settled and explored New England in the 16th and 17th century were already familiar with the berries as they grew in the boggy regions of England. They called them “craneberries” because of their similarity the head of a Sandhill crane. They were also called "bear berries" by the natives because bears liked to eat them.

This is how they looked when growing in those early days in the ponds and bogs when first seen by those early explorers.

Popular legend has it that cranberries were served at that first Thanksgiving meal in Plymouth as the Wampanoag peoples met with them, and cranberries were a part of the food native to the them. Later, in 1648, one of the early preachers, John Elliot wrote about the difficulties the Pilgrims had using their Indian friends in the harvest of the berries. The natives much preferred hunting and fishing to harvesting cranberries. A recipe for cranberry sauce appeared in the Pilgrim cookbook in 1663, and in 1667, ten barrels of berries plus other foods were sent to King Charles as a means of appeasing his anger over some of their activities. An account of Captain Richard Cobb's wedding banquet describes the meal as wild turkey served with a sauce made of wild cranberries growing in the region. 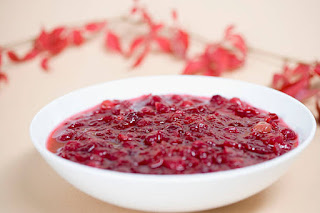 Over the years cranberries became more popular with the settlers for cooking, medicinal purposes, and for red dyes for cloth. Below is a picture of a cranberry harvest in 1880's. Under it is one of cranberries being harvested today. 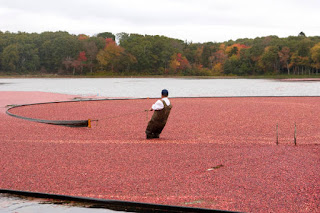 By 1885, Plymouth County boasted 1,347 acres under cultivation; Barnstable County had 2,408. By 1900, the number of acres tripled, making Cape Cod a household name. “Cranberry Fever” struck and the industry boomed. As late as 1927, the cranberry harvest remained so vital to local and state economies that Massachusetts children could be excused from school to work the bogs during harvest season.

About 90% of today's cranberries are wet-picked as seen in the picture above, but 5-10% of the US crop is still dry-picked. This entails higher labor costs and lower yield, but dry-picked berries are less bruised and can be sold as fresh fruit instead of having to be immediately frozen or processed. Originally performed with two-handed comb scoops, dry picking is today accomplished by motorized, walk-behind harvesters which must be small enough to traverse beds without damaging the vines.

Because cranberries are such a big industry today, other businesses have sprung from the popularity of the berry. One of these is Cranberry Glass which is blown with dye added to make the glass the cranberry color. When we were in
Massachusetts, I purchased a few pieces of the glass and keep it on display. 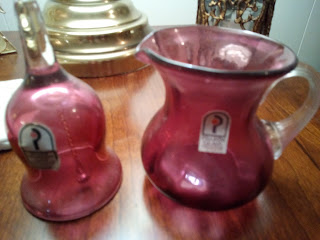 Popular recipes using fresh or dried cranberries or cranberry sauce include bread, muffins, cookies, congealed salads, pies, and cranberry relish. The next time you serve cranberries, think of the long history they've had in our country.

So tell me, what is your favorite cranberry recipe or dish. 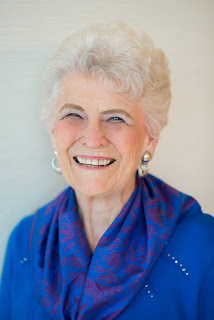 Martha Rogers is a multi-published author with over 50 novels and novellas in print. Martha and her husband Rex live in Houston, Texas where they are active members of First Baptist Church, and Martha co-leads a First Place 4 Health group. They are the parents of three sons and grandparents to 9 grandchildren plus three spouses and great-grandparents to six. Martha is a retired teacher with twenty-eight years teaching Home Economics and English at the secondary level and eight years at the college level supervising student teachers and teaching freshman English.