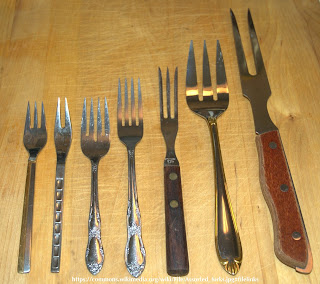 What kid doesn’t like to eat with their fingers? Growing up, my stepdad felt it was bad manners to eat with one’s fingers. There are some things one can’t really eat with anything but their fingers. Crispy bacon—ever tried to eat that with a fork? I have (by force). It didn’t end well, but I proved my point. Grapes, pizza, an apple, a sandwich, french fries, and cotton candy are only a few of the foods best eaten with the ten little digits. 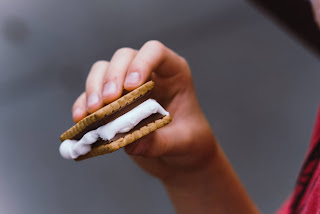 To get around the no eating with your hands at the dinner table rule, I would stealthily wait until my mom picked up her mostly-eaten pork chop in her hands to get the meat clinging to the bone. As soon as she did, I would snatch mine up. Immediately, my dad would say, “Don’t eat with your hands.” To which I would reply, “But Mom is.” Battle won!

But this whole eating with your fingers thing wasn’t always taboo. There was a time when forks were taboo, even thought to be evil—instruments of the devil. So how did forks get such a bad rap?

Before there were forks, people either used their fingers or stabbed their food with a knife and ate off the knife. (My dad would have been horrified. Another table rule was to never eat with your knife or put it in your mouth.) If people had utensils at the table, they would be a knife and a spoon. What one couldn’t stab with the knife, one could scoop up with the spoon, so this extra thing called the fork was superfluous.

The first forks date back to 2400-1900 B.C. China, being made of bone. Ancient Egypt and the Roman Empire both had large forks as cooking utensils.

The Eastern Roman Empire likely gave us the personal table fork, which was in common use there by the 4th century. This instrument wasn’t immediately accepted.

In the Italian Peninsula, the fork came into some use by the 11th century, where upper-class ladies would use it to eat candied fruits. When Princess Maria Argyropoulina married Venetian leader Domenico Selvo, most of Venice was aghast when she brought the fork with her and used it. Saint Peter Damian deemed it was from the devil because it resembled his horns. Seriously. He said it was an affront to God’s intentions for our fingers. When the poor princess died within a couple of years, the saint was deemed correct and the fork disappeared for several hundred years.

It was used by nearly all merchants and the upper class in Italy by 1600. Also, it was proper for guests to arrive with their own fork and spoon in a carrying box called a cadena.

Forks were introduced to French court by Italian noblewoman Catherine de’ Medici when she married King Henry II. Queen Elizabeth I, though she owned forks, preferred to eat with her fingers. She considered “spearing an uncouth action.”

Though forks were in common use in Southern Europe in the 16th century, they didn’t infiltrate to the north until the 18th century. It had been viewed as an unmanly Italian device.

The Roman Catholic Church viewed it as an “excessive delicacy.” England was a hold out and didn’t adopted the fork until the 18th century. In North America, the fork didn’t catch on until after the American Revolution. All raw materials from the Colonies were shipped back to Great Britain as it was illegal to produce anything in the Colonies. Then products would be made in England and shipped back to the Colonies for sale. Forks made of lead were a health hazard, while forks made of steel rusted and made food taste funny. That left metals like silver and gold which were far too expensive for anyone but the wealthy. 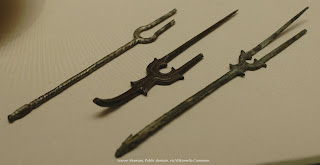 The early forks had two tines, but foods like peas fell through the large gap. Then came along the three-tine fork, and early in the 1800s the four-tine fork was born.

Commercialization of silver-plating in the 1840s made a market of less expensive forks. In 1859, silver was discovered in Nevada and flooded the market, which caused the price of silver to drop and made forks even more accessible to the masses.

With forks being so affordable, the wealthy no longer felt special. Silver companies knew that a fork to the wealthy was more than a useful tool, it was a status symbol, so they started creating a myriad of forks for every kind of food: fish, fruit, bread, dessert, cheese, dinner, crab, olive, oyster, salad, pickle, and the list goes on and on.

Fortunately, the number of forks used today have been dialed back to a handful. Most of us can get along with one or two styles of forks.

Can you name all the different types of forks in the first picture? I don’t even want to try.