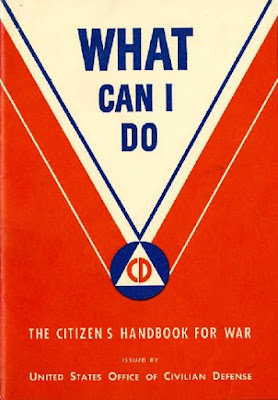 My upcoming novel, Rose Harbor, is set in home front-World War 2, and I’m very grateful that my parents kept a few artifacts from that time period. These include some unused ration stamps and a little booklet published by the U.S. Office of Civil Defense, called “What Can I Do? The Citizen’s Handbook for War.”
After 1941, like almost every able-bodied man, my dad tried to enlist, but because he had a history of kidney stones, he was rejected. This little booklet was written for people like him who couldn’t physically go to war but could still help.
The first part of the booklet focuses on several topics regarding what everybody can do everywhere:
1) Protect Ourselves – Use black-out curtains, know where your warden post is located, etc.
2) Civilian Mobilization – Be ready to contribute in the ways described in the booklet.
3) Conservation – Get along with less and take good care of what you have so it will last.
4) Salvage – Saving things you can’t use and sending them back to the smelter to be remade. 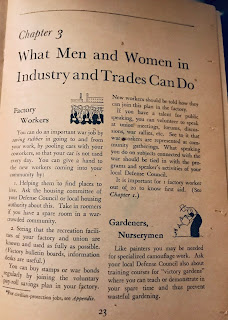 5) War Budget – Save money and invest regularly in war bonds, save to pay your taxes.
6) Health – Take good care of yourself and avoid getting sick as best you can.
7) Information – Understand what’s going on by listening to the news and reading newspapers.
8) V-Homes – A home should be saving, salvaging, conserving, and converting. A V-home award is a badge of honor for families who have made themselves into a fighting unit on the home front.
The other half of the booklet lists various occupations that require certain skills and how people who work in those occupations can be used at the home front to apply these skills to certain volunteer positions. These are broken down into categories such as industry and trades, business, professionals (which involves teachers, clergy, medical, librarians, lawyers, and creatives like musicians, artists, editors, and writers. Another section focuses on farmworkers, and another on what women can do such as converting their home lastly is a short section on what children can do.
The back cover contains an index of occupations and the page numbers that describe what those in certain occupations can do to help in the war effort. 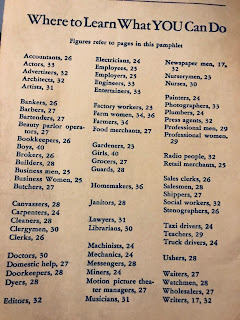 I immediately looked at what writers could do and I would have been directed to the Information segment to write publicity items, war news, instructions for rationing, and education in war aims.
A manager of a movie theater can help by showing documentaries that inform about the war, including the work done in the factories converted to produce ammo, guns, and other weapons. They were also responsible for providing a few hours of relaxation for those who are pulling double-shifts in the factories, etc.
From a novelist’s perspective, this booklet has provided valuable information such as what my characters who were on the home front could do based on their skill sets. I’ve heard over and over again about how the entire country pulled together in whatever way they could to help win the war. That period of time wasn’t called the Greatest Generation for nothing.
What artifacts from another time has your family saved through the years?
#
In the historical fiction series, Newport of the West, Lake Geneva, Wisconsin's rich history is told through a fictional family who, having been displaced by the Great Chicago Fire, moved from Chicago to the beautiful Geneva Lake. Follow the generations of the family through the decades in this 4-book series. The final book, Rose Harbor, releases May 2021. 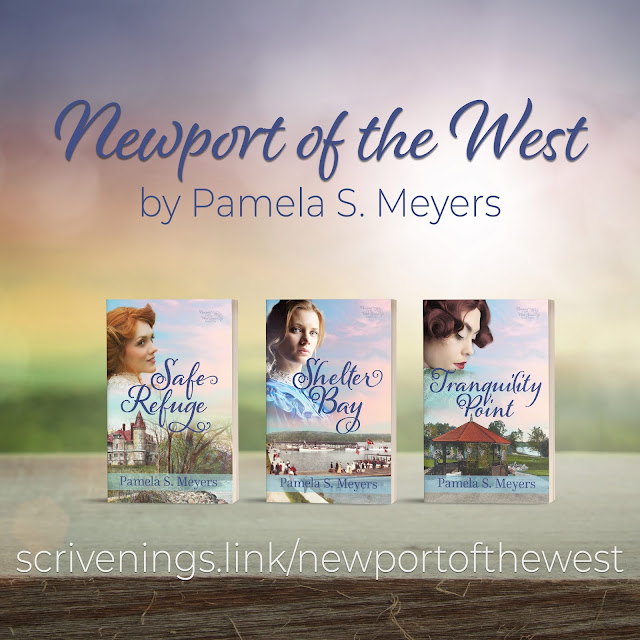 Pamela S. Meyers was raised in Lake Geneva, Wisconsin, the setting for her historical novels.
She is currently working on Rose Harbor, a World War 2 home front novel.
She lives in northeast Illinois with her two rescue cats, is active in her church, and enjoys jaunts north over the state line into her native Wisconsin.
Her books are sold locally in the Lake Geneva area and on Amazon.
Posted by Pamela S. Meyers at 1:30 AM