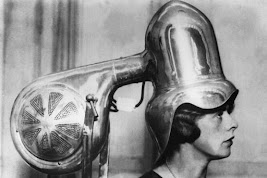 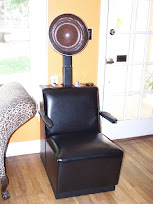 In 1890 first hairdryer was invented by French stylist, Alexander Godefroy.   His invention consisted of a bonnet with a hose attached to the chimney pipe of a gas stove. Can you imagine!  The other picture above is one you may recognize and similar to what is used today in some salons.

Before hair dryers were invented, women and men would use the extra hose that came with vacuums and hook it up to the air coming out of the back of the vacuum to dry their hair.

In 1915 to 1920, hand held dryers were invented by the National Stamping and Electric works which were under the White Cross company. Later Hamilton Beach and some other companies invented the hand held portable hairdryer. They sometimes overheated and caused electrocution, so some work had to be done for improvement. They were also clucky and made of steel and zinc. These hand held dryers were about 100 watts, and today, we have can buy them in 2000 watts available to us. 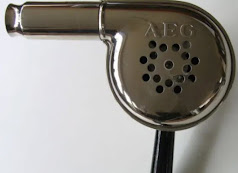 In the 1920's, the hand held hairdryer's mechanism has not had many changes. the focus of companies like Hamilton Beach during the 1920's was to make the hair dryer lighter and to increase the wattage to save time while using it.

In 1951, bonnet dryers similar to the picture on the right above and also portable cases that held the hair dryer with a hose connected to the bonnet you could set up at home to dry your hair. Sunbeam boasted that with their model, you could dry your hair with these in about twenty minutes. Sometimes, I need twenty-two minutes to quick shower and get ready! 😂

We are spoiled today having to dry our hair in much less time with a bonnet home model or hand held dryer. At this time, they also became less bulky and noisy.  We have these available to us today which are lighter to carry, easy to assemble, and safer to use than in 1950. 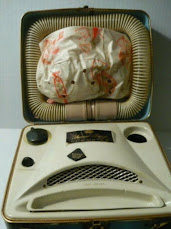 Here's a picture of salon hair dryers in the 1920's. Thank goodness for us, they dry our hair faster, and they've become more comfortable. 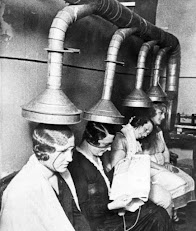 In 1991, the U.S. Consumer Product Safety Commission mandated hair dryers must use a ground fault circuit interrupter so that if it gets wet, it won't electrocute the user. By 2000, the number of deaths by hair dryer electrocution had dropped to around four a year rather than the hundreds of deaths reported before this guideline was put in place where hair dryers fell in a sink or bathtub full of water.
Ninety percent of homes now have hair dryers. Today, we have hair dryers which weigh less than a pound. They are made with tourmaline crystal iconic technology or nanofusion. Tourmaline is a silicate that claims to make hair sleek and shiny. Nano technology claims to kill bacteria and viruses including head lice.

I hope you've enjoyed learning the history behind our hair dryers. I've enjoyed the research!

Maryann married an Englischer, who kept secrets and gambled away their money. When he dies, she returns to Amish life to raise her baby, Betsy. Her mamm is ill and needs her. She falls in love with Andrew, and his uncle becomes sick and asks him to relocate and takeover his store hours away. And she finds out Andrew's secret, and her trust in him is shaken. What does the future hold for them?

Comment and you will be entered for a chance to win a copy of MARYANN'S HOPE. Please put your email in your comment so I can contact you. Thank you for visiting me here today!