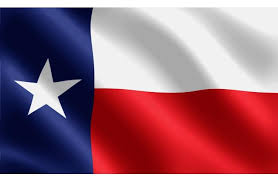 Most people know some of the history of Texas like the battles of the Alamo and San Jacinto and men like Sam Houston, James Bowie, and Davy Crockett, but many have never heard of the Texas Archives War.

After Texas became in Republic in 1836, many decisions had to be made. One of them was choosing where to place the capital city. The Texas Congress liked a location in Central Texas, but Sam Houston, the first president of the Republic blocked the plan in favor of his own namesake city, Houston, on the Gulf Coast.

The location hung in limbo until 1839 when Mirabeau B. Lamar replaced Houston as president and again pushed the Central Texas location for the capital city. They had chosen a site along the Colorado River near the settlement of Waterloo. 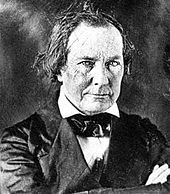 In less than a year, Lamar moved to the new capital now known as Austin. Log buildings had been constructed in the frontier town to house the meetings of Congress. From this point, the archives and records became a highly visible symbol of the conflict that earned the name of The Texas Archives War.

In 1841, Houston again became president and refused to move to the official residence in Austin. Instead, he moved into a boarding house run by Mrs. Angelina Eberly. When the Mexican army invaded Texas in 1842 and took control of San Antonio, Goliad, and Victoria, Houston saw the opportunity to move the capital back to Houston. He called a special session of Congress in Houston and argued that Austin was not safe for the archives. He ordered them to be moved. However, a group of Austin, "Committee of Safety" warned the heads of government in Austin they would meet with resistance if they attempted to remove the documents.

In December of 1842, Houston made the announcement that Austin was no longer the capital and ordered the archives be removed. Two army officers, Colonel Thomas I. Smith and Captain Eli Chandler, with 20 men loaded three wagon with papers before Mrs. Eberly spotted them. She ran onto Congress Avenue, confiscated a cannon, then fired it at the team loading the wagons. 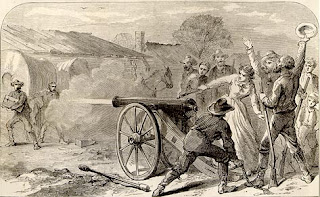 https://www.tsl.texas.gov/treasures/republic/archwar/archwar.html
This alerted the citizens and the men fled with what they had on the wagons and with the vigilantes following. They had to stop overnight at Brushy Creek just north of Austin where they were forced to surrender at gunpoint.

The archives returned to Austin with much celebration by the citizens of Austin on New Year's Eve. Below is a copy of a letter from Sam Houston concerning the archives. 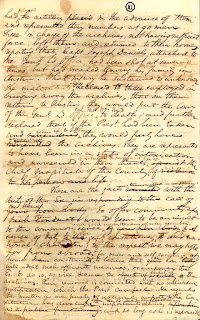 Although the archives were there, the government did not move back until 1845. Even then, the official naming of Austin as the capital city was not completely settled until 1850. At that time, Texans voted by a large majority to make Austin the permanent capital and seat of government for the state. 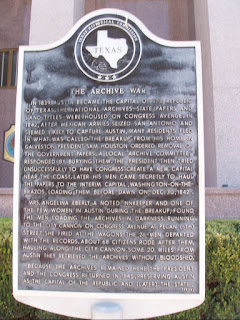 https://www.tsl.texas.gov/treasures/republic/archwar/archwar.html
Above is a picture of the historical marker commemorating the events that took place.
The state government decided Mrs. Eberly had played an important role in the "war" and erected a statue in her honor that stand in downtown Austin. 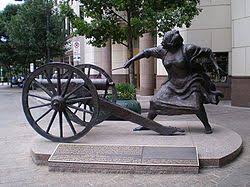 Thank you to the Texas State Library and Archives Commission for the story and pictures of this event.
In your study of history, have you discovered any unusual or not as well known facts about your state?

Martha Rogers is a free-lance writer and multi-published best-selling author from Realms Fiction of Charisma Media and Winged Publications. She was named Writer of the Year at the Texas Christian Writers Conference in 2009. She is a member of
ACFW and writes the weekly Verse of the Week for the ACFW Loop. ACFW awarded her the Volunteer of the Year in 2014. Her first electronic series from Winged Publications, Love in the Bayou City of Texas, debuted in the spring of 2015.  Martha is a frequent speaker for writing workshops and the Texas Christian Writers Conference of which she is a director. She is a retired teacher and lives in Houston with her husband, Rex. Their favorite pastime is spending time with their twelve grandchildren and six great-grandchildren.