A History of Type 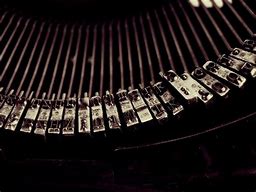 What can one say about typewriters? Plenty since they were invented in the 18th century. Over the years the typewriter evolved, eventually morphing into the computer keyboard we know today.

In 1714, English inventor Henry Mill worked at the New River Water Works Company as Engineer-in-Chief. He patented a machine made for "impressing writing on parchment." Alas, no illustrations or models of this first typewriter exist. For whatever reason, Mill never developed it. Following is the wording of the original patent: 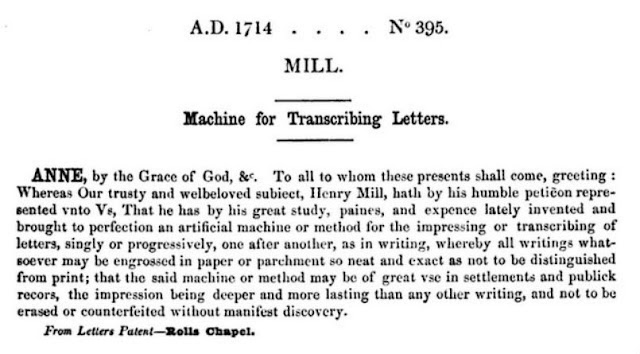 One hundred and fifty years later, in 1865, Danish inventor Rev. Rasmus Malling-Hansen came up with a version of a typewriter that doesn't look like the model which has became popular over the centuries. It's known as the Hansen Writing Ball. Although Malling-Hansen made improvements and won first prize in two world exhibitions, his invention nearly disappeared from annals of history. 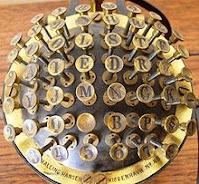 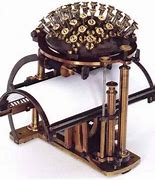 A mere three years later, American Christopher Latham Sholes went on to produce fifty machines but failed to sell them. He took his idea to gun manufacturer Philo Remington and sold the production rights. A year later, the first typewriter was made available by E. Remington & Sons, and another year saw an upgrade featuring both upper and lower case letters. It was named the Remington 2. Sholes was dubbed "The Father of the Typewriter" despite the efforts of those before him. 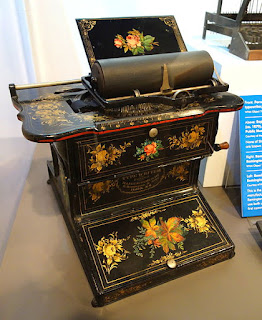 After another decade, John Thomas Underwood, a competitor of Remington's, bought the rights from inventor Franz Xavior Wagner for a more practical "front 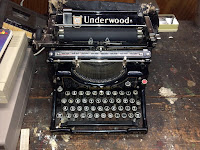 stroke" machine. The US Navy ordered 250 Underwood typewriters, and their popularity soared. By 1915, Underwood employed 7,500 workers and produced 500 typewriters daily.

Sholes had originally intended the machine to print page numbers on books, but it was lawyer and inventor Carlos Glidden who suggested adding letters. At first, the letters were laid out alphabetically, but consumers complained of keys sticking. If you'll recall, the keys were wire rods that struck the paper when pressed. Common letters like "a" and "e" would often tangle and slow down the process. Glidden suggested moving letters around for more proficiency, and thus, the QWERTY keyboard was born, named so for the first six letters on the top row.

Here are some fun facts: 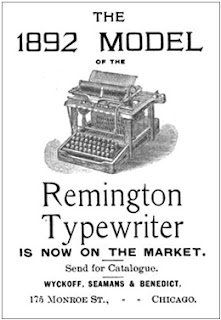 Another fun fact includes an actor popular today, Tom Hanks. A passionate collector of typewriters, Hanks professes to have owned hundreds in his lifetime. He started collecting at age nineteen and is still vocal about the importance of vintage and modern typewriters. So passionate, in fact, he has published a collection of short stories entitled Uncommon Type: Some Stories, centered around the typewriter and its impact on his life. Disclaimer: I read the first story and it's rated...um...shall we say TVMA? Proceed with caution. However, the following two links should be safe. He shares his love of these machines with enthusiasm and humor.

As I type on my computer, I recall the days of tapping away on my first Royal Typewriter when I was a child. I upgraded through the years, moving on to an IBM Selectric with the font ball that reminds me of the Hansen Writing Ball. Then on to a word processor which showed four lines of type before one committed it to paper. Like magic!

Then the computer. First DOS, where I had to put in code when I wanted it to shift, tab, or return. And then, FINALLY, Word was invented. I have joked I couldn't become a writer until Bill Gates created Microsoft. That being said, there's something to typing on a vintage machine. Hearing the clacks of the keys and the ding of the return carriage, the ratcheting of the rubber platen and the stinging paper cut when I yanked the paper out.

In my book, Titanic: Legacy of Betrayal, one of the characters needs to write a memoir, a confession of sorts. She has severe arthritis and doesn't want to dictate her deepest, darkest secrets to another person. Find out how she by-stepped the typewriter and communicated with others a century later.

Titanic: Legacy of Betrayal
A secret. A key. Much was buried on the Titanic, but now it's time for resurrection.