I don't snack on them now, but I loved them as a child!


At the end of 1872, Frederick W. Rueckheim used all of his savings of two-hundred dollars to start his popcorn and candy business. Later, he bought out his partner, William Brinkmeyer, and asked his brother, Louis, to partner with him the popcorn and confectionary business. Popcorn and candy were sold by vendors at circuses, fairs, ballgames, and more. They were making good money, so Frederick thought this would be a good business for him to build. He asked his brother, Louis, to partner with him. Frederick was responsible for the strategic planning and marketing, and Louis was in charge of manufacturing.


In 1893, F.W. Rueckheim and his brother, Louis Rueckheim, sold the molasses covered popcorn and peanuts in clusters. They introduced the candy at Chicago's first World's Fair.


In 1908, Jack Norworth and Albert Von Tilzer wrote this song which we still hear at ball games today. Frederick didn't have any connections to the writers, and it gave him free publicity.


Take me out to the ball game,
Take me out with the crowd.
Buy me some peanuts and cracker jack,
I don’t care if I never get back,
Let me root, root, root for the home team,
If they don’t win it’s a shame.
For it’s one, two, three strikes, you’re out,
At the old ball game…


In 1912, thousands of prizes were put into Cracker Jack. The prizes were first made of paper and metal. The paper prizes were booklets, Indian headdresses, pictures of movie stars, and paper dolls. They also added coupons for toys, jewelry, watches, linen, and sporting goods. The metal prizes were little animals, camera, binoculars, porcelain dolls and more. In 1914 and 1915, baseball cards were added as a prize. 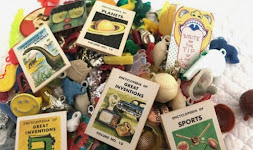 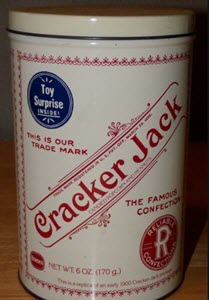 I hope you've enjoyed going back in time with me to when Cracker Jack began!


Did you like Cracker Jack? What prize do you remember getting out of the box?

Sarah Taylor and Susan Fletcher were the winners for my Feb. contest to win a copy of MARYANN'S HOPE!  I'll have more chances for you to win coming soon.

Visit: http://www.mollyjebber.com for more about MARYANN'S HOPE and list of Molly's books.