Nestled between Germany, Luxembourg, the Netherlands, France, and the North Sea, Belgium covers an area of 11,849 square miles and is home to two main linguistic groups: the Dutch-speaking Flemish community which constitutes about sixty percent of the population, and the French-speaking community which constitutes about forty percent of the population. There is a tiny German-speaking community that exists in the East Cantons. Brussels, the country’s largest city and capital is officially bilingual in French and Dutch.
Belgium is comprised of ten provinces, and Bruges is the capital of the province 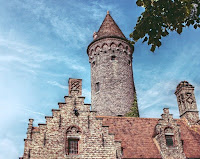 of West Flanders in the Flemish region. The seventh-largest city of the country by population, its fifty-three square miles are actually oval in shape. Bruges originated on the banks of the river Reie. Often referred to as the Venice of the North, the name Bruges is thought to be derived from the Old Dutch word for bridge: brugga. An appropriate moniker considering there are eighty bridges within the city limits.
The history of the city reaches back several hundred years when it received its charter on July 27, 1128. As it developed, canals were built connecting it to the deeper branch of the North Sea, the Zwin. Important because of its tidal inlet known as the “Golden Inlet” and strategic location at the crossroads of the trade routes, Bruges used its wealth to construct new walls and additional canals. Castles too. Of the 470 castles in the Flanders region, nearly fifty are found near Bruges.

By the beginning of the 13th century, the city was on the circuit of the Flemish and French cloth fairs. A short time later, the first merchant fleet from Genoa arrived, linking Bruges to trade in the Mediterranean. As a result of its wealth, Bruges opened the Bourse in 1309. Considered the first stock exchange in the world, the Bourse developed into the most sophisticated money market of the Low Countries in the 14th century.
One hundred years later, Philip the Good (Duke of Burgundy) set up court in Bruges and attracted artists, bankers, and other prominent and influential people from all over Europe. By 1400, Bruges was home to 200,000 residents, and the city’s weavers and spinners were thought to be the best in the world. 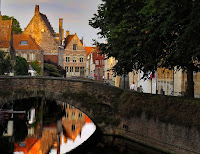 In the 1500s, the “Golden Inlet” began silting up, and prosperity began to wane. The lace industry did well, and Charles II of England lived in the city during his exile in the 1650s, but Bruges continued to fade. Antwerp soon became Belgium’s economic leader. The population declined until the 1900s when Bruges began to attract wealthy British and French tourists.
Occupied but undamaged during both world wars, Bruges experienced a bit of a renaissance in the 1960s. Restoration of residential and commercial structures, monuments, and churches produced a flood of tourism, and the city was designated “European Capital of Culture” in 2002. Eight million tourists visit annually to enjoy the medieval architecture, miles of canals, and cobblestone streets.
What do you find most intriguing about this beautiful city’s history?
_________________

Linda Shenton Matchett writes about ordinary people who did extraordinary things in days gone by. A volunteer docent and archivist for the Wright Museum of WWII, Linda is also a trustee for her local public library. She is a native of Baltimore, Maryland, and was born a stone’s throw from Fort McHenry. Linda has lived in historic places all her life and is now located in central New Hampshire where her favorite activities include exploring historic sites and immersing herself in the imaginary worlds created by other authors.
Rayne’s Redemption:

Will she have to lose her identity to find true love?
Twin sisters Rayne and Jessica Dalton have been swapping places their whole lives, so when Jessica dies on the eve of heading west to become a mail-order bride, Rayne decides to fill her sister’s shoes. The challenge will be faking Jessica’s faith in God. Can Rayne fool her prospective groom without losing her heart...or her soul?
Flynn Ward fled England to escape his parent’s attempts at marrying him off, but locating a woman to love in the Wyoming mountains is harder than finding a hackney in a rainstorm. Then the Westward Home & Hearts Agency offers him the perfect match. But when his prospective bride arrives, she’s nothing like she seemed in her letters. Is he destined to go through life alone?
Can two desperate people overcome their differences to find common ground...and love?
Purchase Link: https://amzn.to/3pGWKJE
Posted by Linda Matchett at 12:30 AM