This is our second jaunt into a canal city, and today we’ll be visiting the Netherlands. Last month we visited Birmingham, England. 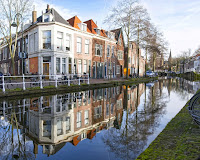 The Netherlands is located in Europe and consists of twelve provinces that border Germany, Belgium, and the North Sea. Literally meaning “lower countries,” most of The Netherlands lies a mere three feet above sea level with twenty-six percent of the country falling below sea level. The name Holland is often erroneously used to refer to the whole country when in actuality Holland only encompasses two of the twelve provinces. Dutch is the official language.
Delft (meaning delve or dig), is a canal-ringed city in the western Netherlands and has a long and intriguing history. The first canal, Old Delft, was dug in 1100 AD in conjunction with the founding of the town and runs primarily through Noordeinde. The canals were originally used to drain the land, and were not used for transport until later. Unlike canals in other cities, Delft’s canals are nearly at street level, making them feel integral to the city.
At the end of the 12th century, the Nieuwe Delft was dug through part of the settlement that runs through Old Delft. Still later fortified singels (water-filled moats used for defense) were created to surround the city. Delft was finally connected to the sea in 1389 when the Delfshavensche Schie canal was dug through the river Maas.
By 1400, Delft had more than 6,500 inhabitants, making it the third-largest city in the country behind Dordrecht and Haarlem. The city continued to grow, and in 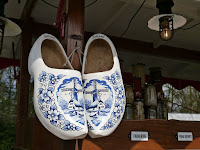 1572, William of Orange took up residence as the leader of growing national Dutch resistance against Spanish occupation. The following year, Spanish forces were repelled in the Battle of Delft. When The Netherlands gained independence nine years later, Delft became the country’s capital. After William's assassination in 1584, he was buried in Nieuwe Kerk (New Church) starting a tradition for the House of Orange that continues to this day.
About this same time, a large number of Italian artisans of earthenware settled into Delft and introduced a new style in which white glaze is applied decorated with metal oxides, particularly cobalt oxide that produces a blue color. The heyday for this pottery lasted from 1640 to 1740, and items were exported all over Europe and into Asia. 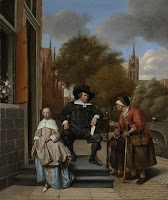 Born in 1632, Johannes Vermeer is probably Delft’s most famous native. Having only moderate success with his work, he produced around fifty paintings during his short lifetime, thirty-four of which survive. Some reports indicate his death left his wife and eleven children in substantial debt. She later asked for a reprieve from her creditors, indicating her husband’s illness and death was brought on by financial stress. His painting fell into obscurity until 1860 when a German museum director saw Vermeer’s The Art of Painting in a Vienna gallery.
Delft’s economy is comprised of education (Delft University of Technology), scientific research (Netherlands Organisation for Applied Scientific Research), industry (Delftware), retail (IKEA), and tourism (more than one million annual visitors).
Does it surprise you to learn The Netherlands is home to a canal city?
_____________________

Linda Shenton Matchett writes about ordinary people who did extraordinary things in days gone by. A volunteer docent and archivist for the Wright Museum of WWII, Linda is also a trustee for her local public library. She is a native of Baltimore, Maryland and was born a stone’s throw from Fort McHenry. Linda has lived in historic places all her life, and is now located in central New Hampshire where her favorite activities include exploring historic sites and immersing herself in the imaginary worlds created by other authors.
About Vanessa's Replacement Valentine:

She’s running toward the future. He can’t let go of the past. Will these two hurting souls experience love in the present?
Engaged to be married as part of a plan to regain the wealth her family lost during the War Between the States, Vanessa Randolph finds her fiancé in the arms of another woman weeks before the wedding. Money holds no allure for her, so rather than allow her parents to set her up with another rich bachelor she decides to become a mail-order bride. Life in Green Bay, Wisconsin seems to hold all the pieces of a fresh start until she discovers her prospective groom was a Union spy and targeted her parents during one of his investigations. Is her heart safe with any man?
Eight years have elapsed since the Civil War ended, and Miles Andersen has almost managed to put the memories of those difficult years behind him. He’s finally ready to settle down, but the women in town are only interested in his money. A mail-order bride seems to be the answer until the woman who arrives brings the past crashing into the present.
Can two wounded hearts find healing in the face of doubt, disappointment, and distrust?
Pre-order link: https://amzn.to/3650JJh
Posted by Linda Matchett at 12:30 AM