Hallmark has always been a favorite of mine. I love their cards and I have no trouble finding just what I need to fit any and every occasion. Most of us have watched their Christmas movies and other seasonal movies as well. A few of our authors have had their novels transcribed into screenplays that have appeared on the channel. Their Gold Crown logo is well known and know it means a quality product.

When I decided to look into their history, I found some very interesting facts. One of them being how two brothers started out with a few cards and built an empire that spans generations of card buyers and movie viewers.

It all began in 1910 with eighteen-year-old J.C. Hall when he stepped off a train in Kansas City, Missouri. He held his only possession, two shoeboxes filled with
picture postcards, under his arm. With very little money, not even enough for a ride to the YMCA, he had an entrepreneurial spirit and determination of a pioneer. 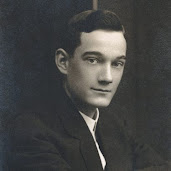 After a year of selling on his own, J.C.'s older brother Rollie Hall joined in the business and named it Hall Brothers. They had success selling to stores around Kansas City, and even expanded to included other towns served by the railroad.

Then tragedy struck on January 11, 1915. A fire destroyed their office and all of their inventory. The only thing saved was the safe filled with invoices. With that, and a $17,000 debt, they set up shop again and pressed onward.

Post card sales had declined before the fire, and J.C. recognized the need for more personal and private means of communication. This resulted in high-quality Christmas cards and Valentine cards mailed in envelopes. The fire served as a catalyst to take a risk and buy a printing press. This venture transformed Hall Brothers from a dealer to a manufacturer. 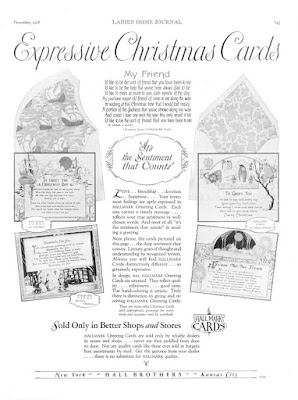 Example of an early Christmas Card

This led to a need for writers and illustrators for the cards. Since neither of the Hall brothers considered them writers or artists, they turned to their employees. J.C. quickly developed a good eye for quality and an ear for saleable verse and prose. There were very few full-time artists, and no staff writers, in those early 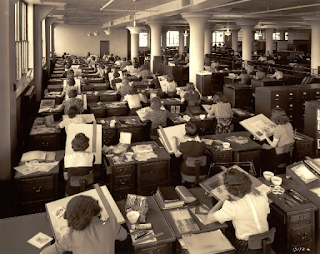 days, so J.C. was open to all sources and if an employee showed a fair for composing sentiment they were encouraged to contribute, no matter their position. Those employees are hard at work in the picture above. 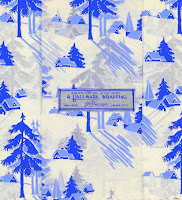 Their first foray into other product lines came in 1917 when they “invented” modern gift wrap. During the peak Christmas season, their retail store, eventually known as Halls, on the fashionable Petticoat Lane ran out of solid-colored gift dressing, and, with no time to reorder, Rollie improvised by selling decorative French envelope liners. The elaborate designs – featuring bright florals, geometric shapes, and Christmas motifs - sold out so quickly that the brothers decided to begin printing their own gift wrap. Consumers could now purchase coordinating greeting cards, gift wrap, and trim. This would lead to even more products in the years ahead.

J.C.'s creativity and imagination led to several new products as well as innovations in marketing and connecting with consumers. Some of those included cellophane wrapped cards for servicemen in 1917, friendship cards in 1919, flat, laminated cards and framed mottos in 1924, and sound cards or "Greetaphones", in 1924. Even when some of the innovations were flops, J.C. continued to encourage employees to come up with new ideas. He then concentrated on new ways to market the company and its products.

J.C. believed their name, Hall Brothers, sounded old fashioned. One name had been on his mind since the early 1920's. The word "hallmark" intrigued him as it was used by goldsmiths as a mark of quality. He liked it because it incorporated the family name and said quality in an authoritative way. In 1928 the company began marking its brand in earnest and used the Hallmark name on the back of every card. They also began to advertise nationally, and they were the first company of its kind to have an ad in a magazine, Ladies Home Journal. Then he turned to radio sponsorship. 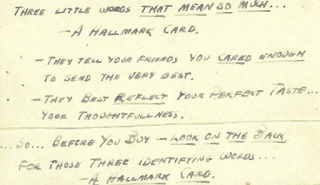 Ed Goodman - who was head of adverting and sales and worked on the revolutionary Eye-Vision fixture - began brainstorming and tinkering with past slogans on the 3 x 5 cards that were so ubiquitous at Hallmark. After seeing Ed idly play with the cards, J.C. picked them up and one line jumped out – “you cared enough to send the very best.” The company began using the slogan immediately, and sponsored radio programs included it within their Hallmark ads in 1944. 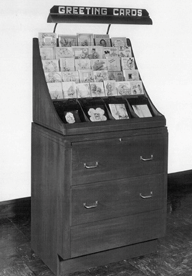 Merchandising had become a problem because most stores had no organized way to display and sell greeting cards. Cards in most stores were displayed wherever space allowed or were simply kept out of consumers’ sight and reach in cardboard shipping boxes and in drawers behind the cash register. J.C.’s solution was to develop a fixture specifically for displaying greeting cards at eye level. The design, known as the Eye-Vision, was patented in 1935 and transformed the consumer’s card-purchasing experience.

Just a few years later, in 1951, J.C. saw what he thought was a rare opportunity. He learned from his advertising partner, Fairfax Cone, that NBC was looking for a sponsor for an original opera written for television. Although the planned Christmas Eve airdate of Amahl and the Night Visitors would be too late to help as a holiday promotion, J.C. decided to sponsor it to thank all the people who bought Hallmark cards. It was Hallmark’s first sponsored television special and the first of hundreds of movies that would be presented under the name Hallmark Hall of Fame (It also helped pave the way for original programming on Hallmark’s television channels).

Today, millions watch movies on Hallmark's television channels. They sponsor clean. wholesome romance, dramas, and mysteries. Their Christmas ornaments become wonderful family keepsakes, and my grandchildren have been recipients of many of those ornaments. Individual Hallmark stores sell the greeting cards along with gifts, wrapping papers, ornaments, and other items for the home.

Below is a picture of their corporate headquarters. 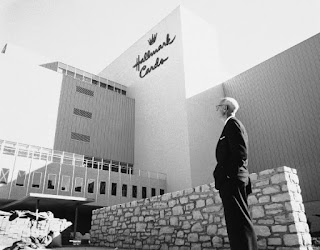 With only a box full of post-cards, J.C. and Rollie built their company into one that is respected and known by millions. When one sees the Crown Logo on the back of a card, they know  "You Cared Enough to Send the Very Best." 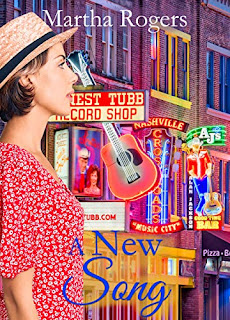 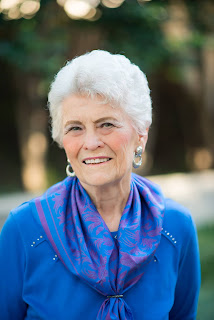