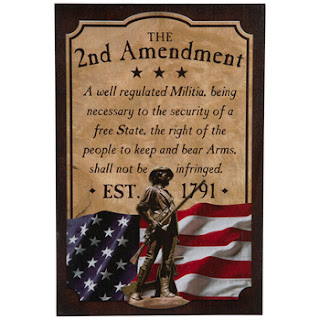 I’ve never owned a gun in my life, nor ever shot one—except for a toy. But I am a firm believer in the Second Amendment which states: A well-regulated Militia, being necessary to the security of a free State, the right of the people to keep and bear arms, shall not be infringed. So what was the necessity of being allowed to keep weapons? As believers in God and in the sin nature of man as taught in Scripture, the early Americans understood the need for self-protection. They had only recently been under attack from the soldiers of England’s King. When might the next round of attacks come from an enemy either domestic or foreign? In the same vein, what if an intruder threatened the life and well-being of one’s family? Does not an American, or any person, have the right to self-protection? These are, sadly, very real scenarios that many have had to deal with. In recent years and with the development of sophisticated rifles, the question of types of guns has come to the fore. Which ones should be allowed and which should be banned in order to prevent mass shootings?

These are certainly questions to be discussed and decisions need to be made.

But to ban all weapons is in direct opposition to the spirit of the United States Constitution.

The conflict seems to partly rest in the humanistic belief that man is basically good. For those who believe in good vs. evil, the answer is more basic: Good will triumph when evil is restrained.

Elaine Cooper’s most recent novel, Scarred Vessels, is a finalist in the 2021 Selah Awards Contest. Her novel, Love’s Kindling is the second-place winner in Historical Romance for the 2020 Selah Awards. Like many of Cooper’s books, they focus on the era of the American Revolution. She has authored several historical novels, a non-fiction memoir, and has been published in numerous anthologies and magazines. Although not a current resident of New England, Cooper’s heart for history was birthed there and continues to thrive.

Posted by Elaine Marie Cooper at 3:30 AM