Ask almost anyone where sugar comes from and they’ll probably tell you the sugar cane. Obviously, they are not wrong. In fact, it wasn’t until the 19th century that alternate sources of sugar began to make themselves known.

One of these was the humble sugar beet. If you’ve ever worked a physically taxing job, multiply that effort by fifty and you’ll begin to grasp the difficulty of getting a sugar beet from seedling to processing plant. 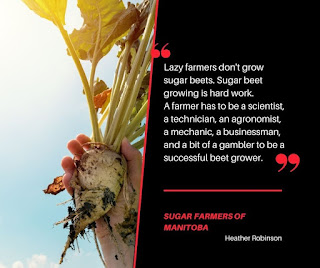 If you were child of a migrant worker during the first half of the 20th century, you might be all too familiar with the whole process as you were forced to work alongside the adults in your family. Though it got you out of school by the end of April, you’d be only too happy to return in October after harvest. Long days in a hot field, bending over the entire time whether planting, thinning, weeding, or harvesting, would make a day at school feel like a piece of cake.

Cake for which the world needed its sugar.

Once planting by hand was complete, it would be time to manually thin the plants. Each seed was “multi-germ,” like a tiny pod containing five or six separate beet plants. Workers, on hands and knees, had to carefully pull out all but one tiny seedling without damaging the one left to grow. Monogerm seeds were not developed for use until 1967 and were, understandably, the biggest breakthrough for this challenging industry.

Harvesting was no easier. Many a finger was lost to the sinister-looking sugar beet knife, which came to North America with German and Russian immigrants.


During World War II when cane sugar was not easily imported and sugar rationing went into effect, the sugar beet industry thrived despite the intensive labor required. Among the laborers were many Japanese-Americans and Japanese-Canadians, relocated from their homes along the west coast to farms on the prairies to fill the gap left by young men who were off fighting the war. Where I live in Manitoba, farmers from across the southern half of the province carted their sugar beets to train stations where they were transported to the Manitoba Sugar refinery in Winnipeg. The industry would not have survived without the help of the interned Japanese.

Though sugar beet farming eventually grew easier with the advancement of machinery, seeds, and irrigation systems, demand has greatly diminished as more economic and efficient sources of sugar have taken over.

Bitter war might be raging overseas, but Rose Onishi is on track to fulfill her lifelong goal of becoming a dazzling concert pianist. When forced by her own government to leave her beloved home to work on a sugar beet farm, Rose’s dream fades to match the black soil working its way into her calloused hands.

Terrie Todd’s characters are subjected to the grueling process of sugar beet farming in the 1940s between the pages of her upcoming novel, Rose Among Thornes, releasing from Iron Stream Media this August. She’s also the award-winning author of The Silver Suitcase, Maggie’s War and Bleak Landing. Terrie is represented by Mary DeMuth of Books & Such Literary Agency. She lives with her husband, Jon, in Portage la Prairie, Manitoba, Canada where they raised their three children and where her novels are set. They are grandparents to five boys.