Historical fiction writers try to create an authentic experience in establishing a diverse array of setting details. Accuracy in wardrobe, current events, period trends, hairstyles, architecture… all of these are important. What could be more compelling than hearing the way people spoke, especially in the authentic slang of the age? 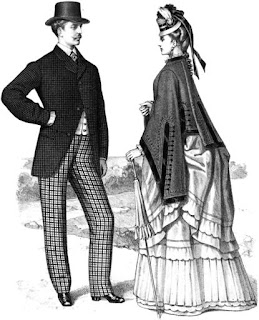 Here is a list of random and expressive words and phrases from the 1800’s.

A Gossip or talkative woman was called a “church bell”

“foreman of the jury”—one who monopolizes a conversation,

Muffin wallopers is a similar term for women who meet over tea to gossip and discuss scandals, thus tea would be called “chatter broth” or “prattle broth” or even “scandal broth”

To fight:  to “shake a flannin”,or “fit” (short for fought) or “row someone up Salt River”

Similarly, “chalk” meant to strike one’s face, and a sockdologer was a powerful punch or blow

“I snore”, “I swan”, or “I Swow”: socially acceptable alternatives to the expression "I swear," which was considered impolite

When a woman turns down a man’s proposal, she is said to “give him the mitten”

Questionable food: “bow wow mutton”, or “bags o’mystery”, may cause one to “cast up one’s accounts”

To be given “the dog’s portion” meant given little to eat, likewise a little of something was “a lick and a smell”

And The Cold Cook was no cook at all, but the undertaker

The Eternity box-was your coffin , for when you’re “under hatches” or “cold as a wagon tire”

A “Spoil pudding” was a preacher who went on too long, presumably delaying a “Sabbaday”, or “Sabberday” meal

To take a “smile” was to take a drink

To absquatulate—to run off in a hurry, to “pull foot,” skedaddle, vamoose.

Perhaps some of these words and phrases sound familiar to you. Or maybe there are others you could add. What is a word or expression that you have found amusing or original, maybe passed down in your family?

CONTEST: Please share below for a chance to win a Kindle copy of my new release, No Man’s Daughter, set in 1866 Shenandoah Valley. 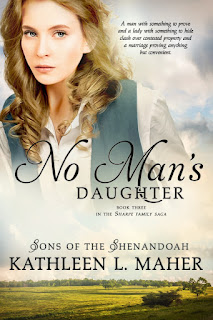 A man with something to prove and a lady with something to hide clash over hotly contested property and an arranged marriage proving anything but convenient. Will her claim on the land prove harder to drive out than her claim on his heart?Benjamin Sharpe sets out after the war to acquire the neighboring farm and finds a beautiful and stubborn squatter has taken residence. A half-wild orphan girl, Willa gives him a piece of her mind with a piece of lead aimed at his boots. Bossed around his entire life by his brothers, Ben isn’t about to take it from any girl. But will his ambitions go so far as to force a waif from her home? As Willa’s resourceful defense of the property frustrates his plans, admiration plucks at his heartstrings. Ben must find a compromise while saving face with his family. But the chit has no intention of playing nice or seeking truce. In Bridgewater, Virginia, the war is still on! 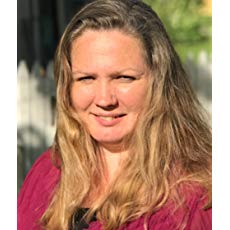 “Stories where every underdog has his day."Kathleen L. Maher's first crush was Peter Rabbit, and she's loved conflicted heroes ever since. She has two novellas in BARBOUR BOOKS' collections: Victorian Christmas Brides and Lessons on Love. Winner ACFW Genesis Award. Author of Sons of the Shenandoah Series: The Abolitionist's Daughter, The Chaplain's Daughter, and No Man’s Daughter. “The Meddlesome Maverick” will release in the Scrivenings Press’s collection Cowboy Cousins in Spring 2022. Kathleen and her husband live in an old farmhouse in upstate New York with their children and a small zoo.
Posted by Debbie Lynne Costello at 1:30 AM