Velvalee Dickinson, a respected member of the national doll-collecting community in the early 1940s, had a secret. A skilled marketer, she carried on a regular correspondence with many of her clients throughout the United States, created brochures detailing the dolls she had for sale, and wrote articles for hobbyist magazines.

She also wrote letters to her contact in Argentina—a woman who probably didn’t exist—using a jargon code that provided information about U.S. ships damaged at Pearl Harbor to the Japanese. As I mentioned last month in my post titled The Doll Woman ~ A World War II Traitor, Velvalee forged the signatures of a few of her clients and even used their return addresses on the letters. Between February and August of 1942, the FBI received five of these letters.

The Bureau’s efforts to break the jargon code and their search for the traitor who’d written the letters had begun.

As a reminder, here’s a quick summary of the five letters.

In February 1942, wartime censors gave the FBI a suspicious letter supposedly written by Maud Bowman of Spokane. The letter, dated January 27, 1942, had a Seattle postmark.

· That same month, Mary Wallace of Springfield, Ohio, received an envelope with her address marked Return to Sender. Her signature had been forged on the letter. She gave the letter to her local post office director who forwarded it to the FBI.

A top priority was to decode the letters. Unlike a substitution code, where a number or letter is substituted for the correct number or letter, a jargon code hides a message within a message. To the casual reader, these five letters had a gossipy tone and were about different kinds of dolls. But their hidden meanings provided important information to our enemy.

For example, the Wallace letter included these lines, transcribed here as originally written:

You wrote me that you had sent a letter to Mr. Shaw, well I want to see MR. SHAW he distroyed YOUR letter, you know he has been Ill. His car was damaged but is being repaired now. I saw a few of his family about. They all say Mr. Shaw will be back to work soon.

FBI codebreakers determined that the misspelling of the word destroyed followed by the capitalized YOUR were meant to bring attention to these two words: Destroyed + Your = Destroyer.

The USS Shaw, a Mahon-class destroyer commissioned in 1936, was in dry dock at Pearl Harbor on December 7, 1941. Three bombs hit the ship during the Japanese attack. Most of the crew were ashore, but twenty-four crewmen died. 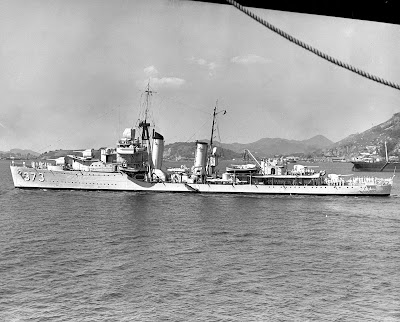 According to an article on a website called Gangster, Inc.:

“Temporary repairs were made at Pearl Harbor during December 1941 and January 1942. Then, on February 9, Shaw steamed towards San Francisco, about two weeks before the Springfield letter was sent, where repairs were completed, including the installation of a new bow” [bolded emphasis added].

FBI agents interviewed the women who supposedly wrote the letters. That’s when they learned the letters had been forged. The common element was that each of the women collected dolls and corresponded with the owner of a doll shop on Madison Avenue in New York City.

Even though the FBI now suspected Velvalee Dickinson as the letter-writer, they spent more than a year gathering evidence. Their investigation led the agents to the founders of the Humpty Dumpty Doll Hospital in Redondo Beach, California. Velvalee had often sent them postcards during a trip she had taken along the West Coast.

This itinerary helped the agents retrace Velvalee’s journey. They found the typewriters that Velvalee had used to write four of the letters at the hotels where she had stayed. They later determined that the Springfield letter was typed on Velvalee’s personal typewriter, a portable Underwood #621465.

In January 1944, the FBI arrested Velvalee, the “War’s Number One Woman Spy,” while she was taking money out of her safety deposit box in a midtown Manhattan bank.

Special Agent E. E. Conroy is quoted as saying that Velvalee “fought bitterly, kicking, clawing, and screaming in an attempt to escape.” He also said that Velvalee had “sent many coded messages to South America containing military and naval information vital to our security and valuable to our enemies” (The Doll Woman by Barbara Casey, p. 79-80). 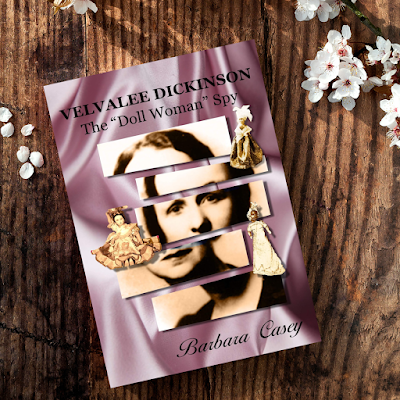 Though Velvalee was charged with espionage and faced the death penalty, she eventually pleaded guilty to censorship violations. She served seven years and changed her name to Catherine Dickinson.

Eunice Kennedy Shriver, a sister of John, Robert, and Ted Kennedy, had taken an interest in Velvalee during her imprisonment and helped her get a job at St. Vincent’s Hospital in New York City. She later worked for Mrs. Shriver as a secretary. Velvalee died in California in 1980.

Velvalee’s traitorous letters and the FBI’s investigation inspired the plot of my newest novel, The Cryptographer’s Dilemma, the first in Barbour’s Heroines of WWII Series. The book releases in August. 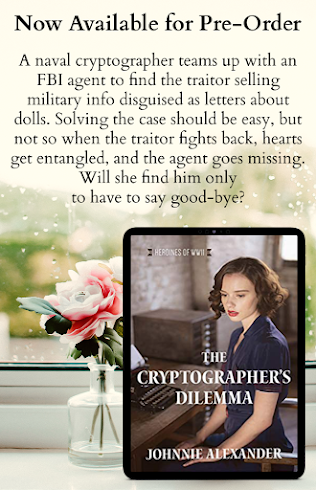 Photo Credits: The image of the letter is from the FBI Archives. Other photos are in the public domain.