THE KEYS TO THE CASTLE 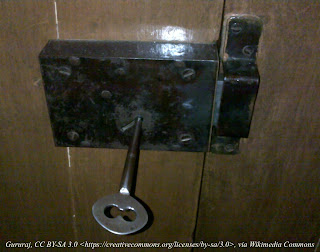 “I’ve got the key to my castle in the air, but whether I can unlock the door remains to be seen.” —Jo in Little Women By Louisa May Alcott 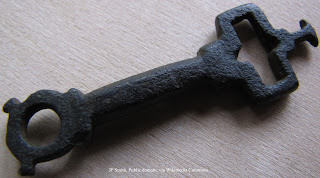 What is the greatest luxury of a home?
Fine China?
Silk sheets?
A fabulous shoe collection?

The thing of most value of any house is the lock on the front door and the key to it. A lock and key provide security for all we hold dear within—including people and pets. 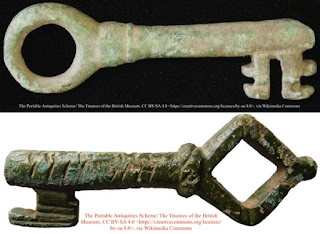 Early “locks” consisted of a board across the door set into brackets. Effective if one is on the inside. What about when a person left their home? How could one keep their belongings safe?
Locks with keys. 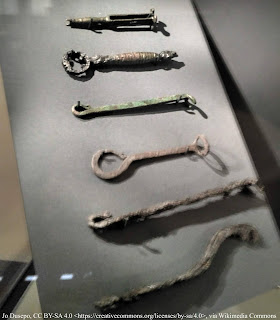 Isaiah 22:22 “And the key of the house of David will lay on his shoulder.” This sounds figurative but was likely literal. To say the first keys were large and cumbersome is an understatement. The colossal marble and bronze doors of ancient Egyptian and Greek buildings could have keys as large as three feet. These heavy mammoths were similar in size and shape to a sickle. They were so weighty they needed to be carried over the shoulder. If the size wasn’t enough, they were decorated with gold and silver and embellished with ivory handles. The man of the house was the only one entitled to the “power of the keys.” I say if he wants to carry that behemoth, let him. 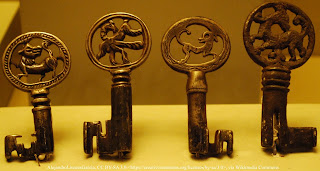 I guess I never imagined keys as anything bigger than palm-ish sized or at most the length of my forearm. I wonder if they had notches similar to modern keys so that not just any sickle-sized key could open every door.

The Romans improved upon the key in both scale and design by crafting them from metal. The door locks were simple lever designs. Inside the house, valuables were secured in lockboxes. The keys to those boxes were worn on a ring as a status symbol. If a person had a lot of keys, that meant they had a lot of valuables that needed to be locked up. 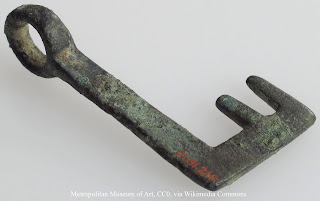 Men held the power by controlling the keys. By law, a man could take his wife’s life—without due process—for adultery, claiming another man’s child as her husband’s, habitual drunkenness, or having a duplicate key. Apparently, it was grave business to protect one’s wealth.

During medieval times, people tried to thwart potential thieves by designing false keyholes or concealing real ones with elaborate ornamentation and details, making them nearly impossible to find unless you knew where to look. 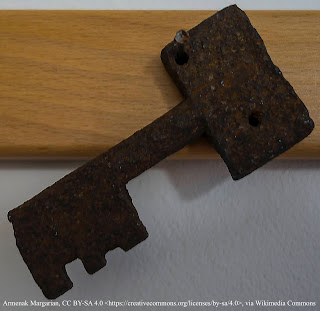 If the keyhole trick wasn’t to your liking, you could go with option B: require multiple keys to open a door or chest. In 1496, to guard the virtue of Queen Isabelle of France’s ladies-in-waiting, five keys were required to open their chamber from the outside. Around this same time, a common practice was for chests to have two dozen locks evenly space around the lid. 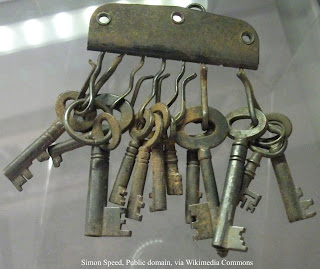 During the Middle Ages and Renaissance, the rules about who could be the bearer of the keys was loosened up to include the wife. Married women often wore extravagant key rings on their clothes as much for necessity and accessibility as for social status and showing her right to spend family funds.

But no key has ever been as grand as the one King Louis XVI presented to his young bride of nineteen Marie-Antoinette. The key to the Palace of Versailles had 531 diamonds inlaid in it. 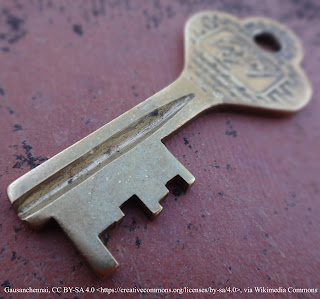 Creative locksmiths made “detector locks” which could keep count of the number of times they were unlocked. Poking your nose where it didn’t belong could also be dangerous. A lock in a French catalog advertised it could grab the wrist of anyone who used the wrong combination and fire a pistol. Sounds like something out of a treasure hunt movie. 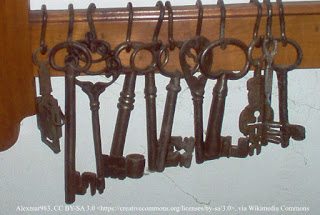 Much of this information came from an awesome book titled The Elements of a Home: Curious Histories Behind Everyday Household Objects, from Pillows to Forks by Amy Azzarito

Will Geneviève open her heart to a love she never imagined?

MARY DAVIS is a bestselling, award-winning novelist of over two dozen titles in both historical and contemporary themes. Her latest release is THE DAMSEL’S INTENT (The Quilting Circle Book 3, Salah Award Winner). The Quilting Circle Book 4, THE DÉBUTANTE'S SECRET, will release August of 2021. Some of her other recent titles include; "Holly and Ivy" in A Bouquet of Brides Collection, Courting Her Amish Heart, The Widow’s Plight, Courting Her Secret Heart , “Zola’s Cross-Country Adventure” in The MISSAdventure Brides Collection , and Courting Her Prodigal Heart . 2019 titles include The Daughter's Predicament and "Bygones" in Thimbles and Threads. She is a member of ACFW and active in critique groups.
Mary lives in the Pacific Northwest with her husband of over thirty-six years and one cat. She has three adult children and three incredibly adorable grandchildren. Find her online at: