I Hear that Train A-Comin'

I’ve been told the town where I live, Portage la Prairie, Manitoba, is the only place in Canada where our country’s two major railroads' mainlines cross at grade level.

The old CPR and CNR stations are a stone’s throw from one another. Before they cross and part ways at the west end of town, the two tracks run parallel to one another, creating a definite division through town. I live on the north side, while most everywhere I need to go is on the south. So whether we’re on foot or in our vehicle, these tracks and their trains and whistles play a daily role in our lives.

Did you know that the earliest trains were pulled by horses? Mining railways began in England in the early 17th century. Tracks were laid much like today’s, but horses pulled the cars full of ore, coal, or quarried stone. With the evolution of steam engines, trains became both stronger and faster in the 1800s. 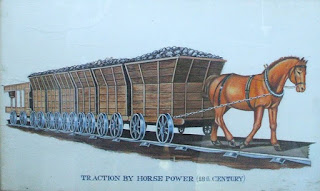 In a country as vast and as unpopulated (particularly in the middle) as Canada, connecting the east and west by rail was an expensive and risky venture. The CPR (Canadian Pacific Railway) took that risk, beginning an intense campaign to lure immigrants by offering packages that included passage on a CP ship, followed by a seven-day journey to the west by train and the promise of land for as little as $2.50 an acre. The Colonist cars they rode in had sleeping facilities and a small kitchen at one end of the car. Children were not allowed off the train lest they wander off and be left behind.

Over 15,000 temporary Chinese laborers, working under extremely dangerous conditions for low wages, completed the CP railroad through the Rocky Mountains, joining east coast to west in 1885. The owners of the CPR knew that not only were they creating a nation, but also a source of economy for their company.

One highlight of the 1930s, both for the railways and for Canada, was the visit of King George VI and Queen Elizabeth to Canada in 1939, the first time that a reigning monarch visited the country. The CPR and the CNR shared the honors of pulling the royal train across the country.

Later that year, World War II began. The CPR devoted much of its resources to the war effort, transporting troops and resources across the country. Twelve of the twenty-two CPR ships that went to war were eventually sunk.

Sometimes I think I was born into the wrong generation as I write the characters of my grandmother’s day, when an exciting adventure could be experienced by buying a train ticket for the city 120 miles away. As late as the 1960’s, residents of my hometown routinely caught the train to Delta Beach 16 miles north of town for a day of fun on the sand and water, catching the train home again at the end of the day. With most households owning one or more cars today, it’s hard to imagine. Those tracks have long since been pulled out. While trains are still widely used for freight like lumber, grain, and vehicles, passenger train travel is limited. Don’t use it if you’re on a tight schedule.

In 1942, telegrams bring life-altering news in a war-hardened world—and the one Maggie receives is no different. But running a restaurant with the help of only pregnant teenagers has made her tough. Exiled by her wealthy parents and working in the restaurant, fanciful Charlotte runs away with romantic notions of a reunion with her baby’s father. When Maggie recruits the help of her old friend, Reuben, they embark on a cross-country search. Maggie stubbornly clings to her independent ways until dealt another devastating loss that forces her to recognize that war heroes can be discovered in unlikely places.

An unmarried, pregnant teenager escapes her guardian by train only to go into labor while still aboard in Terrie Todd’s novel, Maggie’s War. She’s also the author of the award-winning The Silver Suitcase and Bleak Landing. Her fourth novel, Rose Among Thornes, releases this summer and The Last Piece in November. Terrie is represented by Mary DeMuth of Books & Such Literary Agency. She lives with her husband, Jon, in Portage la Prairie, Manitoba, Canada where they raised their three children. They are grandparents to five boys.