Are you an Exonumist? Wait...What? 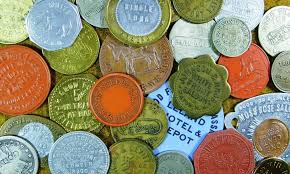 Have you ever heard the word exonumia? Yeah, it was a new one to me too, although it’s been an interesting hobby of my husband’s for quite awhile. It’s also a great topic for history buffs.

Exonumia originates from the combination of the Greek “exo” meaning “out of”, and the Latin “nummus” or “coin”, and refers to collectible thingies like scrip, tokens, and medals. Exonumia also includes most coin-like objects not issued by the government such as military coins, badges, key tags, wooden nickels, arcade tokens, play money and casino tokens. Collectors of these items are called exonumists (try that on your token collecting friends.) 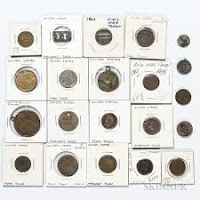 Some exonumia items (like trade tokens) were used as currency in the United States when actual money was not easily available in the economy. Tokens were used both to advertise and to facilitate commerce, and tokens are the form of exonumia we’ll look at here.

Trade tokens have been used as far back as Roman times, and in the United States, as recently as in the era of mining towns. These unique pieces are rare and highly collectible. Trade tokens, sometimes referred to as “minor coinage,” are defined as coins lacking the intrinsic value of gold and silver, with a stated value of $1 or less. In the United States, tokens were used during the Colonial era, the 1830s “Hard Times” era and during the Civil War.

The influx of prospectors to California and the West in the 1850s brought about increased demand for gold, silver and minor coinage. Company stores and independent businesses often used trade tokens as a medium of exchange in Western mining towns and camps. The tokens were used the most between 1870 and 1930 with the expansion of stores that extended credit to their customers. This unofficial money was also issued by mining companies as payment to their employees with the expectation that it would be used to buy things at company stores. 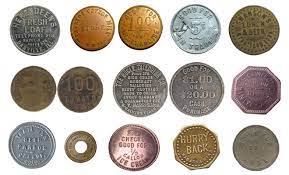 Trade tokens were manufactured using base metals such as brass, copper, nickel and aluminum. Company stores and businesses ordered them from several different die-sinking firms, including the Los Angeles Rubber Stamp Co., Patrick & Co., L.H. Moise founded in 1893 and C.A. Klinker & Co. based in San Francisco. These companies often included their maker’s mark at the lower base on the obverse — or face — of the token while others left no mark. Many tokens are identifiable by their raised letters and numbers, while others are identified with incuse (sunken) lettering. Tokens were manufactured in a variety of shapes, including octagonal, scalloped and triangular, but in most cases, circular.

Trade tokens were commonly given out by stores in accordance with purchases made, then accepted as currency on the customers next purchase. It not only encouraged spending but also loyalty to that particular store. Furthermore, when a store took trade tokens in payment, they could then reuse them for the next customer without having to have additional coins “reminted,” and if never redeemed, a simple means of financial gain.

Exonumists are attentive to not only the history behind the items but their shapes and what types of items they are. Serious collectors can access token catalogs organized by location, time period, and/or type of item. To collectors of such items the trade tokens of a particular store, location or time period are worth far more than the dollar, quarter, dime, nickel or pennies they represented during their original uses. One can find trade tokens in some of the same places that deal with rare coins, currency, at flea markets, antique stores, on Ebay, perhaps even in Grandma’s attic. Take a look around and see what you can find. You know that old saying about one person’s trash….. You might just find a stash of old trade tokens someone would consider a treasure!

Rand Stafford isn't looking for love. He'd ridden that trail ending with a shattered heart. What he needs is help caring for his orphan nieces. Desperate, he places an advertisement for a wife. Fleeing her employer who would use her in his crimes, the ad sounds like the perfect refuge to Carly Blair. Escaping the city, the intrigue, and the danger to hide on a Kansas cattle ranch is worth a shot. Its sanctuary comes with a price—a husband. But it's better than being caught by the law. Or is it?
Posted by Cindy Regnier at 1:30 AM