With This Symbol, I Thee Wed 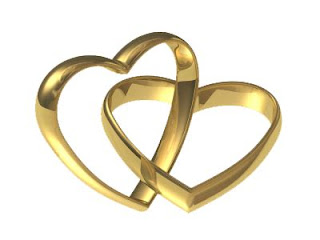 Let's go way back into history. The date was July 12, 1975. An epic day, at least in my life, when I wed the cute boy from church. Okay, 46 years may not be way back there, but it does give me the opportunity to highlight the time honored tradition of marriage.

This tiny piece of metal, (or leather, or twine, or thimble...more on that later,) really packs a punch in the symbolism trade. Let's take a stroll—to the tune of the Wedding March—through the years to explore this trinket of love.

We'd have to travel back some 3000 years to Egypt to find the first wedding ring. Several symbols were attributed to it because, well, ancient Egyptians loved to attach meaning to inanimate objects. The design of the ring meant no beginning and no end. A pledged love throughout eternity. The circle reminded them of the sun and moon, which they worshipped. Today, we could say the sun and moon represent our heavenly Father and His Son. The empty space within the circle was said to be a pathway to the unknown as the happy couple stepped into the future together, naïve and probably a little frightened. They wore this symbol on the fourth finger of the left hand, just as we do today, with the belief that the vein in that finger is directly connected to the heart. We know now this isn't correct, but the sentiment is lovely and worthy of continuing today.

The tradition continued into Greece and later into Rome. The material varied, with copper and iron most prevalent. In some cases, a key motif was worked into the metal to symbolize that the wife was now in control of the household goods. By the 2nd century CE, gold had become the preferred metal.

On into Medieval times, the gems themselves carried significance. Sapphires symbolized the heavens, rubies were for passion, and diamonds reminded one of steadfast strength. Of course, diamonds did hold steadfast, especially thanks to marketing in the 1950's where we were told diamonds are a girl's best friend.

Amongst all this talk about gold and shiny gems, the Puritans went the practical route. A thimble was given as a pledge of love. The new bride accepted it in the sweet way that Wendy presented the kiss—or thimble— to Peter Pan. The puritan bride then went on to sew items for the couple's new home. Once that was done, her groom would often cut off the top of the thimble for her ring. Now, I'm as pragmatic as the next gal, but give me a sparkling bauble and I'm good.

The Hebrew nation eventually adopted the ring from the countries in which they lived. However, they kept them free of jewels or intricate embellishment. Rather, the idea of a simple gold band held monetary value, as could a coin, property deed, or any other token of worth. The groom was not buying his bride as his property, but more precisely buying her intimacy, sealing the contract that she agrees to be with him and him alone. Traditionally, the ring had no gems, as the ring itself was to be presented as the true worth. Once precious stones were finally allowed, they needed to be of the finest quality, and not imitation. For the union itself should be pure as the purest gold, free of distractions, and simple in its faith between two people and their God. 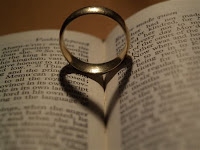 Symbolism is an excellent way to ground one's belief. Yes, we've exchanged rings, but what does that mean? They are a reminder that our marriage is to be steadfast and true, free from distractions, and intimate in its very nature. 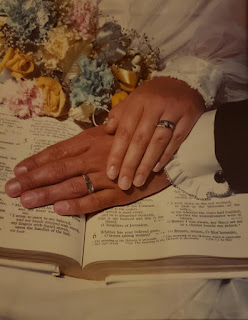