I have a collection of antique catalogs with all kinds of interesting historical items pictured in them. Last month we took a glimpse at the 1908 Sears, Roebuck & Co. catalog. Today, we'll take a peek at the 1894 Montgomery Ward catalog. On August 18, 1872, Aaron Montgomery Ward started what would become a 113-year business with the first mail-order catalog on a single sheet of paper. The catalog grew rapidly to a 152 pages, advertising merchandise with over 3,000 items. By 1897, the catalog was 1000 pages with annual sales over $7 million. The company continued to grow rapidly until 1985 when Montgomery Ward ended the printing of their famous catalog. It was the end of a piece of American history.

A stomacher was a decorative item worn over bodices that fastened down the front of a gown. It was a stiffened triangular insert worn point down and fastened to the bodice at either side by points, pins, or ribbon ties. Functionally, the stomacher filled in the gap between the two front edges of the bodice and continued the corseting effect. Visually, the highly decorated insert took the eye from the top down to its long bottom point, making the torso appear even longer. Beaded collars, as shown in the catalog image above, were decorative items worn over the shoulders.
Ladies were always looking for something pretty for their hair. In the photo above, are some fancy hair combs a woman would have inserted into her bun or updo. Below are hairpins that would have helped hold her hair in place when piled on top or the back of her head.
Catalogs boasted a surprising array of wedding bands for both males and females. I don't know if you can read the tiny print, but all that is listed below each ring is the price, sizes available, and if it has a gemstone. At the top of the page, it says the rings are solid gold and sold by weight. Some of the lady's rings have garnet, turquoise or pearl insets. 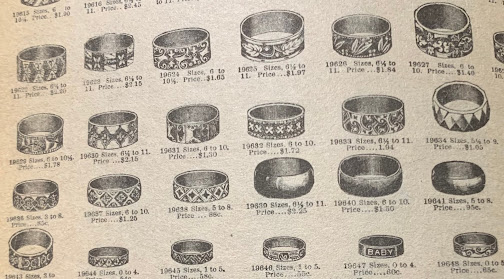 I found these serving sets interesting. At one time, I owned a Victorian water set like the one in the top right picture. The pitcher is attached to the oval-shaped rod so that you can pour water without lifting the pitcher. It was highly engraved and very pretty. Other servers like the ones top left held condiments, seasonings, and oil. 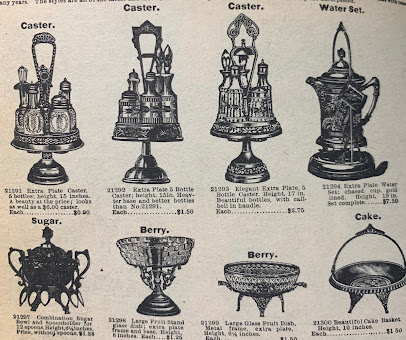 Below are cast-iron toys--or as stated in the catalog--indestructible malleable iron toys. Because they were so sturdy, many of these toys have survived and are still around. Today, these antique toys are highly sought after. 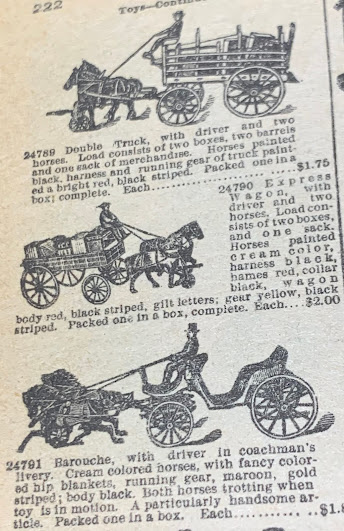 This image shows animal toys that were made of iron and then painted. The horse is a wind-up toy that says it will walk on a flat surface like a real horse. The two people in the box are two mechanical gymnasts that do various feats while turning on a horizontal bar. 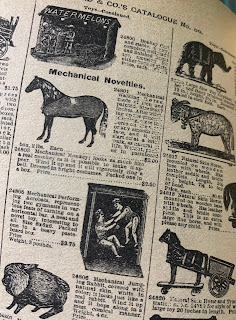 Surprisingly, I found some sunglasses called "colored lens spectacles" in the 1894 catalog.The top glasses are called Coquille Spectacles and are made for weak eyes. They are shell-shaped with smoke or blue lenses, have straight temples, a steel frame, and are of ordinary quality. They only cost 20 cents. What a deal! 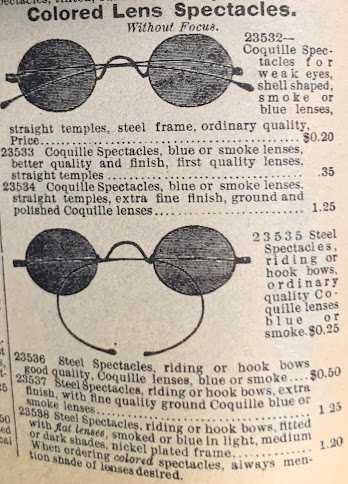