The Old Northwest ~ Out of the Mysterious Unknown

It is one of the best things I can stir my imagination to do—to consider the days of the Old Northwest. Not the northwest as we know it now, but the Northwest Territory organized after the Revolutionary War in 1787. The Old Northwest included all the land west of Pennsylvania, northwest of the Ohio River and east of the Mississippi River below the Great Lakes, and that portion of present Minnesota ceded in the Treaty of Paris in 1783 below what we know as the Boundary Waters. 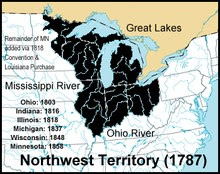 The land was largely a domain of darkness, a vaguely-mapped mystery. Thomas Jefferson took a stab at it when he helped write the Land Ordinance of 1784. He proposed the region be divided into ten states with the names Illinoia, Michigania, Saratoga, Washington, Chersonesus, Sylvania, Assenisipia, Metropotamia, Polypotamia, and Pelisipia. Though Jefferson’s divisions and names didn’t take except for the first two, it’s interesting to note that he didn’t see these divisions as mere acquisitions of other states, but as wholly independent states in themselves, holding all the rights and powers of governance therein.

I'm also intrigued by the various other provisions and protections of the Northwest Ordinance of 1787. Each could be a study in themselves. Here’s the summary from Wikipedia:

“The Northwest Ordinance of 1787 established the Northwest Territory, and defined its boundaries, form of government, and administrative structure. In particular, it defined the bodies of government, established the legal basis of land ownership, provided for abolition and transfer of state territorial claims, made rules for admission of new states, established public education, recognized and codified 'natural rights', prohibited slavery, and defined the land rights and applicability of laws to the Native Americans.” 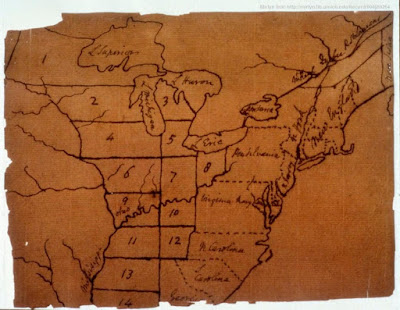 At the time, however, prairies in future Minnesota, Illinois, and Indiana rippled like the waters of the mighty northern lakes themselves, framed to the north in timber that stood in the way of knowing what lay beyond. The blank canvas that would one day become Wisconsin stood as a warring ground between native tribes struggling for dominance of its fish and game. Hardwood dwindled a third of the way up the great “mitten” that was to become Michigan, and then the pine stood unbroken all the way to the straits of Mackinac. In both the future states of Michigan and Wisconsin, there were few trails and traces. Rivers, where they existed, were the paths of exploration and travel by native and voyageur. Nevertheless, great areas of the interior were left unexplored by even the Indians where those areas were difficult to travel.

This is how the Old Northwest stood for thousands of years, silent but for the sound of the wind rushing through the treetops and across the endless grassy knolls; caught in the washing of the waves upon the shores of the Great Lakes and trickling down thousands of miles of rivers. But when time finally caught hold of this vast territory—larger than all of France—it ceased being a lonely, isolated place marked only by small Indian villages, council fires, and scattered trading posts.

First, after the fur traders, came the miners and farmers. Logging wasn’t popular then with the white settlers who came to the Old Northwest. But time caught up at last on the boots of timber cruisers who suddenly took notice of the thick pine, no longer seeing it as something standing in the way, but rather something by which to profit. Those cruisers claimed and marked and measured. When the lumberjacks raised their clamor in the woods, the silence ended with the ring of the axe and the whine of the buzz saw.

I grew up here, in a Wisconsin town built on the swirling dark water of the mighty Wisconsin River, one of those giant tributaries of the Mississippi, and at one of those first mill towns to be planted among the pinelands. Other towns sprang up. In fact, most of Wisconsin’s major cities were built on waterways that marketed the pine, and where hundreds of sawmills—and in later years paper mills—were established.

By the late 19th century, Wisconsin had become one of the premier lumber producing states in the U.S., and the Old Northwest was no longer a place of unfathomable mystery. By the 1890s, logging and lumbering employed a full quarter of all working Wisconsinites. More than 23,000 men labored in the woods, and another 32,000 at the sawmills where timber was turned into boards.

It’s a period of history romanticized by story-tellers, and for good reason. Lumberjacks were a special breed of men, just as their pioneer wives were a sturdy sort of woman, capable and determined. They were willing to put off the comforts of eastern cities for a rugged life, where they worked long hours in the outdoors, enduring the freezing northern winters in shared spaces of mixed personalities, races, and creeds. 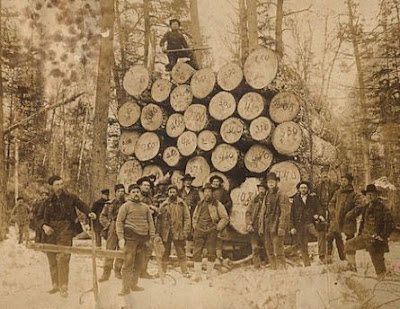 This is my introduction to that time. Join me next month as we learn more together about the daily life of the loggers and lumberjacks in the Great Lakes region, and we’ll remember a particular incident upon which we are approaching an infamous anniversary. 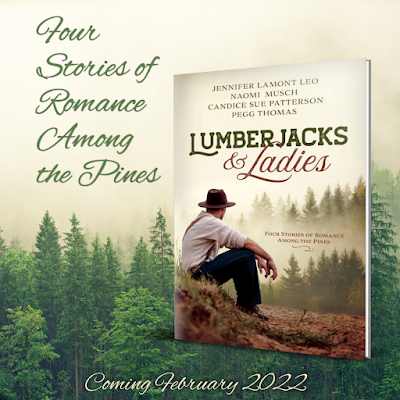 Lumberjacks and Ladies ~ Four Stories of Romance Among the Pines
Naomi Musch is a multi-published author whose great love is historical fiction. Her novel Mist O’er the Voyageur was a 2019 Selah Awards finalist and two-time Book of the Year finalist. The sequel, Song for the Hunter, will release in early 2022, as will Not for Love, her novella in Barbour’s Lumberjacks and Ladies collection. She’s at home in the Old Northwest with her husband Jeff near their adult children and ever-expanding passel of grandchildren. Visit her website and sign up for her newsletter at https://naomimusch.com/
Posted by Naomi Musch at 4:00 AM