What We Wore to the Beach

Evolution of the Bathing Suit

While watching the Olympics, the scanty swim suits of the volley ball players caught my eye as they probably did for most of the nation. That got me to thinking about how far we'd come in attire for swimming for a day at the beach and later for an afternoon by the pool.

The earliest Roman Murals show women participating in exercise and sports with two-piece suits covering their breasts and hips much like bikinis of today, but all pictures of women in bath houses show them nude.

In the middle ages, bathhouses which were out in the open or enclosed still had bathing without clothing or with loin cloths around their hips. Swimming and outdoor bathing were discouraged in the west where Christianity prevailed, so the activity became less popular.

By the 18th century, more and more people were using bathing houses and even going into the water at lakes and beaches. Women were required to wear a swim outfit made of wool or flannel with full sleeves so that modesty or decency were not threatened.

Below is a picture of what those early swim dresses looked like. 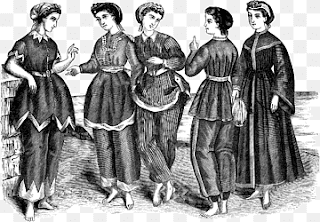 The costumes were made of stiffer fabrics and designed so that the water would not make them cling to the figure. They did allow for trouser type bottoms, but these were not to be worn anywhere but at seaside. The skirts or tops were even weighted at the hem to keep them from billowing up in the water.

Men were still allowed to swim naked in rivers and lakes or in their underwear, but women had to be fully clothed. The bath houses began to require men to wear some type of clothing to cover his loins and women could not go near one without decent clothing covering their bodies.

By the 1800's, bathing/swim wear evolved from the voluminous bloomers and tops to costumes that were easier to handle but still cumbersome by today's standards. The costumes were now two pieces with shorter pants and sleeves. They evolved from ankle-length bottoms at the beginning of the century to a knee-length or even a daring above the knee look later on. 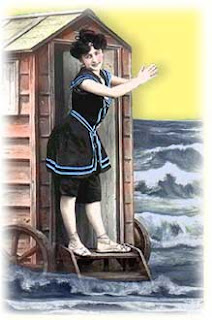 Popular beach resorts were commonly equipped with bath houses. They were designed to avoid exposure of the person in a swim suit. A woman to change from her regular clothing to a swim costume, step into the water and be covered. When she was ready to leave, she re-entered the bathhouse and changed again.

Below are other examples of swimwear. Women liked color and some even preferred more feminine touches with ruffles. The men's suit were usually striped or a combination of solid colors and stripes. 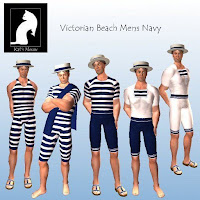 By the end of the 19th century, swim suits began to change as ideas about bathing and swimming changed. Swimming suits became the popular new term, and the suits became smaller and simpler. Development of new fabrics introduced new varieties of more comfortable swimwear.
Then in 1912, female swimming was introduced at the Olympics. The women competing wore this suit introduced by Kellerman in Australia in 1907 which were very similar in style to the ones worn by the men. 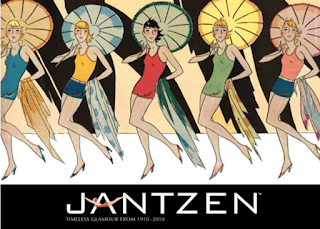 In 1913, designer Carl Jantzen was inspired by the suits and designed the first functional swimsuit that featured shorts on the bottom and a sleeveless or short sleeve bodice. Jantzen is also the first one to coin the term "swimming suits." His company launched a new swim line called Red Diving Girl in 1915. 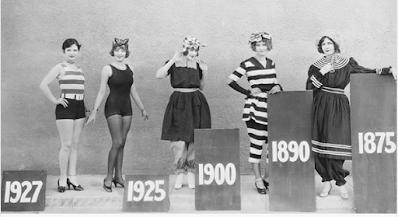 By 1927 the legs were completely bare and the swimsuits became popular in the movies. Swimming turned from being in the water all the time to spending time in the sun and "tans" became the fad to replace the pale, protected from the sun complexion. Swimsuits were designed more with fashion in mind. A lady could loll in the sun and look fashionable, too. 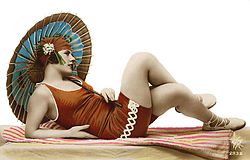 Men's styles changed as well as they did away with the tops and bared their chests. As time went on, the bottoms even became shorter and shorter. Then Hollywood made more movies with bathing beauties and the suits grew lower in the back and higher on the legs. 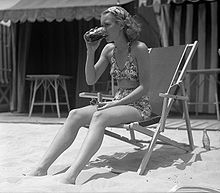