A MINISTER’S GUIDE TO CAMPING 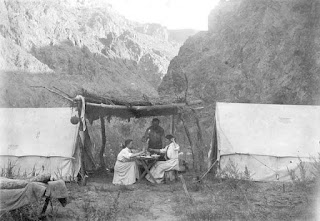 Oh, the joys of summer! If you’re like 80 million Americans, you probably left your comfortable home for a few days and took off for the Great Outdoors. Whether roughing it in a tent or glamping in an RV, people have been intrigued by nature as a recreational pastime since 1869.

According to Terence Young, the author of Heading Out: A History of American Camping, the word “camp” was most likely inspired by military encampments. 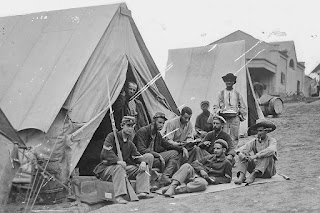 Prior to the thought of going into the wild just because, those who camped did so for their jobs, such as military, or traveling from one part of the country to another. This changed when a minister from Connecticut decided to experience the Adirondacks in upstate New York up close and personal. William H. H. Murray, highly respected in his field, wrote “narrative exercises” for his own use. Often, clergy wrote out their thoughts in this way as training to improve their sermons. These narratives were initially only for his personal use.
After five years of collecting notes, a friend in the publishing industry persuaded him to submit them. Skeptical, Murry didn’t expect anything to come from it. The publisher was equally doubtful. However, after only two days, he contacted Murray with an offer. He found the minister’s casual writing style endearing. Thus, his book, Camping in the Wilderness: Or Camp-Life in the Adirondacks was born. It’s still available at Amazon. 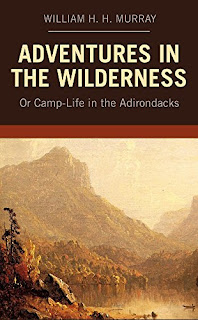 Murray covered everything, including where to go, how to get there, and what to eat. One of his tips concerned naturalists when he suggested the way to fend off wolves was to set a stump on fire. The table of contents is entertaining in and of itself. Chapter II: The Nameless Creek. Chapter V: Loon Shooting in a Thunder Storm. Chapter XI: A Ride With a Mad Horse in a Freight Car. Yeah, I bought it.

The minister’s amazing and simple notebook of narrative exercises opened a population boom in the “wilderness.” Around 200 hotels sprang up in the Adirondacks by 1875. By the turn of century, the Adirondacks summer population rose from 3000 in 1869 when the book hit the presses to 25,000 thirty years later.
However, there was at least one draw-back. That first summer boasted heavy rains in upstate New York. Some of the eager nouveau campers came back wet and angry, claiming the information given didn’t cover that aspect of camping. This didn’t deter the subsequent stampede of tourists between 1869 and 1870 who were dubbed “Murray’s Rush.” Those who came back disillusioned or with injuries were called “Murray’s Fools.” 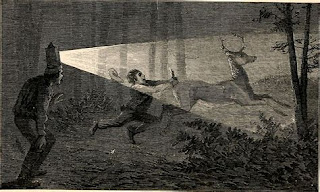 My family has done our share of camping. Starting in a tent and evolving to pop-ups, eventually moving on to the glamper I call Big Bertha. To think it’s only been a century and a half since this movement began is surprising to me. Nature has been around for thousands of years, and we’ve only just begun to scratch the surface of finding ways to enjoy it. So go! Sleep under the stars. Make S’Mores. Cast a fishing line and give God the glory for His wonderful creation.
In my story, Periwinkle in the Park, the heroine, Peri, is a naturalist. Camping was already invented by the time Rocky Mountain National Park was established in 1915, and Peri helps to educate those who wish to learn more about the Great Outdoors.
A Bouquet of Brides Collection

Available in paperback only.
Meet seven American women who were named for various flowers but struggle to bloom where God planted them. Can love help them grow to their full potential?
"Periwinkle in the Park" by Kathleen Kovach
1910, Colorado
Periwinkle Winfield is a hiking guide helping to commission a national park. But a run-in with a mountain man who is determined to keep the government off his land may place her in great danger.