Evolution of the Bathing Suit

By the end of the 1930's, swimsuits had changed even more with the development of new fabrics such as latex and nylon. Swimsuits now hugged the body and were designed with shoulder straps that could be lowered to allow even tanning. 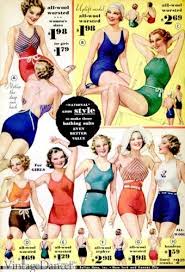 This is what your choices would be from a catalog in the 1930's. More colors, clingy stretch fabric, less fabric and more skin. Companies like Cole of California, Catalina and Jantzen really took off. By the end of the decade, an even more revealing swim suit came into fashion--the two-piece. 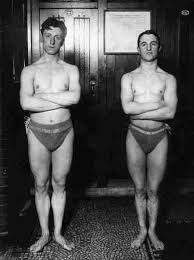 Although many men still preferred the tank top with
shorts for their choice of swimwear, others preferred to
swim bare chested. Those involved in competitive
swimming chose smaller trunks to give them more freedom of movement.

Women's swimwear for competition also became more form-fitting for the same reason. They could swim faster with more freedom in the new suits. 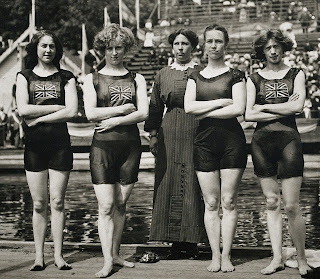 Still, these were not the shorter versions revealing more skin that came into popularity in the 1940's when Hollywood got involved and started making motion pictures featuring swimming sensation Esther Williams. The pin-up girl in a swimsuit became popular during WWII with movie stars such as Betty Grable, Ava Gardner, Esther Williams, and Hedy Lamarr posing for photographs for our GI's. Here is a picture of Claudette Colbert photographed at the beach in the popular two piece suit. 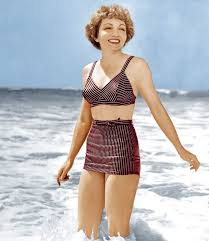 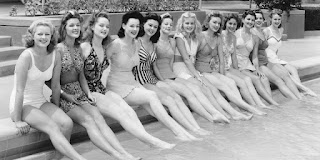 Because of the war, suits began to conserve with even less fabric as more and more midriff was exposed and swimsuits were cut higher on the legs. The end of the war did not change that style and the bikini swimsuit grew in popularity although most women preferred the more modest one piece or two piece suit.

Swimwear began to be used in advertising and beauty contests became even more popular with their swimsuit competitions. Movies featured swimmers in movies like Million Dollar Mermaid  based on the life of Annette Kellerman. The word swimsuit was actually coined by Cole of California and became almost synonymous with bathing beauties. Contests such as Miss America and Miss Universe featured the contestants wearing swimsuits.

As the swimsuits shrank, pin-up pictures became more popular. Games like beach volleyball became more popular as the smaller suits gave the body better and quicker movement. Because of its "explosive effect" on the viewer, the bikini got its name from Bikini Atoll where several nuclear tests were performed. 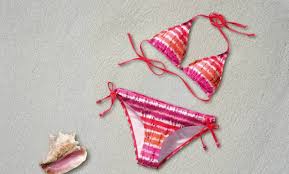 Through the last sixty years, swimsuits have evolved even more and it seems that the less fabric they can use, the better the suit is. Styles like the Speedo and the thong are examples of the this. Some of them expose such a large portion of the body that it's almost as though we're heading back to the days of nude bathing. We even have nude beaches in some parts of the world.

Whatever the preference for swimming may be, both men and women want comfort and style. We've come a long way in what many find that to be. 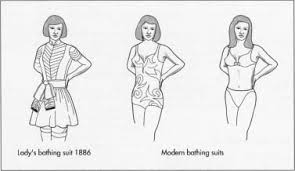 Which type swimsuit do you prefer? One or Two-piece? Do you prefer beach or pool swimming?

Christmas is around the corner and time for Christmas reading begins. My newest release is The Christmas Secret. 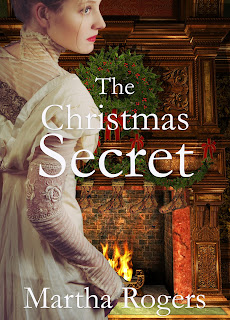 Many stories abound concerning the old Farnsworth Manor Estate with a witch or a ghost being the occupant sometimes seen as a shadow in the window. Penelope Carlson, a reporter for the town newspaper, has always been interested in the Farnsworth house because of Nathan Farnsworth and her love for him so many years ago. A week before Christmas, a news story dug up by another reporter paints a dark picture of Olivia Farnsworth, Nathan's grandmother, and leaves many questions unanswered. Because his grandmother gave Penelope the true story to reveal at Christmas instead earlier, Nathan believes Penelope has betrayed his trust. Penny must make amends and make sure the true story is told. Will she be able to win back Nathan’s love and trust and help him to carry on the Farnsworth legacy? 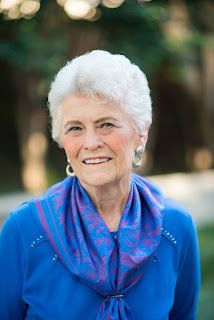