The Ancient Game of Mini Golf

By Kathy Kovach
How was your summer? Was it filled with boating, camping, picnicking? Did you give the old barbeque grill a good workout? Perhaps you partook in the ancient sport of miniature golf. What’s that you say? Mini golf isn’t ancient? Oh, I beg to differ!

There has been much speculation as to where the putting-exclusive courses originated. Some can trace them to China as early as 937 to 975 AD. Denmark lays claim to having invented the game around 1297. The French, not to be outdone, claims their game of pell-mell was the precursor, although it’s also said this game led into croquet. Germany and Mexico make similar claims of being the first to offer a miniature version of the original. I’m so confused.
I would hazard to say that all of these assertions are on the same par with each other.

Let us now address the two popular beliefs of who invented the game as we know it today.

Scotland, a country that also lays claim to the invention of golf (the big one,) asserts that their women came up with mini golf as a way to play without seeming unladylike. It was not proper back in 1867 for ladies to swing a club over their heads. That handicap was alleviated when they formed The Ladies Putting Club of St. Andrews, located near the site of the British Open, St. Andrews Golf Course. Wives could then accompany their husbands as far as the greens set aside for them and they, assisted by their caddies, practiced their putting. The group went on to become quite prestigious and is still going strong today.
The ace in the hole, however, goes to a man named James Barber in 1916 North Carolina. He built an 18-hole miniature version of a golf course on his property. Upon approval of his venture, he named it Thistle Dhu (this will do.) Instead of long greens and sand traps, Barber incorporated gardens, fountains, and geometric designs into the putting-only enterprise. Thistle Dhu became so popular that others copied the innovative idea. Soon putting greens were springing up in various locations throughout America, including New York rooftops.
Putting greens rose in popularity, and before you could shout “Fore!”, they peppered the landscape. In 1927, forward thinking Garnet Carter put a golf course on his property on Lookout Mountain in Tennessee. He hoped to draw visitors to his hotel. His wife, Frieda Carter, designed the course around the large boulders within their acreage. She used a whimsical theme, keeping with the miniature idea, and soon garden gnomes took up residence. They watched with some amusement as guests maneuvered golf balls up the hills and around the trees and rocks. They named the unique tourist spot Tom Thumb, and went on to patent it. By 1930, under the umbrella of Fairyland Manufacturing Corporation, Carter had sold 3000 of his Tom Thumb miniature golf course franchises. Some must have still been in play thirty years later, because I remember enjoying a Tom Thumb course as a kid. To see the remnants of the first course in Tennessee, go here.

The Great Depression took its toll on the miniature golf course business and several shut down, halting any new builds. Some stayed afloat, including a notable one located in Rochester, New York, named the Parkside Whispering Pines Miniature Golf Course. It went on to earn a listing on the National Register of Historic Places in 2002. 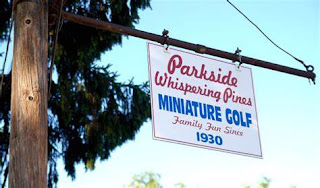 Moving on into the mid-century, when the country began to bounce back from a depression and two world wars, mini golf made a comeback. Families were ready to get out and have fun. Course designers added entertaining themes and obstacles. Color coded clubs and rainbow-colored golf balls became the staples of one of America’s favorite pastimes. I always choose the purple ball. 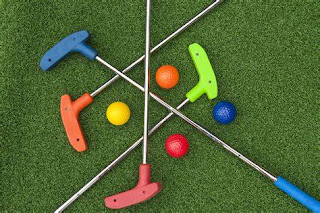 Miniature golf has taken on many names. Goofy Golf, Adventure Golf, Crazy Golf, Mini Golf, and Putt-Putt to name a few. The two latter are official names and aren’t interchangeable. Mini Golf uses the crazy themes and hazards, Putt-Putt is closer to the official game of golf. The first allows a par of 2-6 while the latter maintains a strict two par per hole. A good description of the differences is at this link. The World Mini Golf Sports Federation (WMF) is a highly recognized organization that sponsors prestigious tournaments. 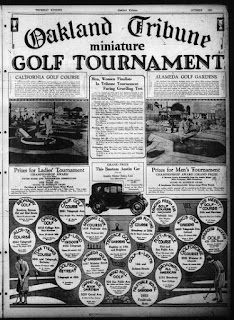 Miniature golf has come a long way from its humble roots amongst rocks and trees to a major form of entertainment. 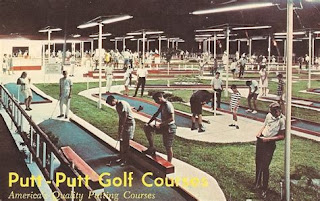 I hope I didn’t duff the ball while explaining the complex world of miniature golf. If so, I’ll take a Mulligan.