A trip to Mont St. Michel on the coast of Normandy would not be complete without visiting La Mère Poulard’s restaurant for the best omelet you will every eat. 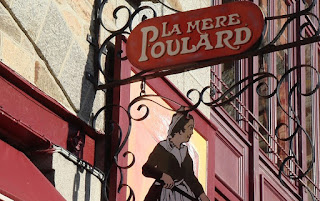 Of course, first you have to plan your trip so your car isn’t covered by the tides that come in like clockwork. However, there is a causeway that connects it to the mainland now. Still, accidents occur.

Mont St. Michel was built in the 8th century, when St. Aubert, a bishop, built an oratory there after receiving a vision of the archangel, St. Michel. Monks carried stones from the mainland when the tide was out. It became a destination for pilgrims during the next few centuries, survived the Hundred Years’ War, and then it became a prison (not unlike Alcatraz) under Napoleon. 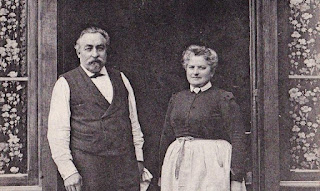 Mère Poulard and her husband opened the restaurant in 1873. At first, Madame Poulard created the omelet to be an appetizer, despite its large size, when patrons of her restaurant and inn had to wait for delayed food to arrive from the mainland because of the tides. 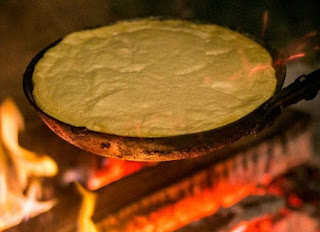 The Poulard omelette is more like a soufflé than the traditional omelet because the egg whites and yolks are separated and beaten into a froth. Then they are cooked over an open fire in a buttered pan—and there’s nothing to compare with butter from Normandy. While Americans eat omelets for breakfast, les français eat them for lunch or dinner.

I remember visiting Madame Poulard’s while in college, and it still is the best omelet I’ve ever eaten. If you have a chance to visit the restaurant, you’ll be in good company. King Edward VII, Maurice Chevalier, Leon Trotsky, Christian Dior, Ernest Hemingway, French presidents, Winston Churchill, Margaret Thatcher, and even Marilyn Monroe have crossed its threshold.

While the recipe is a secret, here is a good facsimile:

Mère Poulard’s Omelette Separate the whites from the egg yolks. Add the grated Gruyere and melted butter, salt and pepper. Mix the yolks and the cornstarch. Set the whites with two teaspoons of water and lemon juice. Gently stir the whites into the yolks. Pour into a greased oven-proof pan and allow to cook on heat (fire preferably of course!) then finish in the oven (preheated to 390 degrees) for 7 to 8 minutes to raise to a soufflé. Serve with a salad.