As a native Texan, I am always fascinated by the contrasts of climate, vegetation, and land formations that exist in Texas. From the Guadalupe Mountains and Palo Dura Canyon in the west to the pine forests and lakes in the east and from the Red River in the north to the beaches along the coast, visitors to Texas can find great places to visit.

I have traveled all over Texas during my lifetime, but the one place I've missed is Big Bend National Park. It's one of those rare places that attracts campers and hikers of all ages.

Indians occupied the territory and date back to the 1500s. The Chisos Indians were primarily a tribe of hunters and gatherers although they may have practiced limited agriculture on a seasonal basis. Not much is know about their origin, but their language closely resembled that of the Conchos Indians of northern Chihuahua in Mexico called Uto-Aztecan. The mountains are named for them. 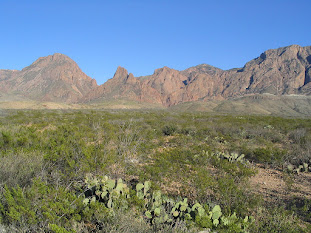 At the beginning of the 18th century, historic records indicate that the Mescalero Apaches invaded the Big Bend region and displaced the Chisos Indians. Then the Comanches passed through along the Comanche Trail as they traveled to and from raids into the Mexican interior. These raids continued until the middle of the century. The last of those Native American military leaders remained active until the late 1860's. The land was so barren that there was little if any interest in establishing towns and settlements. Only the Indians had a few places where they lived.

Spanish explorations began as early as 1535 with the first Spanish explorers headed by Alvar Nunez Cabeza de Vaca. Others followed his expeditions with explorers seeking gold and silver or farm and ranch land. Franciscan missionaries hoped to establish centers where they cold evangelize the natives. In order to protect the frontier of New Spain, they established presidios or forts along the Rio Grande. Some of these were soon abandoned because of finances and even the forts couldn't actually stop all the invasions into Mexico. Some partial structures still stand and can be seen in various sections of the area. 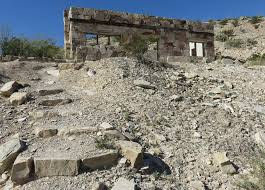 At the beginning of the 18th century, historic records indicate that the Mescalero Apaches invaded the Big Bend region and displaced the Chisos Indians. Then the Comanches passed through along the Comanche Trail as they traveled to and from raids into the Mexican interior. These raids continued until the middle of the century. The last of those Native American military leaders remained active until the late 1860's. The land was so barren that there was little if any interest in establishing towns and settlements. Only the Indians had a few places where they lived. What the Spanish had tried to develop had gone by the wayside.
By the end of the Mexican-American War in 1848, the military had begun to make surveys of he land and established forts and outposts across Trans-Pecos Texas. These were built to protect settlers from Indian attacks. A large number of these soldiers were African Americans and came to be known as "buffalo soldiers", a name given to them by the Native Americans. The first American with African ancestry to graduate from West Point was Lieutenant Henry Flipper and he served in the town of Shafter, Texas at the end of the 19th century.

Because of its vast expanse of land, over 800,000 acres, the area was further explored for mining of silver and gold. Ranchers saw as good land for cattle, sheep, and goats. By 1880 and later, these ranches occupied most of the area, but the delicate environment of the desert was soon overgrazed.
By the late 19th and early 20th centuries, valuable mineral deposits were discovered and settlers flocked to the land to work in the mines or for the mine companies cutting timber for the mines and smelters. The towns of Boquillas and Terlingua were established to serve those mines. At the same time, the flood plain of the Rio Grande was settled by farmers, but they were usually no more than clusters of families living and farming together on one area. Their success depended entirely on the land.
Today, the town of Terlingua is a ghost town, forlorn and abandoned in the middle of the desert area. 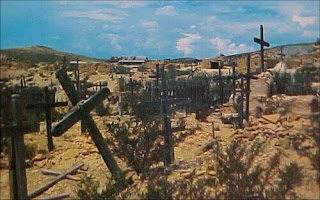 This is all that's left of the Mariscal Mine from the late 19th century. 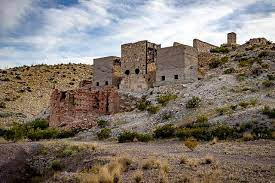 In 1916, a raid on Glenn Springs motivated President Wilson to order mobilization of the Texas National Guard to aid the federal forces. They established a cavalry camp at Glenn Springs where it remained until border situation improved in 1920.
By the 1930s, the people of Texas realized the land was one of stark, unique contrasts and beauty. They wanted to preserve it for future generations to enjoy. In 1933, the Texas Legislature passed legislation to establish the area as Texas Canyons State Park, but a short time later, they renamed it Big Bend State Park. In 1935, the US government became involved, acquired the lands and Texas deeded the land to the federal government. On June 12, 1944, Big Bend National Park became a reality. Covering 801,163 acres, it opened to visitors on July 1, 1944. Approximately 118 miles of the 1000+ mile Rio Grande River in the park forms a boundary between the United States and Mexico. However, because it is an international boundary, it faces certain constraints in enforcing park rules and policies. The Treaty of Guadalupe Hidalgo establishes that the park's territory extends on to the center of the deepest river channel as it flowed in 1848. The other side belongs to Mexico. 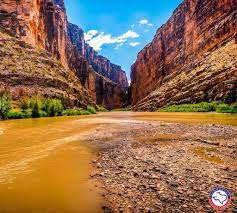 Sign for the entrance to the National Park as it is today. Thousands of visitors come to the park to hike, camp, and explore. Modern lodgings are available as well. 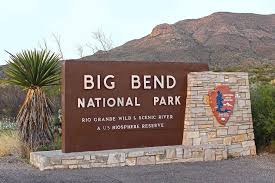 So many unusual rock formations and cliffs and plants abound that it's hard to include them all, but here are a few of them. 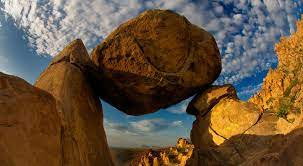 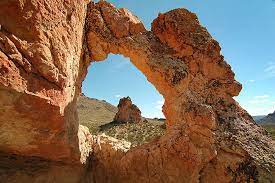 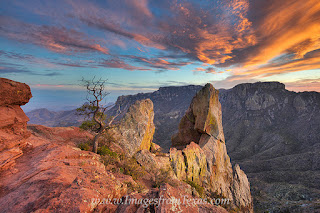 Texas is a great state to visit and explore, but then so much of the United States is. What does your state have to offer tourists and to lure them to come to your state?