The Taste of Autumn 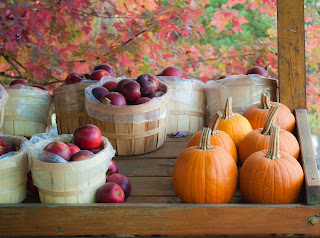 Fall is my favorite time of year. A chill kisses the morning air. Leaves present their last hurrah in a finale of bursting color. Spicy, earthy scents rise up from the path, like an incense presented upon the death of something beautiful.
Then there are the tastes. A cornucopia of delicious delicacies only to be appreciated during the season that ushers in winter. The first, and most obvious, is pumpkin. Imagine yourself on a New England farm in 1672. Pumpkins grew in abundance, and thus was born the first recorded recipe in New Englands Rarities Discovered by John Josselyn. 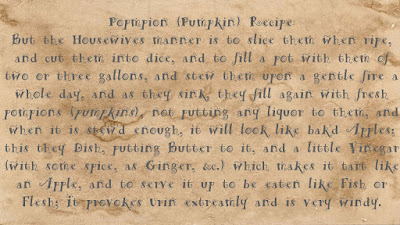 In the 1800s, sweet pumpkin dishes began to grace holiday tables. Pumpkin pie was the most popular, but other creative recipes also made an appearance. Such as a scooped-out shell filled with ginger-spiced milk and roasted by the fire. Mmm...wish I had a recipe for that.
Autumn harvest also reminds me of apples. From Golden Delicious and Granny Smith to Gala and Pink Lady. I can still remember the aroma of fresh apples bobbing in a tub just before I plunged my face in to capture one of the beauties, during a festival or party at home. Having a slight overbite gave me an unfair advantage. This tradition didn’t start out as an innocent game, however.

Hundreds of years ago, the ritual started with the British as a way of choosing a mate. The romantic game may have had superstitious roots, but I’m sure it evolved into a fun way to connect with that special someone. In one variation, each apple was assigned to a different fellow. The young lady would try to bite into the apple of one she fancied. If she succeeded in one try, their romance was certain. Two tries meant he would court her, but their romance would fade. A third signaled a doomed failure as a couple. Not sure I’d keep trying. I’d just grab the guy and run. Another game constituted a race. Whichever young damsel caught a bobbing apple first would be the next to marry. I wonder if the men ever deigned to get their faces wet? 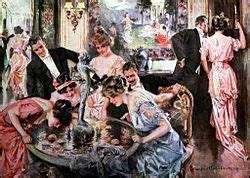 The game eventually faded in popularity, but was brought back at the end of the 19th century by Americans seeking their immigrant roots.
Finally, a less healthy and cavity-inducing indulgence shows up every fall. The stores have bags of the stuff, and my husband becomes a child when I bring the first bounty home. Can you guess? Candy corn, of course. The most loved/hated confection in existence.

Most historians agree that the peculiar candy was introduced in the 1880s by George Renninger, an employee of the Wunderle Candy Company in Philadelphia. At this time, farmers made up about half of the work force, therefore, marketing swung that way. Candies were formed into tiny pumpkins, turnips, chestnuts, and even pea pods. Renninger came up with a unique tri-colored design in the shape of a corn kernel. In 1898, Goelitz Candy Company, now called the Jelly Belly Candy Company, picked up the confection and labeled it “Chicken Feed.” Corn was not yet used for human consumption, but given to the livestock. Today, approximately 35 million pounds of the corn syrup based sweet treat are sold every year according to Lauren O’Toole, a spokesperson for the National Confectioners Association. My husband is a major stock holder. 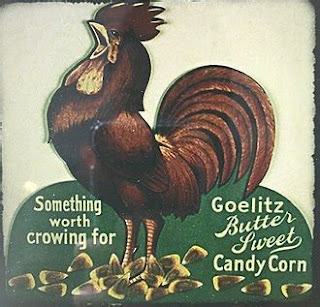 Every season has its signature taste. Peppermint, sugar cookies, and hot chocolate in winter. Spring vegetable dishes. Watermelon and strawberries for the hot summer. But the autumn senses tantalize the most, in my opinion, with the rich harvest tastes and smells that seem to laude Americana.
Titanic: Legacy of Betrayal
A secret. A key. Much was buried on the Titanic, but now it's time for resurrection.