Sarah Josepha Hale: Author, Influencer, and "The Mother of Thanksgiving"

By Elaine Marie Cooper Until very recently, I’d never heard of Sarah Josepha Hale. But after reading about her, I may now be one of her biggest admirers. 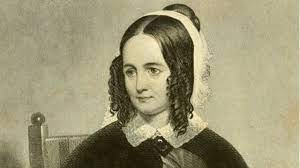 She was born in 1788 in Newport, New Hampshire to a veteran of the American Revolution and his wife. Sarah’s parents both believed in education for their sons as well as their daughters, a rare concept in that day. She was homeschooled by her mother and her brother, Horatio, who had attended Dartmouth. She also excelled at self-learning. She became a local schoolteacher and, in 1811, she met David Hale, a lawyer, who supported Sarah in her scholarly endeavors. The couple married in 1813 and had five children. Sadly, David died shortly after the birth of their last child in 1822. According to the National Women’s Historical Society, “Sarah was so grief-stricken, she wore black for 57 years until her own death in 1879.” 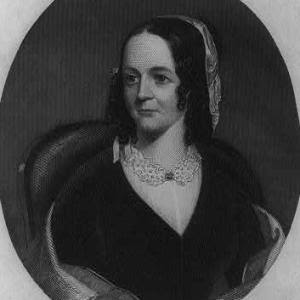 Prior to David’s death, Sarah had been a rather quiet, unassuming woman devoted to her home and family. Widowhood forced her to consider other means of income and she began writing poetry. In 1823, with the financial help of her husband’s Freemason lodge, Sarah published a collection of her poetry entitled, The Genius of Oblivion. Four years later, she published her first novel, Northwood, North and South. She became one of the first novelist to write about slavery. The story supported relocating slaves to freedom in Liberia. Sarah Hale is best known for her famous book, Poems for our Children. It included a beloved story from her childhood. “Mary Had a Little Lamb” was instantly successful as a favorite nursery rhyme. 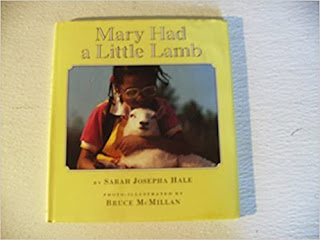 In 1828, the Rev. John Blake asked her to accept the position of editor at The Ladies Magazine. She enthusiastically accepted, although she let it be known that she preferred the title of “editress.” The editor of Godey’s Lady’s Book bought the Ladies Magazine and Sarah Hale became editor. She insisted that she edit from Boston so she could be close to her youngest son, William, who attended Harvard. 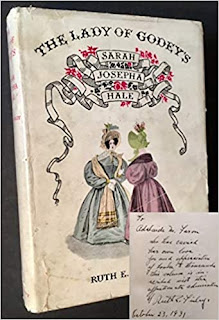 She remained editor at Godey’s for forty years until she was nearly 90. Godey’s readership was the largest of its day, with over 150,000 subscribers. Both Godey’s and Sarah were considered the largest influencers on American life during that time. But Sarah Hale’s influence expanded beyond literature. She found worthy causes that she supported wholeheartedly. She raised $30,000 for the completion of the Bunker Hill Monument. When construction stalled, she didn’t give up. She asked her readers to donate one dollar each. The she organized a craft fair in the Quincy Market where shoppers could purchase handmade quilts, jewelry, baskets and signed letters by Washington, James Madison, and the Marquis de Lafayette. Through her efforts, the 221-foot obelisk was completed. Sarah supported the preservation of George Washington’s Mt. Vernon plantation. She hoped it would be a symbol of unity that both the Northern and the Southern states could agree upon. 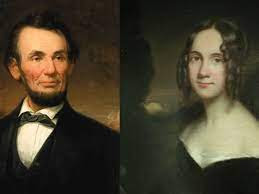 In 1846, before the Civil War, Sarah could see the divisiveness growing in the United States. She wrote a letter to President Zachary Taylor to encourage the formation of a national holiday called Thanksgiving. He declined. She did not give up. She continued her efforts by writing to President Fillmore. Then Presidents Pierce and Buchanan. Finally, she wrote to President Abraham Lincoln, as well as Secretary of State, William Seward. They received the letters in 1863 following the Battle of Gettysburg. Within a week, Seward had drafted Lincoln’s official proclamation, fixing the national holiday on the final Thursday of every November. It was a move the two men hoped would help “heal the wounds of a nation.” Sarah Hale’s nickname became the “Mother of Thanksgiving.” Sarah Hale continued to write many novels and poems. In 1877, Thomas Edison used the opening lines of her beloved nursery rhyme, “Mary Had a Little Lamb” as his first attempt to record his voice on a phonograph. It recorded it, much to his surprise. Hale was a combination of fiercely feminine while espousing the rights of women to be well educated, own property, and be in the workplace. She drew the line at women being politically active, encouraging them to “shape the morality of society.” Through her writings, she hoped that “women would be a force of peace and stability, fully separate from the partisan political divides that preoccupied their men.” The woman who influenced so many in the 19th century, closed her eyes in sleep at her home in Philadelphia, on April 30, 1879. 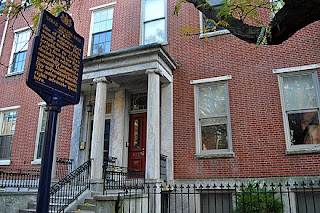 Award-winning author, Elaine Marie Cooper, never thought she’d see her name listed on published books. Now researching her eighth novel and ninth book, she is too caught up in her passion to write to stop any time soon. She says the Lord called her to create books and she’ll obey that calling until He says to stop. Her most recent releases are “Scarred Vessels,” winner of the 2021 Selah Award, and “Love’s Kindling,” finalist in the 2020 Selah Award, and Book 1 in the Dawn of America series. Her only non-fiction release is the memoir of her daughter, Bethany who passed away from a brain tumor in 2003. It was also a Selah Winner in 2015. Cooper is a mom of 2 grown sons and GiGi to 5 of “the most beautiful grandchildren ever.”
Posted by Elaine Marie Cooper at 4:00 AM