The Wearing of the Wool

Do you live in a cooler climate and love to wear wool? Not only is it warm and soft, but natural. Sheep’s wool is so commonly used in our society that I began wondering how people used to shear a sheep back before there were things like electric clippers and what they used wool for once they obtained it. So – let's figure this thing out. Who first decided to “shear one of those fluffy animals and do something with that warm hair? Come to find out, sheep shearing is one of the world’s oldest industries. Nowadays wool is clipped by skilled shearers about once a year from the sheep. Wool’s many uses are the reason for the success of the sheep industry (mutton – not so much, in America anyway.).

Some sources say sheep were first domesticated over 10,000 years ago and raised as a food source in Central Asia, but shearing sheep began around 3500 B.C. when man learned to spin the wool. The production of wool is the oldest trade commodity known to man. The wool industry is mentioned in the Old Testament and was the first widespread international trade throughout ancient civilizations. 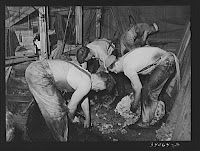 Most of the explorations organized by Queen Isabella of Spain were financed through her wool trading business. In the 1400’s, she paid for the voyages of Columbus and the conquistadors with profits from sheep shearing. The sheep were also used as a food source for Columbus and he left sheep in the New World when he sailed to Santo Domingo and Cuba. These sheep, known as Churras, are the ancestors of American sheep and were bred by the Navajo tribe for food and wool.

England attempted to prevent breeding and shearing sheep in the American colonies of the 16th and 17th centuries to keep them dependent on English wool, but the colonists resorted to smuggling sheep into America and established their own lucrative wool business. By the mid 1600’s, the Massachusetts General Court required all children to learn how to shear sheep, spin the wool and weave it too. Imagine that!

The wool trade has been successful throughout the world for many centuries as an easily sustainable resource with many uses. It is the oldest tradable commodity and has only changed in the methods that the wool is taken from the sheep.

Starting out as a very tedious process of hand clipping, the art of shearing has come a long way.

The earliest known mechanical machines were invented in the late 19th century and revolutionized the procurement of wool. It was a two person job and involved turning a handle.

Father had cleaned the sheepfold and built a platform across one end of it. He and Lazy John each caught a sheep, set it up on the platform, and began cutting off its wool with long shears. The thick white mat of wool peeled back, all in one piece, and the sheep was left in bare pink skin. With the last snick of the shears the whole fleece fell on the platform, and the naked sheep jumped off it, yelling, “Baa-aa-aa!”

As the story goes, it was young Almanzo’s job to carry the fleece up to the barn loft once it was shorn and the workers teased him that they would be done first while he still worked. Almanzo outsmarted them by hauling a sheep up to the loft before it was shorn. The Wilders evidently used most of their wool for the family. The women spun the fleece into a fabric they used for all sorts of garments and made yarns for knitting and other needlework.

Sheep shearing has come a long way since Almanzo took that sheep to the loft to fool French John and Lazy Joe. Today electric clippers are used by professional shearers. Hundreds of sheep can be sheared in a day by one skilled operator. Sheep shearing has even become a competition sport whereby shearers attempt to outperform each other in both time and leaving the fleece in one piece. Thankfully, the spinning is now done by machines!

Sheep shearing is a skill unlikely to ever die out, with wool being such a high commodity across the world. If you have the chance to watch a sheep shearing, check it out. I think it’s just as interesting a process as it was back in Almanzo’s time. 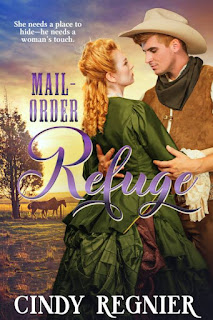 Rand Stafford isn't looking for love. He'd ridden that trail until his fiancée left him with a shattered heart. What he needs is a wife to help care for his orphan nieces. Desperate, he places an advertisement and hopes for the best.

Fleeing her dishonest employer, hiding herself on a Kansas cattle ranch sounds like the perfect refuge to Carly Blair. But its sanctuary comes with a price—a husband. While marrying a man she doesn't know means sacrificing her dreams, it's better than what she leaves behind.