Vanderbilt University & the Woman We Can Thank for its Founding

Vanderbilt University is located on a beautiful park-like campus in the heart of Nashville, Tennessee. Well known as a place of academic excellence, Vanderbilt is one of the leading medical and scientific research schools in the world. Named after the wealthiest man in the country at the time of the school's founding, Vanderbilt University has solidified its place in American history.

If it hadn't been for a woman, the university we know today probably wouldn't exist.

Prior to the Civil War, the leaders of the Methodist Episcopal Church South hoped to establish a regional university where men could be trained as ministers. Before the organization could move forward with the idea, however, war erupted. Four long, painful years of death, financial hardship, and destruction of the South followed. After the war and amid reconstruction, the idea of a training university once again surfaced. In 1872, Bishop Holland Nimmons McTyeire lobbied that Nashville was the ideal central location for the school and the leaders of the MECS agreed. The charter for Central University was formed, but one big problem stood in their way: there simply wasn't any money for the project. People of the South were still recovering from the ravages of war. Feeding their families was far more important than funding a school.

The following year Bishop McTyeire traveled to New York City for a medical procedure. His wife's cousin, Mrs. Frank Armstrong Crawford Vanderbilt, wife of Cornelius Vanderbilt, the country's wealthiest man, offered to let the bishop recover in their home. (FYI: Frank was named after a family friend, Frank Armstrong, before her parents knew she was a girl.) Frank had briefly been married to a man named John Elliot before marrying Cornelius in 1869 (he was 75 and she was 30) after the death of his first wife, Sophia Johnson. Frank signed a pre-nuptial agreement, agreeing to receive $500,000 in bonds after his death, a great sum in those days but a fraction of Vanderbilt's fortune.

During the time Bishop McTyeire stayed in their mansion, he shared the idea of a training university with the Vanderbilts. Passionate about the project, McTyeire declared "it would contribute to strengthening the ties which should exist between all sections of our common country." Cornelius, nicknamed the Commodore, was a native of New York and had plans to build a university on Staten Island in honor of his mother. But after hearing about the dream of the MECS, Frank knew this was the university they should support. All she had to do now was convince her husband of it.

The Commodore wasn't known for philanthropy. It is said that when he saw someone on the sidewalk who might ask him for a cigar, he would cross the street. Although he was toying with the idea of building a university in New York, the real motivation behind it was his mother. His young wife, however, had other ideas. Frank was a southern girl. She grew up in Mobile, Alabama, and witnessed the ravages of war firsthand. Financially ruined after the battles, she and her widowed mother moved to New York City to seek their fortunes. Their lives were forever changed when they decided to call on their cousin Cornelius Vanderbilt.

Plying her southern charm, Frank went to work to convince her miserly husband of the merits of the Methodist university in Nashville. Along with the bishop's knowledge of Nashville's central location and business potential, it wasn't long before Cornelius was caught in their net. He offered the bishop $500,000, although the total endowment would eventually be increased to $1,000,000 (about $22 million in today's money). A stipulation of the gift was that McTyeire was to work directly with Vanderbilt with no committees or boards involved. Another stipulation was that McTyeire was to become the first president of the Board of Trust and that he was to build for himself a residence on the campus. According to the Commodore, it was to be the largest and nicest of all the residences built for faculty.

The rest, as they say, is history. Bishop McTyeire immediately had the charter changed to Vanderbilt University, acquired land, and hired an architect. In the fall of 1875, about 200 students enrolled at Vanderbilt, and in October the university was dedicated. Today, Vanderbilt University is a private research university with approximately 6,900 undergraduates and more than 6,200 graduate and professional students. Comprised of 10 distinct schools and colleges on one centralized campus in downtown Nashville, Vanderbilt is consistently ranked as one of the nation's top 15 universities by publications such as U.S. News & World Report, with several programs that consistently rank in the top 10.

They say the university is named after the Commodore, but I can't help but wonder if the real namesake is actually his wife! I think Frank Vanderbilt would be quite pleased with the way things turned out, don't you?

UNDER THE TULIP TREE
*2021 Christy Awards Finalist*
Sixteen-year-old Lorena Leland’s dreams of a rich and fulfilling life as a writer are dashed when the stock market crashes in 1929. Seven years into the Great Depression, Rena accepts a position interviewing former slaves for the Federal Writers’ Project. There, she meets Frankie Washington, a 101-year-old woman whose honest yet tragic past captivates Rena. Frankie’s story challenges Rena’s preconceptions about slavery, but it also connects the two women whose lives are otherwise separated by age, race, and circumstances. Will this bond of respect, admiration, and friendship be broken by a revelation neither woman sees coming? 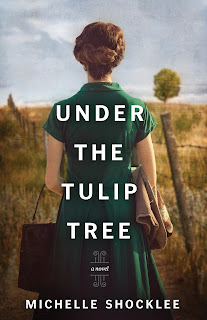 For purchase options, visit www.MichelleShocklee.com
Posted by Michelle Shocklee at 1:00 AM