The Letter of Aristeas by Patty Smith Hall

Many of you don't know this, but I went back to school to study history earlier this year. Going back to college has been on my bucket list for years, and I've got to say, I'm throughly enjoying myself. I was a bit concerned about taking a Western Civilization class though, mainly because my experience with it in history was horrible. The teacher gave me a hard time so after the class was finished, I was done. I managed to get out of it when I studied nursing, but being a history major, it's required.

And I'm loving every minute of it!

Especially when I learn something that confirms God's greatness and the infallibility of His Word. That happened a few weeks ago when my professor talked on the subject of Ptoleny II and the Letter of Aristeas.

Ptoleny II or Ptoleny the Great was pharaoh of Egypt from 283 to 246  BC. It was during his reign that the city of Alexandria  became the hub of material and literary masterpieces. Ptoleny supported the growth of the Library of Alexandria as well as its museums.

It's said that during this time, Ptoleny became interested in the Jews, particularly their God. Being a polytheist or someone who worshiped multiple gods, the pharaoh was intrigued by their devotion and dependence to their God and His Laws. Because the Hebrew laws were written in Hebrew, he ordered his chief librarian to find a way to have them translated then placed in the Library of Alexandria. 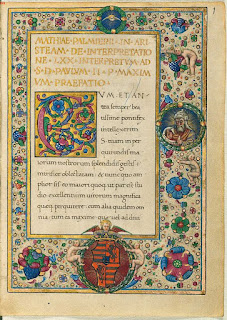 There has been much debate over the years as to how this happened, but one clue is a letter, written by Aristeas of Marmas to his brother, Philocrates. In it, Aristeas details the reasons behind the Greek translation of the Hebrew law as well as the process behind it. According to the letter, Ptoleny II urged his librarian to include Jewish history as well as their laws to the collection in the library. He also grants freedom to all the jews held captive by his predecessors and sends gifts to the Temple of Jerusalem with his envoys. The envoys' task is to find seventy-two men--six from each tribe--and escort them to Egypt to translate the Hebrew Law or the Septuagint. The high priests choses the six men from each tribe, blesses them, and they leave with the envoy for Alexandria.

When the men arrive, the pharaoh 'weeped tears for joy,' then spends the next week listening to their wisdom on philosophical questions. After the week of questioning, the men go to work. It was decided that each man would translate the Laws into Greek, then the group would convene and compare their work. For seventy-two days, the men worked on their own translation. When they reconvened, they were dumbstruck. Each translation--all seventy-two of them--were exactly the same. The pharaoh rewards them, and they return to Jerusalem.

This version has been disputed numerous times. Some say it's fictional, believing that the Greek version of the Hebrew law was translated by Jews in Alexandria in a prolonged process. Still, Aristeas's letter can't be completely written off as there are copies of it that have been passed down through the generations. As a Christian, I lend toward this interpretation because it shows God's sovereignty as well as the infallibility of the Bible.