SURVIVING IN THE OCEAN IN WWII A WWII military pilot flying over large bodies of water needed to be prepared to survive in the air, on land, and in the water, which required a lot of equipment. One thing that surprised me in my research was the amount of gear a pilot needed to wear and still fit into the cockpit of a fighter plane and other military aircraft. They, of course, had their A4 flight suit with some underclothing beneath it, B5 leather helmet, and A6 flying boots.

The last thing an airman wanted to do was abandon a plane far up in the sky, especially over water. When the circumstances required bailing out, the items worn were in the order the flight crew member would need them after bailing out. The first and most obvious piece of survival gear was a parachute. With the huge amount of silk fabric in the canopy of the chute, the canvas pack it is stored in, and the harness to strap it to a body, the whole kit and caboodle weighed in at roughly thirty-one pounds. The open canopy of the chute measured twenty-eight feet in diameter on the underside. It would slow the wearer from 120 mph down to 13 mph depending on various factors such as body weight and atmospheric conditions.

Once aloft over water, a pilot needed to time the releasing of his parachute precisely. Too soon, and he would drop into the water while his chute drifted away. Too late, and it could come down on top of him in the water, potentially pulling him under. There were two goals regarding the chute: first, to release it so as not to get tangled up in the bountiful fabric, and second, to still be able to salvage the chute. Why would the latter matter, you might wonder? It could be an excellent source of shade once inside the little one-man life raft or become a makeshift sail. 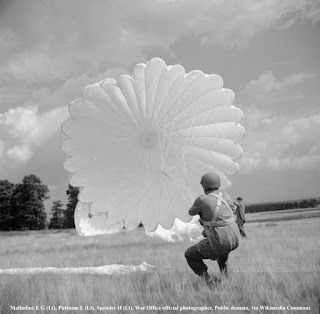 Underneath the parachute came the B-4 Mae West life vest. So named because, when inflated, it resembled the buxom actress, popular in the 1930s, 1940s, and into the 1950s. Once the pilot was in the water—chute off, but in tow—he would work the two CO2 canisters on his life vest, one to inflate each side. The Mae West was also equipped with a rubber hose to inflate it manually if necessary. 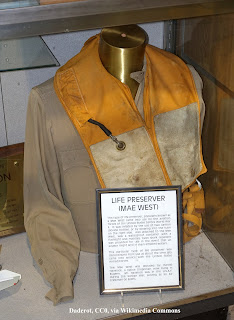 The next order of business was getting out of the water, which could be shark infested. The C1 survival vest was worn under the Mae West, but accessible, and contained—among other things—a life raft. All twelve square feet of it.

I found the following WWII military training video (titled Castaway) highly entertaining. It reminded me of my childhood, not in content but in style. People of a certain age and older might remember The Wonderful World of Disney wildlife shows with narration from a bygone era. The narration in this video reminds me of those.

WWII parachutes, survival gear, and persevering after ditching in the ocean were some of the myriad of topics I researched while writing Mrs. Witherspoon Goes To War. My heroine needed all of this survival gear, which is a lot of weight on my little 5’2” plucky WASP.

MARY DAVIS, bestselling, award-winning novelist, has over thirty titles in both historical and contemporary themes. Her latest release is THE DÉBUTANTE'S SECRET (Quilting Circle 4) THE DAMSEL’S INTENT (Quilting Circle 3) is a Selah Award Winner. Some of her other recent titles include; The Widow’s Plight, The Daughter's Predicament, “Zola’s Cross-Country Adventure” in The MISSAdventure Brides Collection , Prodigal Daughters Amish series, "Holly and Ivy" in A Bouquet of Brides Collection, and "Bygones" in Thimbles and Threads. She's an ACFW member and active in critique groups.
Mary lives in the Pacific Northwest with her husband of thirty-seven years and one cat. She has three adult children and three incredibly adorable grandchildren.