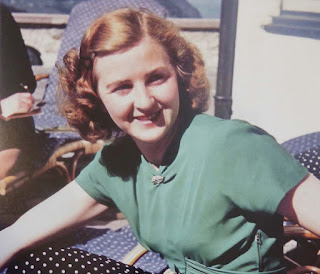 While Eva Braun is hardly a heroine, she is part of history. I’ve always been puzzled by this woman. Who was she? Did she espouse the views of the man she stood next to in life and in death? After finishing the book, Eva Braun: Life with Hitler by Heike B. Gortemaker, I have a clearer idea of what she did, but what she believed and valued are still mysteries. 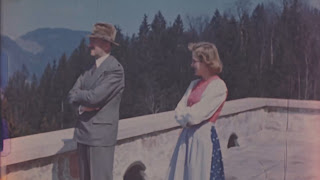 Eva was born into a middle-class family and attended Catholic school. After graduating she worked as a shop assistant for Heinrich Hoffmann in his photography store. Eva became adept at developing pictures and was rarely without her camera. She loved to make movies, and her films of her life at the Berghof, the chalet she and Hitler’s entourage stayed in near Salzburg, give us a peek at the führer in a less formal setting.

Eva met Hitler who was twenty-three years her senior when her boss, Hoffmann, became Hitler’s photographer. She joined his entourage as an assistant photographer and traveled in his circle. No one really knows whether their relationship was romantic or platonic. Hitler wanted the world to think he was single—in essence, married to the Nazi Party. 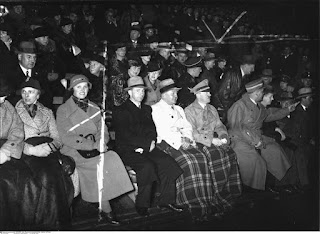 Twice Eva attempted suicide to get his attention, and after the second attempt, he became more considerate of her, but she rarely was seen in public with him, excepting the 1936 Winter Olympics where she sat behind him. 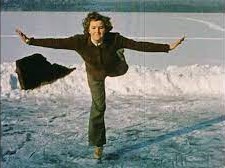 What else do we know about her? Eva was athletic and loved to skate and do gymnastics, whereas Hitler was not. She loved to travel, often taking trips to Italy with her sister. She was a decent hostess at the Berghof but felt uncomfortable with the other Nazi wives, perhaps because she wasn’t married. 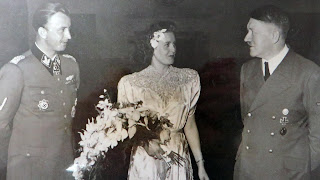 On the surface, she seemed like a normal young woman, yet Eva liked powerful men, and she remained true to Hitler for most of her adult life. Did she share his Nazi views? Most likely, Eva preferred not to know the details as long as it didn’t affect her life. But in the end, when it became clear that the Allies had won, she agreed to end her life alongside Hitler, with one condition—that he marry her before they died. Forty hours after the wedding ceremony, at the age of 33, she took a cyanide capsule and was found on the sofa next to her new husband.
So who was Eva Braun? An ambitious young lady whose goal in life was to be happy and marry an important man, and she’d do whatever it took to reach her goal.