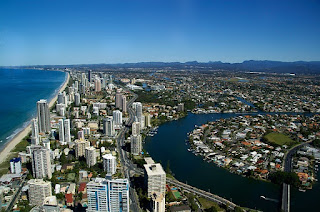 Have you been enjoying our virtual visits to the beautiful and historical canal cities of the world? If you missed last month’s trip to Tigre, Argentina, click here (https://www.hhhistory.com/2021/09/canal-city-tigre-argentina.html). Today, we’re going to make our way over sixteen thousand miles across the South Pacific Ocean to visit Gold Coast, Australia.
Despite its name, Gold Coast is a city located in the Australian state of Queensland, approximately forty miles south of the state capital of Brisbane. Originally named South Coast, Gold Coast is the ancestral home of a number of indigenous clans of the Yugambeh people, and Europeans didn’t arrive until 1823 when explorer John Oxley landed at Mermaid Beach.
The hinterland’s red cedar supply attracted people as timber-fellers made their way north along the

Pacific coast from Sydney and past Port Macquarie, putting the area into play with regional and global trade in native Australian timbers. Small townships developed along the coast and in the hinterland, and the west suburb of Nerang was established as a base for the industry. By 1870, a town reserved had been set aside. As the years passed, the area grew a reputation as a secluded holiday destination for wealthy Brisbane residents.
The American Civil War impacted the area because the conflict interrupted the South’s supply of raw materials for England’s textile industry. Local farmers and industrialists tried to plug the hold by experimenting with new kinds of crops. Ultimately, the experiment failed, but other crops took their places in a series of efforts to match the qualities of the land and climate with demand, even as timberland was being extracted. The successive effort gave rise to villages, forming the backbone of the city’s current structure.

Residential canals were first built in Gold Coast in the 1950s. Most are extensions of the Nerang River, but there are more to the south along Tallebudgera Creek and Currumbin Creek, and to the north along the Gold Coast Broadwater and Coomera River. Already the largest manmade canal network in the southern hemisphere, construction continues, adding to the 135 lakes and more than 400 kilometers of canals (over nine times the length of the Venice canals).
The Gold Coast Waterway Authority is the dedicated organization that ensures the canals, rivers, and lakes of this pristine area are developed and used in a manner to remain clean, safe, and accessible. It is no wonder Gold Coast is a major tourist destination for visitors from all over the world.
________________________________

Linda Shenton Matchett writes about ordinary people who did extraordinary things in days gone by. A volunteer docent and archivist for the Wright Museum of WWII, Linda is a former trustee for her local public library. She is a native of Baltimore, Maryland and was born a stone’s throw from Fort McHenry. Linda has lived in historic places all her life, and is now located in central New Hampshire where her favorite activities include exploring historic sites and immersing herself in the imaginary worlds created by other authors. Learn more about Linda and her books at http://www.LindaShentonMatchett.com.
A Family for Hazel:

Can a widowed preacher who must marry to keep his job and an alleged thief find true love?
After the Civil War takes Hazel Markham’s father, and her mother dies of a broken heart, a friend of her parents hires Hazel as a companion. All is well until the woman’s lecherous son takes an interest in his mother’s assistant. When Hazel spurns his advances one too many times, the man frames her for theft, and she is fired. As a last resort she applies to be a mail-order bride, and to her dismay, her groom-to-be is a preacher. Will he believe her claims of innocence or reject her as unacceptable?
Olav Kristensen has no plans to remarry after being widowed five years ago, but when the church elders give him an ultimatum to find a wife or lose his job, he advertises for a mail-order bride. The woman who arrives attests she was unjustly accused of robbery at her last job, but when his daughter’s heirloom locket goes missing, he is hesitant to believe his bride-to-be. Will he lose his church and a second chance at love?
Purchase Link: http://www.amazon.com/dp/B09GMP9C36
Posted by Linda Matchett at 12:30 AM