The Heydey of the Jekyll Island Club

My last couple of posts focused on how Georgia’s Jekyl [early spelling] Island Club came to flourish, with some of its elite Gilded Age and Edwardian members constructing amazing “cottages” around the Queen Anne clubhouse. Carefully landscaped lots, scented with jessamine, wisteria, Cherokee roses, and wild orange trees, bordered on the natural preserve. Under the forty-two-year oversight of Superintendent Ernest Grob starting in 1889, the club flourished.

In late December or early January of every year, an influx of immigrant workers poured through the coastal town of Brunswick, boarding the Jekyl Island steamer. The servants’ annex was constructed between 1888 and 1891, with a social hall added later. Soon after the servants arrived, the industrial barons and their families followed. Dues, originally a hundred dollars, raised to three hundred in 1901 and five hundred in 1910, the year five financiers met secretly on Jekyl to create the Federal Reserve. During a booming 1915 season, AT&T President Theodore Vail participated in the first public transcontinental telephone call from Jekyl, with William Rockefeller listening in.

The clubhouse served as the nucleus of island life. Cuisine reflected the island’s bounty—terrapin, venison, quail, turkey, oysters, shrimp, and fish, as well as vegetables from the club garden. In the early 1900s, a full-scale dairy thrived on Jekyl. Members dressed for dinner and gathered in the main parlor after, chatting and enjoying whist and billiards. The women eschewed the notion that they should confine themselves to their own parlor. The cottages did not have full kitchens, so the owners had to dine at the club or order meal delivery.

Most members focused on outdoor pursuits. The club required hunters to turn all game over to the club. Golf and tennis gradually edged out hunting. The golf course first saw action around 1899. In 1910, a new course replaced the old one, and the club hired a Canadian champion as its golf professional. Carriage and bicycle rides were also popular. The first automobile appeared on Jekyl in 1901. Rules limited the hours they could be driven and the speed to six miles per hour.

In the 1890s, the clubhouse underwent a renovation, enlarging the dining room and adding skylights as well as a barber shop and toilet room, and the Sans Souci apartments were constructed. William Rockefeller, J.P. Morgan, and many other notables rented rooms. In 1901, an annex expanded the clubhouse. For the 1903 season, the new electric plant transformed the island with sparkling lights.

The 1920s brought a golf course expansion and a swimming pool. Red bugs, a miniature motorized vehicle powered by gas or electricity, became popular. In 1926, the members organized a costume ball. Two weeks later, the island employees held their own. 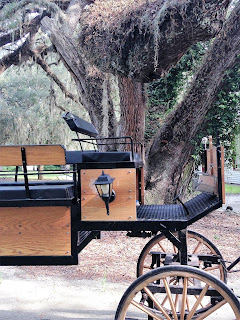 All the gaiety and grandeur, however, had an expiration date. By 1929, everything changed. My December post will reveal what caused the decline of the Jekyl Island Club.