Winnifred the Brave, and a very special Corona typewriter. 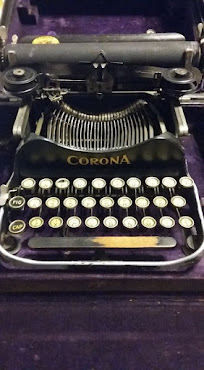 I barely knew her, Mrs. Winnifred H. But she was special to our family and she taught me a lot without ever knowing that she had any influence on me whatsoever. She passed away before I finished high school, and we inherited a few of her things.
By "a few" I mean three full stories of her belongings, plus the full basement, in an old Victorian home in Vancouver.
One of those "things" is her ancient portable Corona typewriter. It's in my new office with all my books, some important trinkets of my travels, and a room full of peace and quiet.
Another one of those things we inherited is the table upon which I'm typing on my sturdy HP laptop, which is 100 years of technology ahead of that old , gracious Corona. It's a 50 inch round, Empire Era Sapele (ribbon mahogany) dining table, with a thick centre post, and four smaller corner posts, and a footrest. It's a bit of a collector's item. I sent of photo of it to Antiques Roadshow US and they went a bit squirrely over it. I'm thrilled that the table that Winifred used as she hosted and fed people in her giant Victorian rooming house in Vancouver is now part of my storytelling career.Mrs. H started life in a small town in Ontario. Newboro, surprisingly enough, is mere miles from where our friends M&M live. I had no idea until I read one of the letters that came with the typewriter. I've kept these letters for years, but never read the ones from 1892, which were written in frail cursive. Let's just say that while I can read cursive, this letter was written on mourning paper, and describes the last days of a man who I think is Winnifred's father, but I'm not entirely sure. But the letters are still fascinating, and heartbreaking. 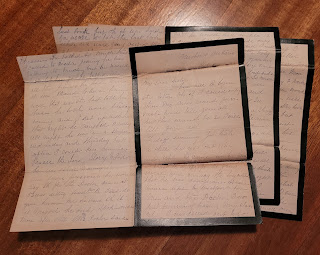 Anyway, so why do I call her Winnifred The Brave?
Well, the first hint is the typed letter was written in 1918.
Miss Winnie packed up a steamer trunk (yes, I have that, too), snuck out of Newboro, made it to Kingston, then made it to (I think) Montreal, jumped a ship, and sailed to Africa to become a missionary.
But wait, what was happening in 1918?
At the time, they called it "The War to end all wars".
Even though the Armistice would come that November, World War One was still ravaging the planet, and the shipping lanes were prime targets. But her calling was stronger than anything that could hold her back, including the very real possibility of going down with the ship during a sea battle.

When I read it, I had to try and keep it together. 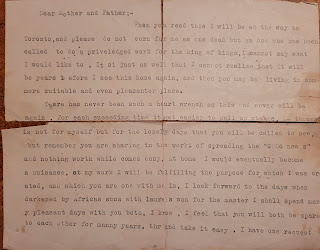 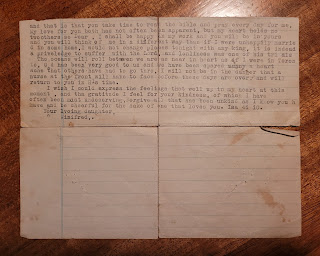 These letters were typed on "my" Corona, left in the house, and discovered by her parents after she'd snuck out in the middle of the night.
Can you imagine their emotions? Their daughter, who was probably less than 25 years old, had run away from home to cross the world and serve somewhere in Africa.
As you can see in the letter, she had a vague idea of what she was getting herself in for. But I doubt, with everything in me, that she had any idea of the life ahead of her.

Here's to you, Winnifred, for being braver than the doubt, stronger than the fear, and more faithful than the naysayers ever thought you were capable of.
~~~~~~~~~~~~~~~~~~~~~~~~
Jennifer Zarifeh Major is a direct descendent (on her mother's side)of Oman Norquay, who arrived from the Orkney Islands on ship to Hudson's Bay in 1830, and his Cree wife Mary. Her father is an Arab immigrant who grew up on a street named after a man who served with Lawrence of Arabia.
She writes historical fiction based on Navajo history. You can find her on Twitter under @Jjumping and on Instagram under Jennifermajorwriter, and at www.jennifermajorbooks.com. 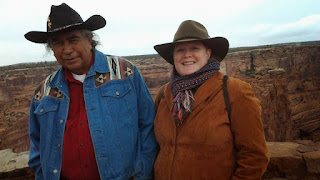 Jennifer and her friend, and trouble-making Navajo mentor, Theodore Charles (USMC retired, M.Ed Biola University) whose grandfather was a prisoner of the US Army at Bosque Redondo, at the age of seven.
Posted by Jennifer Major at 12:00 AM