Historic Bridges in America – with giveaway By Donna Schlachter

Mention historic bridges, and for many of us, our minds flash to the old covered bridges in the Midwest. And while many have survived, most were replaced by permanent stone structures after the wood rotted or the bridge succumbed to a flood or, worse yet, the ravages of war.

However, there are still plenty of old bridges in America, so let’s take a cross-country tour and check out a few. The list is by no means exhaustive. A bridge included here doesn’t make it more historically important than one not on it. This blog post simply highlights stories and styles of old bridges.

Constructed in 1804, the Union or Waterford Bridge was the first bridge built across the lower part of the Hudson River. It connected the towns of Waterford and Lansingburg. Burr combined a wooden arch with a truss to strengthen Union Bridge and provide stiffness. This was the first time this kind of building technique was used in the US, and Burr later patented his truss/arch pattern. The bridge is still in use. 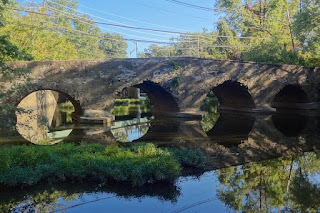 Kingston Bridge is the second oldest bridge in the county after the Old Stone Arch Bridge. The original wooden bridge was destroyed during the Revolutionary War and rebuilt as a stone arch structure in 1798 as part of the King’s Highway near Kingston, NJ. Although the bridge is more than 220 years old, it still retains its original roadway grade and is still being used today. 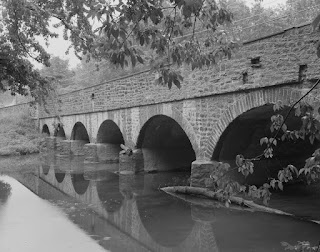 photo source: Wikimedia Commons via U.S. Library of Congress
Skippack Bridge is an eight-arch stone bridge built in 1792 in Lower Providence Township, PA, and is thought to be the oldest bridge in the United States that retained its original dimensions. Before the bridge was built, several attempts were made to build a bridge connecting the eastern and western parts of Montgomery County starting in 1762. Funkites, exiled Mennonites who supported the Revolutionary War, sought religious and political refuge in this area. It is still in use today. 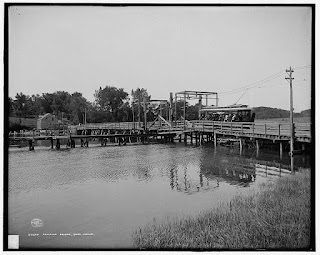 Sewall’s Bridge in York, Maine is one of the oldest wooden bridges in America, and it is the earliest wooden pile-trestle bridges that has an authentic construction record and builder’s drawings still in existence in America. The original was in use for 173 years, before being replaced in 1934 by a modern wooden pile bridge, and is still in use today. 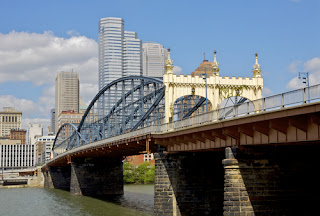 Smithfield-Street-Bridge.jpeg
The Smithfield Street Bridge is Pittsburgh’s oldest bridge in a city dubbed “City of Bridges”. The iconic lenticular truss bridge officially opened on March 19, 1883, and is the second-oldest steel bridge in the United States. 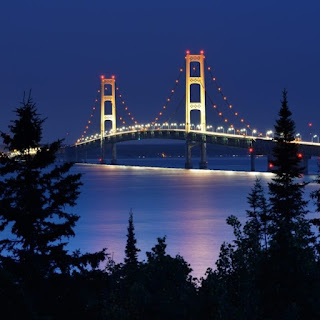 Photo John McCormick / Shutterstock
Mackinac Bridge, dubbed the “Mighty Mac,” spans the confluence of Lake Michigan and Lake Huron. This suspension bridge is newer than the others in this post, but still more than 60 years old. Five miles of swaying deck carry drivers over the swirling Straits of Mackinac. First opened in 1957, the bridge offered travelers an alternative to the existing ferry. On a windy day, the bridge can shift more than 30 feet side to side. For a good look at the bridge in real time, check out the official bridge cam.


Beautiful bridges come in all styles, shapes, and sizes. Constructed of stone, wood, or cast iron, these relics of the past call us to adventure. Check out these and other historic bridges, and make plans to stop along the way to learn their histories and their stories.

Giveway: While there are no physical bridges mentioned in Justice for Julia, there are emotional spans to cross. Leave a comment to be entered into a random drawing for a print (US only) or ebook copy.

About Justice for Julia: 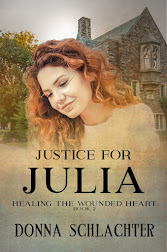 A woman doctor in 1868 is wrongly accused of medical malpractice, and she flees into rural Iowa in search of a new start. A loving father snatches his daughter from her abusive mother, and heads west, hoping to keep her safe and him out of the clutches of the law. Can they really begin a new life? Or will they be forced to return to the  bad situations they both escaped from?
https://www.amazon.com/dp/B09H9RFQX1 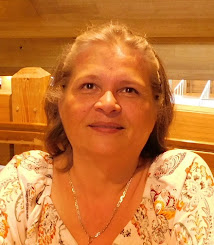 Donna writes historical suspense under her own name, and contemporary suspense under her alter ego of Leeann Betts, and has been published almost 50 times in novellas, full-length novels, and non-fiction books. She is a member of several writing communities; facilitates a critique group; teaches writing classes; ghostwrites; edits; blogs regularly; and judges in writing contests.