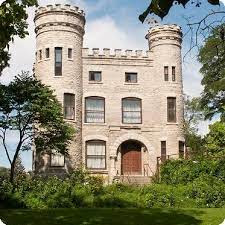 Did you know that there is a castle in Chicago? I didn’t until recently, and I’ve lived in the greater Chicago area since 1977.
I recently stumbled on an article about this unique building that has been a part of the Chicago landscape since 1887, when Robert C. Givins, an imaginative real estate developer, dreamed of building a castle in Chicago that was styled after the Irish castles he'd viewed on his visits to Ireland. It's been said that he was also inspired by the design of the famous Chicago Water Tower, the only structure that remained intact after the Great Chicago Fire of 1871.
Givins located the perfect spot for his dream castle in the Beverly neighborhood. Back then the land was very rural, unlike today, and it offered him a respite from the hustle and bustle of the downtown area.

Givins and his wife lived there off and on until 1908 when they rented the building out to a girls’ finishing school for a year or so. After that, the property was occupied over the decades by a total of three other "castle keepers"
After the women’s college left, Givins sold the castle to John B. Burdett, a manufacturer, and his wife Jessie. They lived there from 1909-1921. During that time, Mrs. Burdett got busy and arranged to have electricity installed and the heating system upgraded. She also added a porte-cochere on the north side of the building, a covered porch that allows for vehicles to drive through to drop off passengers. Something, I'm sure was appreciated during the cold winds and snow of Chicago winters.

In 1921, the Burdetts sold the castle to Dr. Miroslaw Siemens, a prominent physician, and his wife Bonnie. Dr. Siemens founded the Ukrainian National Museum and was committee head of the group involved with the development of the Ukrainian Pavillion at the 1933-34 Chicago World’s Fair. The Siemens family occupied the castle until 1942, when the Beverly Unitarian Fellowship purchased it and began holding church services there. Now called Beverly Unitarian Church, they remain its current owners.
Several years ago, during an inspection of the antique structure, it was discovered that the castle was in dire need of repairs. As a temporary fix, the parts that were most weakened were shored up, but more extensive work was required, including the rebuilding of one of the towers. Dubbed the Castle Restoration Project, the owners began a capital campaign to cover the repair costs. which has been estimated at about a million dollars. Church members have donated to the project and grants have been obtained, but the goal has not yet been achieved.
If you want to learn more about the castle you can find a myriad of articles through Google. Also, Chicago's Only Castle: The History of Givins' Irish Castle and Its Keepers is available for purchase through Amazon. 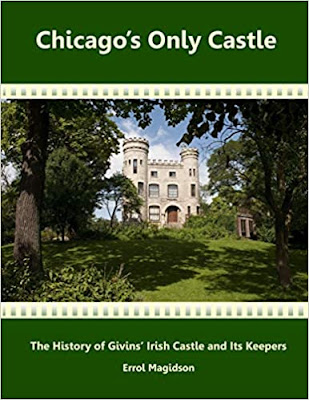 The castle is recognized by the Chicago Landmarks Commission as part of the Longwood Drive District and is also part of the Ridge Historic District, listed in the National Register of Historic Places (National Park Service, U.S. Department of the Interior. You can read more about this fascinating building by using Google or your favorite search engine, to search online.
Did you know about this castle, or have you visited it?
Resources and Sources of Photographs:
https://chicagosonlycastle.org/
https://drloihjournal.blogspot.com/2016/11/chicagos-only-castle-history-of-givins.html
https://www.beverlyunitarian.org/castle-more-century-history
Photo of the rural property: Digital Research Library of IL
Photo of the castle in winter with portico: Beverly Review.Net
Photo with scaffolding: Chicago's Only Castle.org

Pam Meyers lives in northeastern Illinois with her two rescue cats. When she's not nosing around in her native Lake Geneva, Wisconsin area for new story ideas you can find her busy volunteering at her church.
After all the years of living in other states, she still considers herself a Wisconsin girl who happens to live in Illinois
Looking for the perfect Christmas gift for your reader friends who like historical romances set in picturesque places? Check out Pam's Newport of the West series. All are available at Amazon and at select shops in the Lake Geneva, Wisconsin area.