This is one of the most beloved carols of all time. Over 200 years old, the song is sung by congregations on Christmas Eve all over the world. It all began in a small town in Austria when a young priest by the name of Joseph Mohr was put in charge of the Christmas program at St. Nicholas church in Oberndorf.

He worked hard on the program and chose the most loved carols of the time for that night. Mohr gave every spare moment of his time to plan the elaborate service. 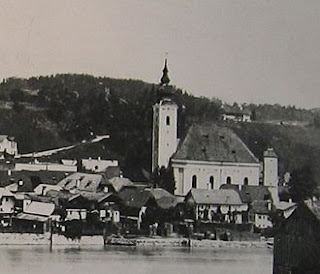 He imagined the grand sound in the church with the organ playing to great crescendos of music. However, circumstances kept getting in his way. The weather did not cooperate, the coldest weather in the town's history hit the economy, and members could not get to choir practice because of the ice.

On Christmas Eve, Mohr went to the church to make sure everything would be read. When he tested the organ, it remained silent. Nothing he did would bring it to life. He rushed from the church to home of his friend Franz Gruber who had once studied organ. However, Gruber had no luck in getting the organ to work, but he offered to play his guitar and accompany the music, but it had to simple works and not the elaborate cantata Mohr had planned. As they leafed through the music, Mohr remembered a poem he had written one cold night in the town of Mariapfarr as he stood on a hill overlooking the peaceful, snow covered village. The majestic silence of the night and the Christmas card scene below inspired him to write of the birth of Jesus and the words flowed from his heart.

Mohr raced home, found the poem and returned to the church. He gave it to Gruber who composed music for his guitar to play the song. The small church loved the song.

Franz Gruber: composer of the music for Silent Night 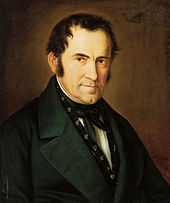 Mohr raced home, found the poem and returned to the church. He gave it to Gruber who composed music for his guitar to play the song. The small church loved the song.

Weeks later, the organ repair man, Karl Mauracher came to the church. Mohr told him about the Christmas Eve mishap with the organ and how they had used the guitar instead. Mohr then sang the song for Mauracher who was captivated by it. He jotted down the words, learned the melody, and then taught it to choirs all over Europe. Within ten years, thousands of choirs sang the song at Christmas.

Two well-known families of singers, the Rainers, and the Strassers heard and were captivated by it as well. Both groups added the new song to their Christmas repertoires, and the Strasser sisters sang it across Europe.

This a copy of an early piece of the music. 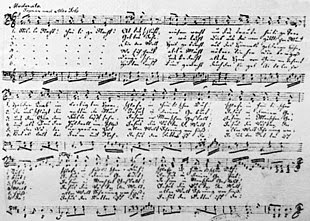 In 1834, after hearing the carol sung by the Strasser sisters, King Frederick William IV of Prussia liked it so much that he ordered it to be sung by the choir at his cathedral every Christmas Eve.

Twenty years after song was written, it came to the United States with the Rainers who sang it in German at New York City's Trinity Church.

By 1863 it had been translated in English, and in 1871 made its way into print in Charles Hutchins' Sunday School Hymnal. Today, the beautiful carol is sung around the world in more than 300 different languages. 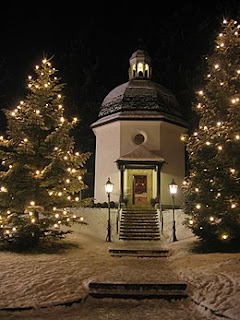 damaged by a flood in 1899. Because of the wide spread damage in the town, leaders decided to move the  town further away from the river.

The chapel was demolished, but a cone shape made of debris is on the site today.

In 1924, the construction of a memorial chapel proceeded slowly because of difficult political and economic conditions of Austria at the time. The chapel was finally completed on August 15, 1937.

Every year at Christmas, thousands of people from around the world visit the chapel and museum. At 5:00 P.M. every Christmas Eve, a memorial mass is held at the church and guests hear the beloved carol in their language. Since 2002, the event is transmitted by means of a local webcam on the internet.

When I was in Salzburg, Austria on a church choir concert tour, we were only 10 miles away from the town. Our busy schedule did not give time for us to visit, and I've regretted that to this day. Now that I've learned more of the history, I'll think of Salzburg and the little chapel every time we sing the carol at our church's Christmas Eve candlelight service.

Do you have a favorite Christmas carol? This one is mine.

Two years ago I wrote a Christmas story that was based on the Faith Center of our church. The center has a special Christmas event called the "Christmas Store" every year. In the book it became a party with Santa for the families who come to the center. 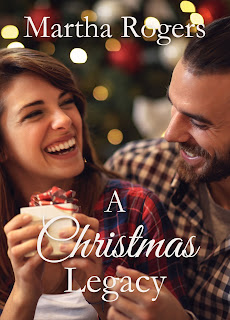 Before Garrison Cole can access his inheritance from his grandmother, he must fulfill the stipulations of her will and use thousands of dollars she set aside to make Christmas special for Hope Center of her church and the children's hospital. Along the way he must work with Kelly Graves who only remembers him as the rich jerk back in high school who made fun of those who weren't in the elite circle. Can Christmas provide the magic for them both to discover true love.