Last month I wrote about the well-known history of the Volkswagen Beetle, my little dream car. Today I want to share the story of one of the engineers who was instrumental in the development of Hitler's "People's Car" yet received no credit.

To recap: In 1930s Germany, Hitler was in power. Proud of Germany's new highways system, he wanted every German to have access to an economical car. Ferdinand Porsche and Hitler had become chummy so it wasn't a surprise when Porsche was given the task to design what would eventually become the Volkswagen Beetle, or VW Bug. As I said in my post last month, the VW Bug went on to become the fourth highest-selling vehicle of all time.

Yet that isn't the whole story. Let me tell you about a Jewish engineer named Josef Ganz.

Josef Ganz was born in 1898 to a Jewish family living in Budapest. In 1916, his family moved to Germany and became German citizens. Josef even joined the military and fought for Germany in World War I. From an early age, Josef was fascinated with technology. After the war ended, he studied mechanical engineering, and it was during those years of study that he dreamed of designing a small car that would sell for the price of a motorcycle. Ganz made many sketches of small, light-weight cars, but he had no money to build a prototype. Instead, he wrote about them in articles that were published in automobile magazines.

Because of his prolific and fascinating writings, shortly after his graduation in 1927, he was hired as the new editor-in-chief of Klein Motor Sport. Ganz continued to be critical of heavy, unsafe and old-fashioned cars and promote innovative design and his concept of a car for Germany's general population. Interestingly, one notable contributor to the magazine was Béla Barényi, a young engineering student who designed cars with a similar concept. In 1953, Mr. Barényi proved in court that his original designs and ideas had been used by Porsche to develop the VW Bug and he is now sited as one of the early engineers of the famous car.
Mr. Ganz, however, was not so fortunate.
Things went well for Josef at first. In 1930, he collaborated with motorcycle manufacturers Zündapp, Ardie and DKW on a prototype of his idea. That prototype was followed by a second, the Maikäfer, in 1931. News about their success spread and Ganz was hired as a consultant engineer at Daimler-Benz and BMW where he was involved in the development of the first models with independent wheel suspension.
In the summer of 1932, director Wilhelm Gutbrod of the Standard Fahrzeugfabrik in Ludwigsburg approached Ganz to discuss the possibility of developing a small ‘Volkswagen’ or People's Car, based on his 1931 Maikäfer prototype and his various patents. An agreement was soon reached and a first prototype was constructed and tested in the fall of 1932. Although Hitler expressed an interest in the car after seeing it at a car show, his anti-Semitic views were gaining ground. Hiring a Jewish engineer to design the people's car was out of the question. Ferdinand Porsche was soon charged with developing what we know as the Volkswagen Beetle. However, much of what would go into the Volkswagen was either patented by Ganz or heavily advocated for in his magazine.
What happened to Ganz, you ask?
In 1933 he was arrested by the Gestapo on false charges of blackmail. He fled Germany and settled in Switzerland. There he worked on the Swiss auto project similar to what Porsche was working on in Germany, but Hitler's war on the world once again put Ganz in danger. Even the Swiss government turned on him and claimed his work as their own. After the war, Ganz battled the government in court for five years with little to show for the effort. He moved to France and worked on a new car, but it couldn't compete with Volkswagen. He finally settled in Australia where he worked for General Motors. In 1965 Germany attempted to honor him and sought Australian Government permission to bestow on him the Officer's Cross of the Order of Merit of the Federal Republic of Germany. However, under regulations existing at that time in relation to foreign awards to Australian citizens, the request was sadly denied.
Josef Ganz died in 1967 in relative obscurity after suffering multiple heart attacks. Only recently has he been rightfully acknowledged for his early designs used to build one of the most iconic cars in history.

Michelle Shocklee is the author of several historical novels and is a Christy Awards and Selah Awards finalist. Her work has been included in numerous Chicken Soup for the Soul books, magazines, and blogs. Married to her college sweetheart and the mother of two grown sons, she makes her home in Tennessee, not far from the historical sites she writes about. Visit her online at www.MichelleShocklee.com
UNDER THE TULIP TREE
*2021 Christy Awards Finalist* 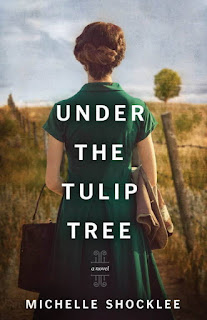 Sixteen-year-old Lorena Leland’s dreams of a rich and fulfilling life as a writer are dashed when the stock market crashes in 1929. Seven years into the Great Depression, Rena accepts a position interviewing former slaves for the Federal Writers’ Project. There, she meets Frankie Washington, a 101-year-old woman whose honest yet tragic past captivates Rena. Frankie’s story challenges Rena’s preconceptions about slavery, but it also connects the two women whose lives are otherwise separated by age, race, and circumstances. Will this bond of respect, admiration, and friendship be broken by a revelation neither woman sees coming?
For purchase options, visit www.MichelleShocklee.com
Posted by Michelle Shocklee at 1:00 AM