The best little Creamery around. 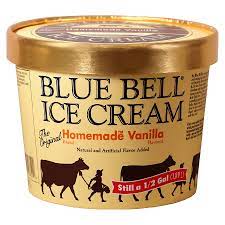 Up a little north of Houston in Brenham, Texas on Highway 290, sits a creamery know for its ice cream that comes in some of the best flavors you could ever want. Many states are now familiar with the iconic symbol of Blue Bell Creamery.

Very few people exist who don't like ice cream. Those of us who do like the best with our favorite flavors from Homemade Vanilla to Cookies and Cream, and all kinds of chocolate.

It all began back in the early days of the century when the Brenham Creamery opened in 1907 to purchase extra cream to make butter for the people of Brenham. In 1911 they began to use the cream to also make small quantities of ice cream.

Eight years later, in 1919, the company came upon hard times and considered closing. The board of directors wanted to keep it open and hired a former school teacher, E.F. Kruse to take over the company. Though only 23 years of age, he would have a profound effect on the company. After he took over on April 1, 1919, he refused to accept a salary for the first few months in order to keep from placing the creamery in further debt. The picture shows some of the early workers and the packaging for the ice cream. 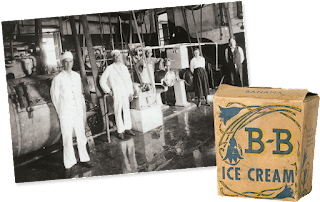 Under his leadership, production of ice cream expanded to the area surrounding the town and soon began making a profit. Krause is the one who suggested the name change to Blue Bell Creameries in 1930. The name came from the state flower Bluebonnet, a wildflower seen all over Texas every spring and especially around the town of Brenham.
In 1936 the creamery went from making ice cream by the batch with a 10 gallon batch every 20 minutes. Then they purchased the first continuous ice cream freezer. The new freezer made 80 US gallons of ice cream every hour. The frozen cream ran through a spigot which allowed it to be poured into any size container.
Then in 1951, Krause was diagnosed with cancer and died within eight weeks. His sons, Ed and Howard, took over the leadership and soon began expansion to other parts of the state.
By 1960, they no longer made butter, instead they concentrated on ice cream only. The company expanded throughout Texas including Houston and other large cities. By the end of 1970, sales had quadrupled and by 1980, they produced over 10 million gallons of ice cream per year.
Then the company expanded to Oklahoma and then throughout the South Central and Southern United States. They even built a plant in Broken Arrow, Oklahoma in 1992 and a third one in Sylacauga, Alabama in 1996. It seems that once a creamery is established within a marker, word-of-mouth ensures more sales.
In order to expand like it did, Blue Bell thoroughly researched new market to make sure that all employees in new markets would be fully trained in Blue Bell practices in order to uphold the product quality expected of the company. 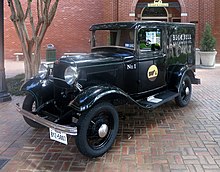 In the early days, deliveries were made by small trucks outfitted to keep the ice cream frozen.
Today, semis can be seen on the highways
taking Blue Bell all over the country. One of
their slogans is they sell all they can and eat the rest. 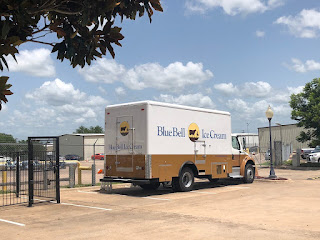 Tours of the creamery in Brenham are available, and they have a country store on the premises. Here is a picture of that creamery and a sign directing people to the tour. I have been on that tour, and all I can say is that at the end, I had my fill of ice cream, but still bought more to take home. 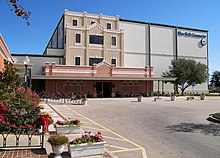 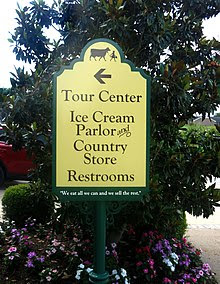 I would be remiss if I didn't mention the problems and recalls in 2015. The recalls eventually shut down production and resulted in job cuts and furloughs. Because of a contamination by Listeria, they shut down and began a cleanup procedure that followed federal and state guidelines. After three months, the company began production on a limited basis and returned its products to freezers in Texas and Alabama. They were part of a five-phase plan to get back to full production which they ultimately accomplished.

In front of the creamery stands a statue depicting icon seen on all cartons, trucks and signs advertising Blue Bell. 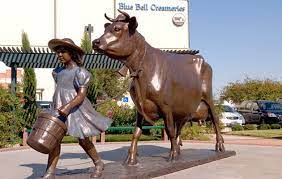 Children love having their pictures made by the statue, and they are even allowed to climb up on the cow's back for pictures. A lot of children with smiling faces on school tours fill the area every year.

Wouldn't a bowl of your favorite ice cream taste good about now? 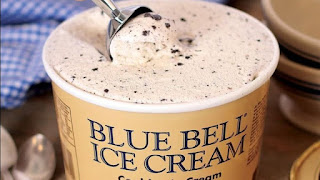 What's your favorite flavor of ice cream? I'll take anything with chocolate in it.😊 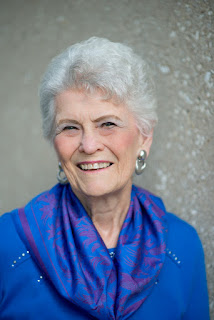 Martha Rogers is a multi-published best-selling author of over sixty novels and novellas. She is a member of ACFW, CAN, and AWSA. Martha teaches a Sunday Bible class for senior women and is a retired English and Home Ec. Teacher. She lives in Houston with Rex, her husband of 62 years.