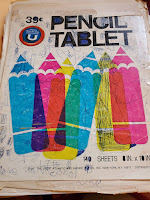 I am fortunate that my parents knew to channel my active imagination into writing. When I was about seven or eight years old, they gave me a notebook (pictured on left) and a package of pens and told me to "go to town." I made up lots of stories but also tried my hand at poems. The periodic journal from our regular trips to see my grandparents made it into the pages too. At one point, I even started a family newspaper, but that only lasted for a few editions. Nestled toward the back of the notebook is "Sandy, the Toy Elephant" written under the pen name Miranda Gray.

Other titles include "Mary Todd Lincoln - A Biography," "Jamie's Toy Car," "What Happened When the Centipede Gave the Puppet Show," "Old Stone Wall," and "The Hedgehog and the Zebra." None of them best-selling material, I assure you.

My love of history was ignited during my honeymoon. I'd taken some history courses in college as electives, but the professors were more interested in the memorization of dates, names, and places, so I thought the subject dry and boring. We married in Maryland, then set off for a whirlwind tour of Philadelphia, Lancaster, Gettysburg, Harper's Ferry, and Manassas where we met reenactors and museum docents who were passionate about presenting the stories of history. I "met" people such as John and Abigail Adams and Benjamin Franklin and saw the world through their eyes.

When we settled in the Northern Virginia area, I immersed myself in the Civil War and post-Civil War era visiting museums and historic sites on a regular basis, dragging my long-suffering husband along for the ride. There are intriguing tales about famous folks, but I loved learning the little-known stories of "everyday people." 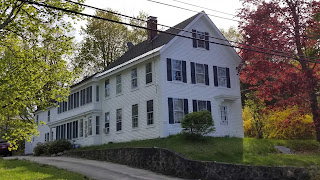 Fast forward to 2002 when we moved from the Washington, DC area to purchase and operate a bed and breakfast in New Hampshire. I was thrilled to discover that my tiny village in northern New England is home to five museums, one of which is the Wright Museum of WWII. You can't miss it - there's a Stuart tank emerging from the front of the building. Once again, enthusiastic volunteers immersed me in another time period as they shared information and explained exhibits about the men, women, and children who lived during this difficult period. Shortly thereafter, I signed up to be a docent. About five years ago, I was given the opportunity to work as a volunteer archivist, and last year helped curate an exhibit.

For several years, I did freelance work for several travel and lifestyle magazines, mostly writing pieces about historical places and people in New Hampshire, but I eventually realized my first love was fiction - historical fiction, of course, so I set out to write the "Great American Novel." My first manuscript was terrible, but I received excellent feedback from the acquisitions editor at the company where I'd submitted the manuscript, so I was able to take steps to improve. Five years later, Love's Harvest, a retelling of the biblical story of Ruth set during WWII was published as part of a collection of stories.

Writing brings me great joy, and my goal is to provide an escape from everyday life with encouraging and edifying stories about ordinary people who do extraordinary things in days gone by. My 28th and 29th books will be out in February and March respectively.

I'm currently working on a series that will be published in the late summer and early fall about four siblings whose lives are turned upside down by the death of their father and the discovery that he left them deep in debt, forcing them to make decisions that go against everything they believe.

If you love history as much as I do, consider following my blog, YouTube Channel, Facebook page, or Pinterest page. You can also join my semi-monthly newsletter.

Tegan Llewellyn has always been different than her adopted family, except Grandmother Hannah, a prospector during the 1829 Georgia gold rush. Now, seventy years later there are reports of gold in Nome, and the opportunity is too good to pass up. But Tegan doesn’t count on the dangers that strike from the moment she steps off the steamer, including the threat of losing her heart.

Elijah Hunter has prospected for gold all over the US and Canada and likes being on the move. The last thing he expects to find on his latest search is a lady miner who proves to be nothing but trouble. Can he convince her that leaving is for her own good before it’s too late...for both of them?

Linda Shenton Matchett writes about ordinary people who did extraordinary things in days gone by. Avolunteer docent and archivist for the Wright Museum of WWII, Linda is a former trustee for her local public library. She is a native of Baltimore, Maryland and was born a stone’s throw from Fort McHenry. Linda has lived in historic places all her life, and is now located in central New Hampshire where her favorite activities include exploring historic sites and immersing herself in the imaginary worlds created by other authors.
Posted by Linda Matchett at 12:30 AM