History of One-Room Schools in Canada

It’s hard to imagine that less than 200 years ago, education was only for the rich. It was during the 1840s that a Methodist preacher and editor by the name of Egerton Ryerson was appointed superintendent of schools for Upper Canada, introducing the public school system that was to be free, universal, and supported by taxation in order to be open to all. He insisted that education should have a religious foundation and include studies in grammar, geography, science, arithmetic, music, drawing, history, civics, nature study, physical training, and hygiene.

The idea was met with controversy. Not everyone valued education. Those without school-aged children balked at the idea of having to share in the cost. Others saw education as a waste, especially for girls. (I, for one, am truly grateful that clearer heads prevailed!)

Townships were divided into school sections. Each section would be led by elected trustees and have its own building and teacher. Attendance would be compulsory for children aged six through fourteen. Typically, a farmer would donate or sell a corner of his field for the school. A log shanty might be constructed, depending on resources. Some schools were built of brick and stone. In some remote areas of northern Ontario, train cars were used. By 1917, so many schools were going up as the west became populated that the Eaton’s catalogue offered a school kit in three different sizes. It included lumber, nails, hardware, insulation, and paint. The largest kit sold for $829.00.

Each district was charged with naming itself, and residents proved themselves creative. Near Ogden, east of Calgary, most citizens were employed by the Canadian Pacific Railway and wished to name their school after their employer. When they learned it would be illegal to use the CPR name, the chose to call their district “Cepeear,” pronounced exactly the same.

Although many Canadians over sixty once attended a one-room school, few today can imagine how a teacher could handle up to eight grades at once or how any learning was accomplished. My own parents are both products of these schools, and all four of my older siblings attended one as well. By the time I was old enough, the kids in our district were being bused to town. I did, however, have a four-day career as a one-room school student. With kindergarten still unheard of and a February birthday, I would be approaching age seven by the time I was eligible to start Grade One. My parents arranged with the teacher of a still-running country school for me to start a year early. Since several of the other students were cousins of mine, I did just fine. When the trustees got wind of it, however, they put an end to it. Rules are rules and I had to wait a year before starting in the town school. That experience gave me just a taste of country school. What I remember best and appreciate the most is how the older children watched out for us little ones and everybody played together. With so few students, they had little choice, but it was something I never witnessed again. 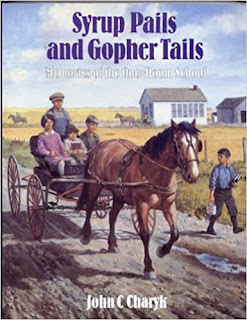 In Syrup Pails and Gopher Tails: Memories of the One-Room School, John C. Charyk shared his colorful experiences as both a student and a teacher. Students shared tasks such as hauling drinking water (in the early years this might mean carrying full pails from a river a quarter of a mile away, or hauling in ice blocks from the icehouse where they were packed in straw and letting them melt inside, then straining out any debris.) For those who rode horses to school, stabling the horse and meeting its needs were also a part of their school day. 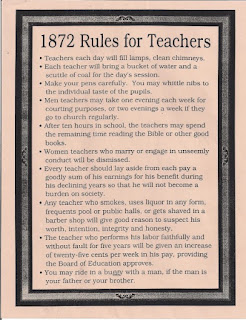 Teachers, some as young as eighteen, might have had only one year of training before being taxed with such an enormous responsibility. They had to serve not only as teacher of all subjects for all grades, but also as principal, school nurse, playground supervisor, Christmas concert organizer, office staff, and athletic coach. They often had to keep the stove going in winter, shovel snow, and more.

Covid-19 has certainly changed the contemporary classroom experience for students and teachers alike. I recently saw a chart showing the last year your child experienced a regular school year. If they are currently in Grade 7, their last “normal” year was Grade 4. Though the pandemic has brought incredible challenges to educators and students alike, the one-room school proved that people can do hard things. Despite the many distractions, most students did receive an education. Some, like John Charyk, went on to become brilliant authors who recorded for future generations what life was like in a one-room school.

A main character in Terrie Todd’s award-winning debut novel becomes a teacher at a one-room school in the 1940s. You can read about it in The Silver Suitcase. Terrie’s also the author of Maggie’s War, Bleak Landing, Rose Among Thornes, and The Last Piece. Terrie is represented by Mary DeMuth of Books & Such Literary Agency. She lives with her husband, Jon, in Portage la Prairie, Manitoba, Canada where they raised their three children and where her novels are set. They are grandparents to five boys.