Perfect Preparation for the Future

"If I straighten the pictures on the walls of your home, I am committing no sin, am I? But suppose that your house were afire, and I still went calmly about straightening pictures, what would you say? Would you think me merely stupid or very wicked? . . . The world today is on fire. What are you doing to extinguish the fire?"   Corrie ten Boom, Amazing Love

Corrie ten Boom lived in Haarlem, Holland. For generations, the ten Boom's were well-recognized watchmakers. Little did this contented spinster dream God would beckon her during her senior years into a worldwide ministry—speaking to sixty-four countries for over thirty years. 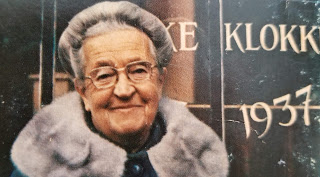 Most Christians have heard of Corrie ten Boom. The sweet elderly woman who spoke of God's redeeming love and forgiveness—even for her German captors. She was more! She and her family were stout-hearted warriors. As fearless as Joshua battling the Amorites, as bold was Daniel in the lion's den and just as prophetic.

In the Preface of The Hiding Place, (July 1971) John and Elizabeth Sherrill write:

"…we had the extraordinary feeling that we were not looking into the past but into the future. As though these people and places were speaking to us not about things that had already happened but about the world that lay ahead of us…we found ourselves actually putting into practice how-to's we learned from her about: Handling separation, getting along with less, security in the midst of insecurity, forgiveness, how God can use weakness, facing death, dealing with difficult people, how to love your enemies, what to do when evil wins." 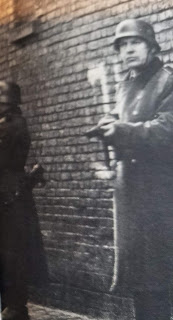 John and Elizabeth told Corrie of the practicalness of everything she recalled, "But," she replied, "this is what the past is for! Every experience God gives us, every person He puts in our lives is the perfect preparation for the future that only He can see."

Corrie, in her fifties, was arrested and went to Ravensbruck Concentration Camp. She and her family were imprisoned by the Nazis during World War II because they chose to obey God and disobeyed the ruling government. They became a part of the Dutch Underground Resistance and oversaw a network that smuggled Jews to a safe place. It is estimated that they saved around 800 lives.

As early as 1927 Corrie's older brother, Willem, who was at the time studying to become a minister of the Dutch Reform Church, wrote his doctoral thesis, on Germany, "that a terrible evil was taking root in that land…seeds were being planted of a contempt for human life such as the world had never seen. The few who had read his paper had laughed." The Hiding Place 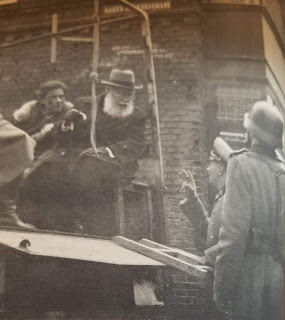 By 1937, it was clear to the world what Germany desired. Most of the Dutch people were not alarmed. The queen would keep them neutral, as Holland had been during the Great War (World War I).

Many merchants did business with Germany, their stock came from Germany. And a war would put them out of business. People like Willem warned that the war was Holland's tragedy too. Saying in one of his sermons, "Europe and the world were changing, no matter which side won, a way of life was gone forever."

So, the neighbor to the east of Holland, geared up for war. The ten Booms oftentimes heard a voice coming over their radio from German, screaming. Soon letters to Jewish suppliers in Germany came back, "Address Unknown". Then came the invasion of Holland. The queen fled and German tanks roared down Haarlem's narrow streets. Curfews were enacted and strictly adhered to. Radios confiscated; telephones disconnected. Identity cards were issued to each citizen. These were small folders that had your photo and fingerprints and you kept them hanging around your neck, sort of like a noose. Newspapers no longer carried news, and ration cards were issued.

The ten Booms kept their big, more powerful radio, hiding it. Corrie lied to the Germans, when she handed in their portable radio, saying that was all the ten Booms owned. The first year of occupation wasn't bad, an occasional rock thrown at a Jewish shop, hate words written across their storefronts, only minor attacks.

Corrie writes in The Hiding Place, "It was as though they were trying us, testing the temper of the country. How many Dutchmen would go along with them? And the answer, to our shame, was many. The National Socialist Bond…grew larger and bolder." Those who joined received more ration cards, the best jobs, and housing. Soon signs popped up in shop windows, Jews will not be served. Synagogues were burned. The fire trucks would come—but only to keep the flames from spreading! Then the bright stars appeared on Jewish coats. And then the disappearances. "I pity the poor Germans, Corrie—" her father said, "'They have touched the apple of God's eye.'" 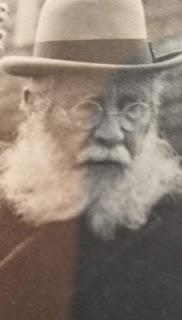 So, what did the ten Booms do? Lock their doors and cover their windows against the awful truth? It was a bone-chilling November morning in 1941, a year and a half after the invasion, when they asked Willem about his connections with farms in rural areas where he sent his Jews because there were few German troops there. The ten Booms knew there was an underground in Holland—who else could be behind the sabotage? A train carrying political prisoners stopped and seven, or seventeen, or seventy had somehow escaped? Corrie explains in The Hiding Place that rumors abounded, and always featured things Christians believed wrong in God's sight—stealing, lying, murder. Was this what God wanted? When evil ruled—how should a Christian act?

By May 10, 1942, the occupation grew harsher, restrictions numerous. Only police and Gestapo drove cars, and Jews no longer got ration cards. Christian clerks, postmen, doctors, nurses, all did their part in saving the Jews. The underground was growing. With the help of architects, the ten Booms house became a haven for the oppressed. They built false walls. Carting in bricks, mortar, paint to build a secret room to hide God's Jews during the raids—all carried into the house piece by piece in a briefcase, a folded newspaper, even the case of an old grandfather's clock! 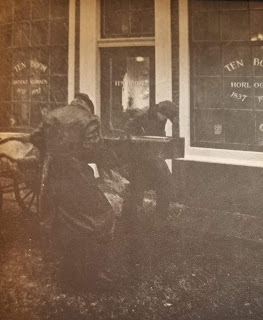 Corrie drilled her expanding household, and drilled again, with rigid precision for the unexpected. First to know, would sound the buzzer if the always-vindictive Gestapo should bust in.

Not every Christian jumped to the challenge of risking their lives. To this, the finest watch repairman in Holland who often forgot to send a bill for his services, told Corrie, "Just because a mouse lives in the cookie jar, doesn't make him a cookie."

These were awful times. Corrie was frightened—what if they were caught? Death haunted her heels, and if anything should happen to her father, what would they do?

"When you and I go to Amsterdam, when do I give you your ticket?"

"Just before we get on the train."

"So it is with death. When the time comes, our wise heavenly Father will give you all the strength you need."(The Hiding Place.)

The Gestapo engineered a plan to trick the ten Booms. A stranger came to their door in need of money for his friend to flee the Germans. Unknowingly, Corrie was conned! Betsie spotted them coming down the road, she hit the buzzer. Everyone dropped what they were doing—and ran. Corrie, at the time, was sick with influenza. She heard the buzzer, it sent her head throbbing, heard the hurried feet of their Jewish friends running past her bed to the secret room. Her head swirling, the realization came in a burst of energy. She stumbled out of bed and sealed the room a split second before the soldiers busted into her bedroom. The Jews safe, she faced the enemy. The hour had come. 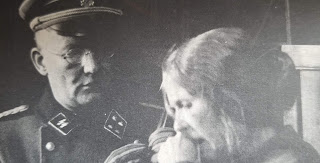 At the interrogation station—the Nazi officer asked her father, "Ten Boom, give me your word you will behave yourself, and you can die in your bed old man, where you belong.

"If I stay behind, I will open my door to anyone who knocks for help."

Betsie's last words to Corrie were, "…must tell people what we have learned here. We must tell them that there is no pit is so deep that He is not deeper still. They will listen to us, Corrie, because we have been there." (The Hiding Place) 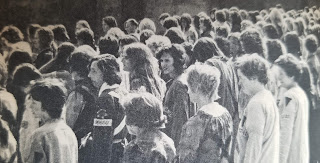 Due to a clerical error, Corrie was released two weeks after Betsie's death. Only God never makes errors. She returned to Holland, and in May 1945 was there to see the Allies liberate her homeland.

Many citizens, like Martin Niemöller, a leader of the Confessing Church, voted for the Nazi Party in 1933 and realized later that looking the other way either for material or social gain will end up hurting you most.

What Corrie wrote in The Hiding Place is true today, "What I spent, I had; what I saved, I lost; what I gave, I have." 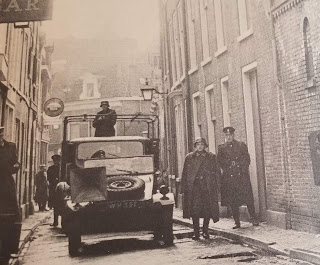 "The world today is on fire. What are you doing to extinguish the fire?"  Corrie ten Boom 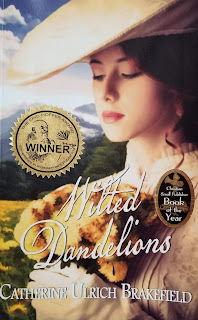 Spinster Rachael Rothburn is eager to leave her life of luxury in Boston to share the gospel with Native Americans in the West. The only problem is the missionary alliance won’t let her go unless she’s married. When Dr. Jonathan Wheaton, another missionary hopeful learns about the restrictions—he offers Rachael a marriage of convenience. The pair sets off for Oregon to share Jesus with the natives, but in the process, they discover God doesn’t create coincidences—He designs possibilities.

“…one gripping, compelling read. Wilted Dandelions by Ms. Brakefield had me eagerly turning pages and sighing over the love story premise as well as taking comfort in the spiritual message—” ES 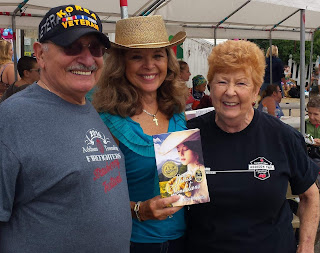 She lives with her husband of 49 years and their Arabian horses in Addison Township, Michigan.