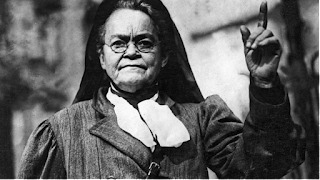 Being from Kansas I’ve always been intrigued by a rather infamous character from Kansas history. Carry Nation, apparently a feisty sort of gal, gained a reputation during the late 1800s by entering alcohol-selling businesses and going after the bottles with a hatchet. Can you imagine trying that today? Yes, she was arrested several times but that didn’t stop her from finding the next barroom or saloon and making a huge mess of shattered glass and spilled alcoholic beverages. 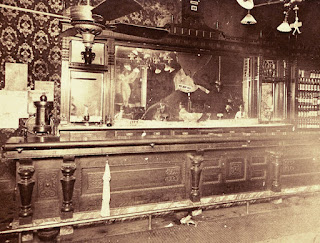 Carry Nation (that’s how she spelled her first name, saying she wanted to "Carry A. Nation" to prohibit the sale of alcohol.) was born Carrie Moore, in Kentucky. Her family was quite poor and it is said her mother suffered from mental instability. Talk about starting out at a disadvantage. But Carry persisted in her endeavors and earned a teaching certificate from a normal school. (Normal schools were an interesting type of college, but that’s another blog.) At the age of 21 she married her first husband whom she left only a few months later because she couldn’t endure his alcohol habit. Ten years later she married David Nation, a lawyer and minister. This second husband would divorce her after 24 years.

Carry hated alcohol and was convinced it needed to be abolished. She became a part of the temperance movement in 1890 after the Supreme Court decided in favor of the importation and sale of liquor. The court decision considerably weakened existing prohibition laws in several states including Kansas where she now resided. She believed the illegality of the saloons now flourishing in that state meant that anyone could destroy them without a penalty being enforced.

Alone or sometimes in groups of like-minded women, she marched into the establishments dressed in black and singing hymns, praying or shouting scriptures, then smashed the bar fixtures and any alcohol she could find with a hatchet. She led her first raid in 1894 at a local “pharmacy.” Nation led the group into the store and announced to the owner, “The ladies of the WCTU want to see what you have in here.” “Women, this is whiskey.” The women overturned a keg, rolled it out the door, and smashed the contents on the ground, which they lit and burned. Once she even invaded the governor’s private chambers to state her case. 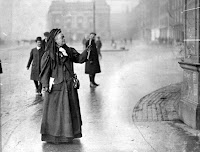 The bar room owners and law-enforcement authorities obviously didn’t buy into her claims of impunity as she was forced to pay fines and jailed multiple times. She often paid the fines from proceeds of lecture tours where she sold souvenir hatchets. The ire of saloon owners and patrons didn’t stop her as she was physically assaulted many times, surviving all such attacks and returning for more. Before she laid down her hatchet in 1901 and took her fight to the printing press, Nation was arrested 30 different times and David Nation filed for divorce on the grounds of desertion.

Mrs. Nation published newsletters with names such as The Smasher’s Mail, The Hatchet, and the Home Defender—and her autobiography, The Use and Need of the Life of Carry A. Nation, in 1904. Her “hatchet” period was fairly short-lived, but it brought her national attention and notoriety. She was much in demand as a temperance lecturer; encouraging her supporters to fight not only the saloons but also fraternal orders, tobacco, foreign foods, corsets, skirts of improper length, and mildly pornographic art of the sort found in some bar rooms of the time. Furthermore, she was an advocate of the suffrage movement and even performed a vaudeville act to support her beliefs.

She died at the age of 64, still famous as an advocate for American temperance and her use of a hatchet to demolish bar rooms.

What do you think about how Carry Nation fought for her beliefs? Respect? Horror? Admiration? Mixed bag, huh? Yeah, me too.

Scribbling in notebooks has been a habit of Cindy Regnier since she was old enough to hold a pencil. Born and raised in Kansas, she writes stories of historical Kansas, especially the Flint Hills area. Her experiences with the Flint Hills setting, her natural love for history, farming and animals, along with her interest in genealogical research give her the background and passion to write heart-fluttering historical romance