Delicious Delicacies from the Tennessee Centennial Exposition of 1897 and a Giveaway!

Here's something you may not know about me: I'm not fond of cooking, but I adore eating! These days I'll eat just about anything put in front of me, especially if I didn't have to prepare it! So it's no surprise that while I dug into the research for my new novel Count the Nights by Stars, the mention of food often snagged my attention away from less yummy historical facts. Specifically, food from the Tennessee Centennial Exposition of 1897, the setting for this split-time novel.

The exposition opened on May 1, 1897 as a celebration of Tennessee's 100th birthday, although one year late. Over 200 buildings were erected on what was once West Side Park, with exhibits that were educational, instructional, as well as amusing. The most famous structure, the Parthenon, still remains in Centennial Park today, its magnificence a reminder of how amazing it would have been to attend the exposition in person.

Various restaurants and vendors were located throughout the exposition grounds. Official documents for the expo declared that "the prices charged for luncheons and meals within the Exposition grounds are reasonable. One may secure a good luncheon for 25 cents; a good dinner may be obtained in all of the restaurants from 35 to 60 cents. The prices are no higher than in respectable restaurants in an American city."

In the celebratory spirit of this World's Fair-type event, allow me to whet your appetite with some of the mouth-watering items the 1.7 million visitors to the 6-months-long birthday party enjoyed!

The Blue Grotto, modeled after the Blue Grotto on the Isle of Capri, was an Italian-themed restaurant overlooking Lake Watauga, the man-made lake created for the exposition. Although the lake still exists, sadly, the lovely restaurant does not. Here, visitors like Priscilla and Luca, characters in my book, enjoyed authentic spaghetti, crusty Italian bread, cappuccino, Italian ices, and other favorites. Studying this picture of the Grotto, I can almost smell the garlic wafting in the air, can't you?

The exposition boasted an amusement section called Vanity Fair. In this area, visitors could experience life and foods from other countries like China, Germany, Egypt, and Cuba. When I was deciding which food Priscilla and her friends would most enjoy, I couldn't stop thinking about the spicy pork sandwiches offered at the Cuban Restaurant. Tender pork, garlic, olive oil, cumin and paprika, all piled on a toasted roll. Oh my!

Other restaurants on the fair grounds offered Egyptian, French, and German food. There were also vendors selling popcorn and peanuts. One of the most unusual and downright weird places to eat was at The Cafe of Night and Morning. This attraction was basically a house of horrors, where undertakers and widows clad in black mourning dresses escorted people through the exhibit where scenes from Dante's Inferno came to life with skeletons with burning red eyeballs and scenes from hell. At the end of the tour, the widow would serve visitors refreshments at a table made from a real coffin with a skull & bones chandelier above. Um, no thanks! Moving on!

As you can see from the menu honoring President McKinley's visit to the expo, all manner of deliciousness was served to the visiting dignitaries. Fried black bass, sirloin steak with mushrooms, sugar cured ham, hashed potatoes in cream, corn muffins, rice cakes with maple syrup. And whatever Graham Gems are, I'll have two, please! I dare say the President and Mrs. McKinley were stuffed when they left the Ohio Building after this meal.
As a history nut, I loved learning about the exposition, but I have to admit the food would have been my favorite part of the grand party!
To celebrate the March 22 release of Count the Nights by Stars, I'll give away a signed copy! All you have to do is leave a comment below and tell me what your favorite food is! US only, please.
UPDATE: Jennifer K. is the winner! Congratulations! Please contact me, Jennifer. The email I sent you was returned. 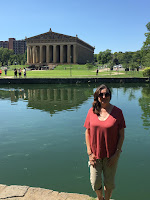 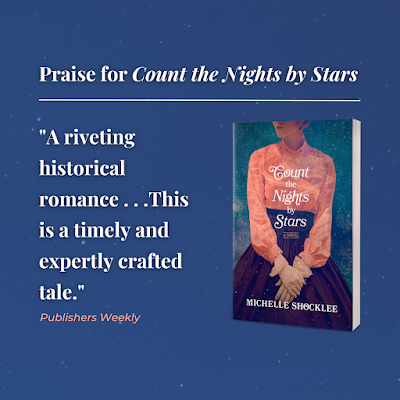 *Releases March 22, 2022*
1961. After a longtime resident at Nashville’s historic Maxwell House Hotel suffers a debilitating stroke, Audrey Whitfield is tasked with cleaning out the reclusive woman’s room. There, she discovers an elaborate scrapbook filled with memorabilia from the Tennessee Centennial Exposition. Love notes on the backs of unmailed postcards inside capture Audrey’s imagination with hints of a forbidden romance . . . and troubling revelations about the disappearance of young women at the exposition. Audrey enlists the help of a handsome hotel guest as she tracks down clues and information about the mysterious “Peaches” and her regrets over one fateful day, nearly sixty-five years earlier.