In November 1942, while attending Chaplain’s School at Harvard University, four men became good friends. Less than three months later, they would be working together on the fast-sinking Army transport ship USAT Dorchester, ministering heroically while saving the lives of soldiers.

These four chaplains came from diverse backgrounds and religious affiliations: 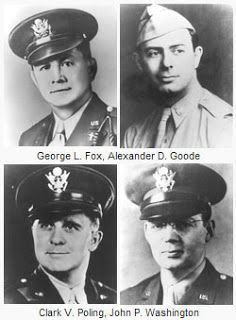 George L. Fox, age 42, was married, with two children. He served in France during WWI as an Army medical corps assistant (enlisting at 17). George earned a Silver Star, a Purple Heart and the French Croix de Guerre for his bravery. He graduated from the Boston University School of Theology in 1934 and was ordained a Methodist minister. He joined the Army Chaplain Service and began active duty on August 9, 1942, the same day his son Wyatt, age 17, enlisted in the Marine Corps.

Alexander D. Goode, age 31, grew up in Brooklyn and made friends easily in his diverse neighborhood. He excelled in scholarship and sports, winning medals in tennis, swimming and track. He married his childhood sweetheart, Theresa, and they had one daughter, Rosalie. Alex became an ordained Rabbi, like his father, and he also continued his education, receiving a Ph.D. from John Hopkins University in 1940.

Clark V. Poling, age 32, was married and had one son. At the time he boarded the Dorchester, his wife, Betty was pregnant with their second child. Clark’s father, Dr. Daniel Poling, was a Baptist minister who had served as a military chaplain during WWI. In high school, Clark was elected president of the student body. After graduating from Rutgers University, he entered Yale University’s Divinity School, and in 1936 he was ordained in the Dutch Reformed Church of America.

John P. Washington, age 34, grew up in Newark, New Jersey, as a member of a poor Irish immigrant family. John worked a newspaper route to help bring in extra money. In seventh grade he first felt a calling to become a priest. After graduating from Seton Hall, he entered the seminary, and in June 1935 he was ordained a Catholic Priest. Father Washington served in various New Jersey parishes. He enlisted after the Pearl Harbor attack on December 7, 1941, and later received his appointment as a U.S. Army Chaplain.

The USAT Dorchester, built in 1926, had once been a luxury coastal liner. But the ship was showing its age at the start of WWII, when it was converted into a military vessel to carry troops and critical supplies across the Atlantic. All amenities were stripped away to make room for as many cots as possible. Originally designed to carry 314 passengers and 90 crew, the Dorchester left New York on January 23, 1943 with 902 people on board—Army soldiers and staff, the Merchant Marine crew, and a few civilians. It was one of three troop/supply ships in the SG-19 convoy, bound for an American Army base in Greenland.

On the evening of February 2, CGC Tampa detected a submarine on its sonar. Hans J. Danielsen, the Dorchester’s captain, placed the ship on high alert and ordered all soldiers to sleep fully-clothed, with their life jackets on. Most of the soldiers who slept in the crowded areas deep in the ship’s hold disregarded the order because of the stifling heat generated by the engine room.

At 12:55 a.m. on February 3, the German submarine U-223 attacked. Two torpedoes hit the Dorchester’s starboard side, killing hundreds instantly and wounding many more. The explosions knocked out the ship’s power, cutting radio communication with the escort ships. Panic broke out as the ship began sinking rapidly. Wounded and disoriented soldiers groped in the darkness, trying to make their way topside on the listing ship.

Amid the chaos and frantic cries of pain and fear, the four chaplains moved among the soldiers, tending the wounded, calming the frightened, and guiding soldiers to safety. Many who survived recalled how the four men prayed for the dying and gave encouragement to those who would live.

Petty officer John J. Mahoney was hurrying back to his cabin to get his gloves, when Rabbi Goode stopped him and gave him his own gloves. “I have two pair,” Goode said. Much later, Mahoney realized that the Rabbi had given him his only pair of gloves, as if he had already decided he wouldn’t be leaving the Dorchester.

Many soldiers had no life jackets when they emerged topside, where they were greeted by an Arctic wind and a tilting deck made slippery by the icy spray off the Atlantic. The chaplains quickly opened a storage locker and began distributing life jackets. When they ran out, the chaplains calmly gave their own life jackets to four frightened soldiers. “It was the finest thing I have seen or hope to see this side of heaven,” said John Ladd, who witnessed the scene.
In less than twenty minutes, the Dorchester was tilting heavily. Many soldiers leaped from the ship and tried to reach lifeboats, which were already overloaded. Private William B. Bednar, who was struggling to swim in the frigid, oil-slicked water, recalled seeing the four chaplains standing with their arms linked together, braced against the railing. They were praying and singing in loud voices, giving strength to the others. “Their voices were the only thing that kept me going,” Bednar said. 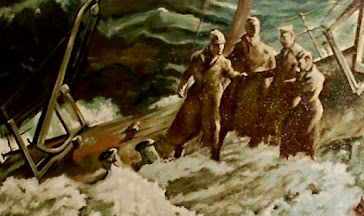 Twenty-seven minutes after the torpedoes hit, the Dorchester slipped underwater. Of the 902 men aboard, 672 died, leaving 230 survivors. The death toll might have been much higher, had it not been for the brave actions of the four chaplains.

In April 1943, two months after the Dorchester’s sinking, Clark Poling’s wife Betty gave birth to their second child, a daughter.
In 1948, the United States Postal Service issued a special stamp to commemorate the service and sacrifice of the Four Chaplains.

The chaplains were not eligible to receive the Medal of Honor because they were not engaged in enemy combat. But on July 14, 1960, the Four Chaplains’ Medal was authorized by a unanimous act of Congress. It was awarded posthumously to the families in January 1961. 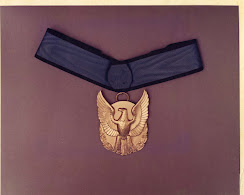 Mary Dodge Allen has received two Royal Palm Literary Awards from the Florida Writer's Association. She and her husband live in Central Florida, where she has served as a volunteer with the local police department. Mary has worked as a Teacher, Counselor and Social Worker, and her quirky sense of humor is energized by a passion for coffee and chocolate. She's a member of American Christian Fiction Writers, Faith Hope and Love Christian Writers and the Florida Writer's Association.

Mary's mystery/suspense novel: Hunt for a Hometown Killer is a Finalist in the 2022 Christian Indie Awards. It is available at Amazon.com: